Developer for an equity. Why yes?! Read more

Hi, I am a product manager from the Czech Republic. I work on an idea stage app about financial platform. In Czech there is a big opportunity but investors want to see MVP and some traction. With Bubble, it is possible but to be honest I don’t have a skillset to build that app. Actually, of course I do but that time I would spend on it doesn’t make sense.

So I would rather find a partner in crime for equity. I got some conditions but I will tell you a little more about the app.

In Czech, whenever you want some financial, energy or telco deal, it is always the same. Lead with a mobile phone and on the other line is a scammy salesman who tries to convince you. I don’t like that and there are better solutions.

I really like websites such as uswitch.com, bankrete.com, moneysupermarket.com and so one.

I want to build a MARKETPLACE for banks, insurance companies, energy or telco firms where they can promote their deals. We can summary, compare and when clients decide to go for it, he/she is redirected through a referral URL and we get some commision for that. No need to make a deal done, for us just clicks stand for a money.

For those companies, it is a cheap way of buying potential clients and for clients it is a place where deals can be found. Simple as that.

I have some concept designs for the app. 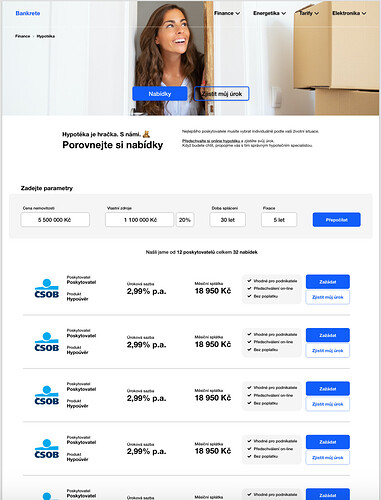 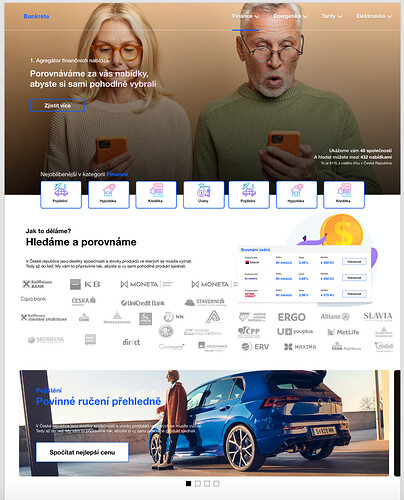 Nice to have is interface for companies to set up deals (as interest rates, product names and so one)

Of course there is a pain in the product variety because something else are loans vs insurance or telco deals. But the concept stays the same.

Who am I looking for? A developer who will help build this MVP. After investment I will pay you off.

But if you are also a react web developer or backend dev, we can work in the future when the platform would be rebuilt.

I can manage the product and acquiring partners in Czech.