Displaying data that is searched for

So I am working on creating a referral system. When a user signs up with a code sent to them by another user, that code gets saved as a thing in their user database. What I am trying to do is have the user who referred them get a display of the users they referred and be able to use a coupon.

What I have set up now is a repeating group. This group searches for the current user’s referral code.

Then, I have the cells with text boxes and buttons to display the current cell’s user name.

However, when I preview with a user who is logged in and referred a customer, their name doesn’t appear in the list.

In the specific example James Lusk referred Juan Valdez. Juan Valdez does have Jame Lusk’s referral code saved as his promo id. But as the image above demonstrates Juan’s name does not show up on James’ list of earned coupons.

Thank you for any help!

Here are screens of each user’s data as well: 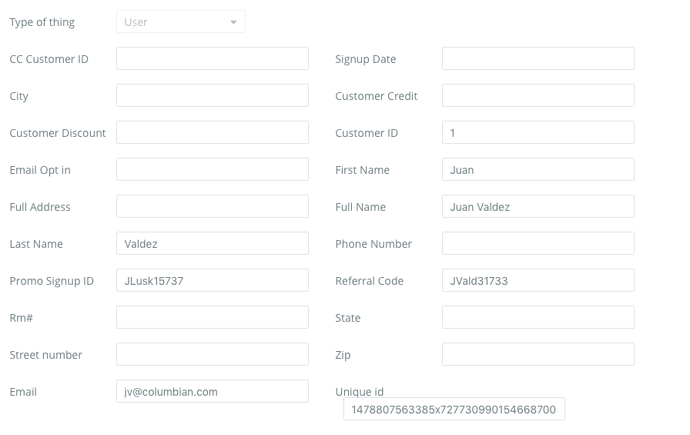 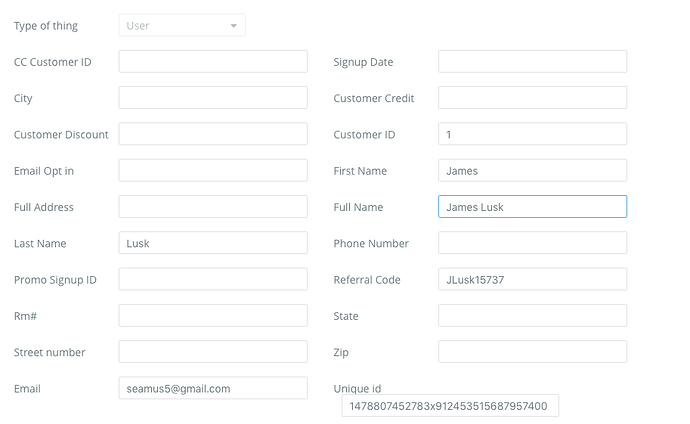 Everything looks like it’s set up correctly - hmm, maybe double-check if the repeating group is visible on page load, or double-check that you’re logged in with the correct James Lusk’s credentials? Do you have any data privacy roles set up which could be affecting what’s displayed?

Nope, it is visible on page load. And I am logged in correctly, as the James Lusk’s referral code is displaying in the input box set to ‘display current user’s referral code’.

No data privacy roles either. Didn’t even know that was a thing. Are there any set up by default?

There aren’t any set by default - you can set them up to make sure only certain data can be viewed, modied or searched for depending on who is logged in. I’m not sure what this could be - Can you share a link to the editor?

Actually it was permissions. @skylershelton and I just spent and hour working through this and got it working. Apparently he had adjusted the permissions and I wasn’t aware of it.

Thank you so much for you help with these! We are building some stuff that is seriously exciting for us, and your wisdom and guidance as well as everyone else’s here is making it possible. We really appreciate it!

My pleasure James! Glad you got it all figured out and I can’t wait to see what you all build!