is it possible to save element templates?

Inside your app? Yeah, that’s what reusable elements are for.

Just wondering if theres any update on this?

Nudge. Does anyone know how to create these? Or is that a potential feature request?

@rico.trevisan This is currently on the Bubble team’s roadmap under “Reusable element plugins”

See here what is new with Bubble and what is next. Bubble is a visual programming tool that lets you build dynamic, fully functional apps without any code.

Thanks for looking that up!

It is awesome to see their roadmap. It is like xmas will come every week (sprint? month?).

I seem to remember seeing it under “Next” too awhile back on the roadmap. It looks like it disappeared from it altogether now. I am wondering if the thought behind removing it was that “Reusable elements”, or even copying/pasting, could fit that use case as a workaround, but the use case for element templates is actually quite different. At the very least, it would be nice to “break sync” of reusable elements so they can be edited independently. It is also a little weird to see a permanent template list with only two items in it and no way to add to it. Element templates is the only list that is “off-limits.”

Here’s an outline of the element types in attempts to show the gap being left by Element Templates, as well as some of the advantages as it relates to the other element types.

Reusable Element - A group of solidified “atom” elements that make up a larger element (molecule or organism) and serve a very specific and rigid purpose. Only editable on a dedicated page in which changes are applied globally without the ability to break sync.

The Missing Link: Element Templates
Since these already exist, the petition is for the user’s ability to make additions to the list much like the user makes additions to an application’s “reusable elements” table. There are integral development and design goals that can not be accomplished currently without building the same organisms repeatedly, or copying and pasting. However, copying and pasting organisms makes for even less efficiency than copying/pasting atoms (e.g. buttons).
Use Cases for Additional & Custom Element Templates:

@emmanuel there are two things, reusable elements and elements templates. I understand the difference between them

I don’t. Can someone explain the difference between element templates and reusable elements?

@shot Element templates are a collection of pre-designed elements with workflows like a signup/login form that you can use in your app to speed up development. Bubble gives you these and we aim to support them in the marketplace too. A reusable element, can be built by you for your app and creates an element that contains other elements, like a group, that can be used in more than one place.

I think I got it now. Thanks.

Just wondering, will this be re-added to the roadmap anytime soon? Even just having the option of “un-syncing” a reusable element, so that it can then be edited independently would be an extraordinary time saver. Currently, if following a design system, the same modules often need to be rebuilt each time they are used, and it would be really really awesome if the patterns could be dragged/dropped in like the already existing element templates, (and if we could add to that list).

I have a very clunky workaround, for those in-need…

Let’s say you want to create an element template for a pop-up. This popup template will have a title, close button, some body text and an action button. 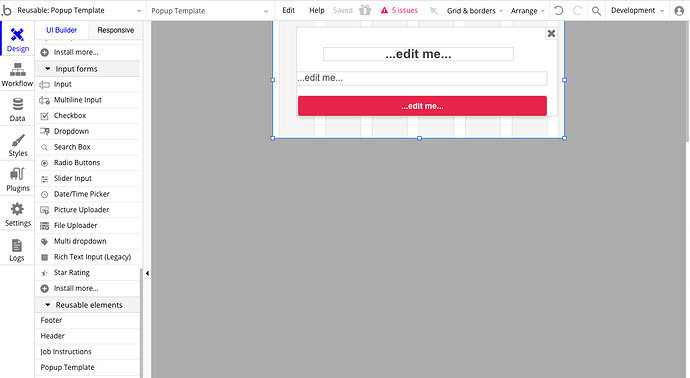 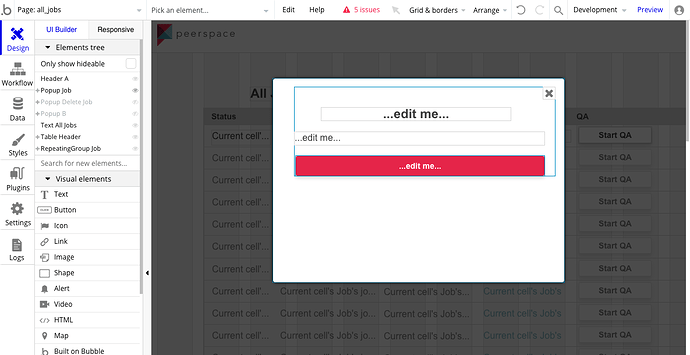 It’s terribly clunky, and none of the workflows transfer. But it may still save time on designing a group of standard components and store it in an easy-to-access location.

An “un-sync” button from a reusable element would be much nicer.

You should be able to transfer the workflows as well if you right click > “copy with workflows” and “paste with workflows.” I do something similar using a separate page in my app dedicated to my design system.

Unfortunately, it still doesn’t provide the ability to make changes to a master instance and have those changes be reflected in all uses of the component throughout the app.

@emmanuel, is this something that will be re-added to the roadmap? It would appear to have high value for a number of users.

In terms of use cases, think of it as the “option sets” data feature but for components, or the “symbols” feature in the Sketch App and Invision Studio. It enables design system language use.

Agile Story: (Note: a reusable element or copy/pasting does not satisfy this criteria)
As a user, I would like to be able to create and manage (CRUD with global impact on my app) my own “Element Templates” (with possible overrides per instance) so that…
1) I can avoid the redundancy of recreating the same organisms and their logic/workflows in multiple locations of my app. (e.g. all my popups have a “close” icon in the top right).
2) I don’t have to rebuild an entire organism (e.g. confirmation popup) when the difference is minor, (e.g. popups that only differ in their text content).
3) I can make workflow/logic changes to an already created organism in one place (master), and it have global impact across my app while keeping certain other variables/overrides intact (e.g. changing the label of the primary CTA button in every “confirm delete” popup modal instance of my app from “Confirm” to “Delete.” Or changing the duration of an animation on all popup modals.)

This is definitely something valuable, and we’d love to do this, pretty sure we will one day, but can’t commit when we’ll get to this yet.

On a related note, check out what the crew at OpenBuild.io put together:

hey community! We’re extremely excited to launch the production version of openBuild. After the beta, we implemented your feedback and tweaked the concept a bit. Today we soft launch on the forum! As an agency we focus on building great design and this is at the same time one of the biggest challenges in Bubble. openBuild offers a solution. It is a UI builder for Bubble. It is a Chrome extension and web app that adds UI building superpowers

to your Bubble editor. Here are the …

Yes, this is indeed part of what we are trying to solve with openBuild. And parts of what you suggest we tackle with it already.

Bonus: This is something we work on now. Importing element templates you can already do with openBuild. You can create your own library of elements that you can reuse in every other app you connect to openBuild and if you use the openBuild Styles (you can get those from the openBase Framework template) you can tweak those styles to whatever style you use and it would turn all the current openBuild components into your style as you copy them in your app.

This is how we are going to introduce new styles. Take the framework template (or the coming soon pro template) and change all the styles (not delete!) to match your own style guide. Then your own components should be matched to those styles and all the existing styles will match your styles when you paste them.

The beauty (if I say so myself

) of this system is that when you store a component in openBuild, it stores it with styles and also with inline styles. This means that when you paste your component in an app with the openBuild Styles, it matches the dynamic styles (and you dont have the errors) but if you don’t have the openBuild styles, it pastes just with inline styles so the component looks exactly as advertised. But you lose the scalability of having unversisal styles.

You can test openBuild for free to see if it matches some of your needs!

Just stumbled upon this thread and thought I’d add my $0.02 worth…

Not to suggest that Element Templates (ET’s) wouldn’t be a useful feature, but in my experience, reusable elements (RE’s) can go quite a long way toward achieving the functionality you describe.

With the ability to change the appearance and visibility of an RE’s “sub-elements” via workflows and Conditionals, RE’s can be made highly “configurable”. Specific custom states can be “exposed” by adding them to the RE so they can be initialized/manipulated in the context of the page on which they’re placed while keeping other custom states “private” to manage state internally. Additionally, custom events can be used to allow the “host” page to alter behavior and/or appearance.

In fact, the popup modal example you cite would be pretty straightforward to make configurable, since button visibility, caption, and appearance can all be dynamically set.

it can be done but, in my experience at least, makes for very long workflows