I would like to create lists of database objects that have references to other objects of the same type. Is there a way to create such lists dynamically and add them to repeating groups as data source.

Let me give you an example: genealogy. I do have a User data type. Each user has the fields parents (list of User) and children (list of User). You can see an example in the screenshot. 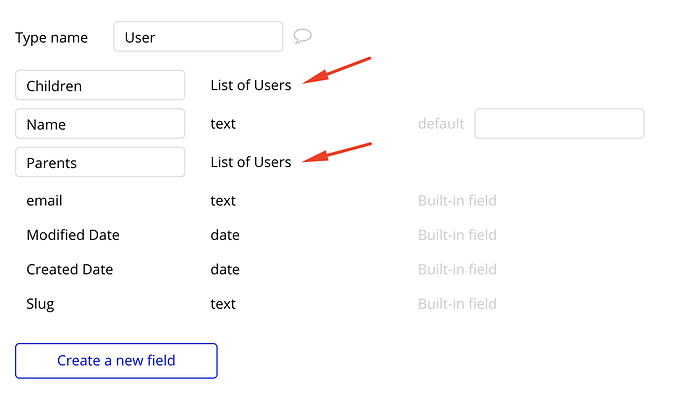 So, my questions would be:

Thanks very much,
Marco

I saw a nice plugin that may be of some use for your project.

Thank you so much. I really appreciate the effort. I’ve been trying to find ways to get around this myself for the past few days, but it would be great to figure this out. For my use case, I can’t have the sliding bars and need to be able to see the chart zoomed out. It’s so frustrating because this plugin is perfect aside from that small feature, and I really don’t want to have to try and build one from scratch when this plugin is available

As I said, happy to pay or even try t…

Database wise, as you say, each person has a parent and a child list, and from that the family tree will propagate with the correct repeating groups.

Have you found a solution Marco? I’m trying to develop the same thing on Thimo’s OrgChart Plugin, but it needs some slight tweaking for my use case. Would definately recommend for your case though.

Let me know what you figure out