Is there any way to allow users to create new entities via text command?

Advantage: Allows rapid plot development. User can focus on story crafting and can work very quickly once they learn the commands. Export support for Scrivener and other tools.

Imagine a Trello-like setup with cards.

In an example card, call it “Inciting Incident,” the user can type #C CHARACTER NAME} and the app automatically:

In this way, the writer can easily create new characters, events, locations etc without leaving the window they’re in.

Card title is Inciting Incident. This is an example of what the customer might type…

“Detective #C Charlie Brownstone} wakes up #L at home} to find an unusual notification on his phone.”

Desired behavior: The app leaves “Charlie Brownstone” behind in the card, and #C } are removed automatically once the app parses the command.

Is this level of no-code possible? Or might I need some Java script under the hood?

Edit: I see that typing # in this forum brings up a pop up. That is encouraging. But any insights into how to do this in a workflow would be greatly appreciated.

Yes, I think this is doable!

You can use Bubble’s new plugin (Mouse & Keyboard Interactions) to trigger a workflow thru customs keyboard shortcuts. So the authors will be able to perform a bunch of actions very quickly.

And one of this actions may be exactly “create new character” thru a “CTRL + N” ( as an example).

So when an author presses “CTRL + N” you can trigger a workflow that will get the character name that in between #C and }. You can try this using the command :extract with Regex

After this, the workflow could insert this character in your database and so on…

So when an author presses “CTRL + N” you can trigger a workflow that will get the character name that in between #C and }. You can try this using the command :extract with Regex

Thanks so much! This is amazing. And I’m really happy to see that plugin.

If you have time/inclination, could you elaborate on exactly how to start the workflow?

I have set up a command, CTR+o, but I don’t see how to tell it to extract data from the text input field. I’m stuck on how to tell it how to connect the Ctrl+o command to what’s in the text box, if that makes sense.

Anyway, I really appreciate the help so far.

I didn’t installed the plugin. Don’t have much experience with it…

But you may want to take a look at the documentation (here) and also do a search on Youtube.

For what you wish, you will need to FIRST know how to read and store the input’s value as a custom state. After, work in how to extract the part you want. You will use something like this: 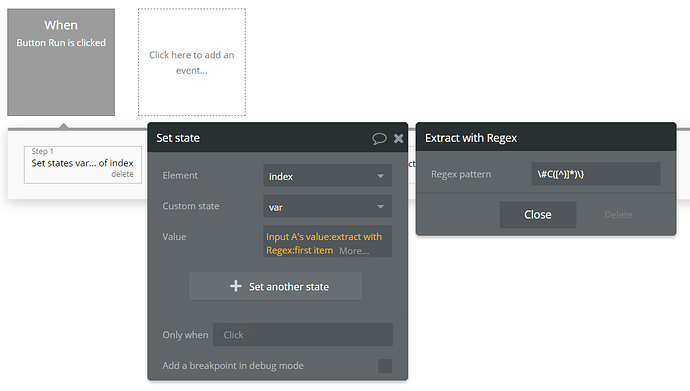 After make the extraction, you will have to get rid of the #C and }.
Use the command :find & replace to replace this to a blank value… 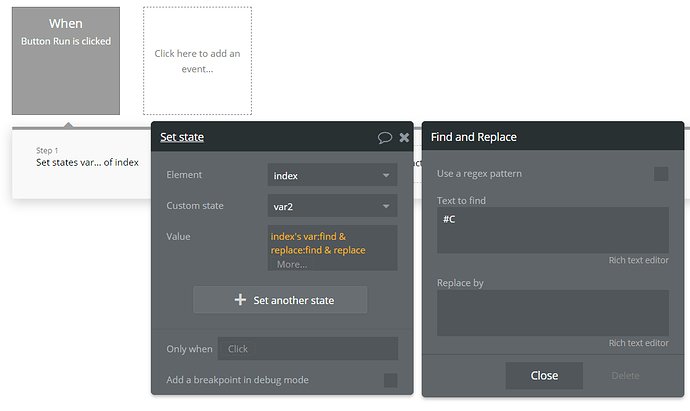 This is the result I had:

Thanks so much for this! I’m a writer/editor. If you need anything edited or written around ~1,000 words or so let me know. You’ve been a big help.