So I’m trying to send a simple base64 encoded json to an API. I have tried several methods, but currently my setup is as follows:
I have a type defined with a bunch of properties. The workflow I’m in is executed while making a new instance of said type. I make an instance, and then create a json by entering dynamic values from that created type into a text field with a valid json format. This json is then sent to the Base64 Encoder element from the Base64, Hash & HMAC Encryptor plugin. The output is then read from that element and sent to the API using the API Connector workflow action that I defined in the plugin view.

This does not work, but what is fascinating is that I can run through the variables being passed back and forth with the bubble debugger to test every single value being used, and all seem to be correct. If I copy the json before it’s encrypted, manually encrypt it myself and send that to the API using the API call, everything works fine. If I copy the json after it’s encrypted by the encryption element, put that as a static string into the API call workflow action, it also sends the call just fine. The only situation that doesn’t work is the one I need, a dynamically generated JSON based on the provided instance.

I’m completely confused, hence this post. Is there some difference between supplying a value as a hardcoded string and as a dynamic variable? If so, how can this be and how can I work around it?

Did you ever find a solution here? I’m facing a similar issue working with the Twilio API.

What am i missing out. below is screenshot of the plugin congif 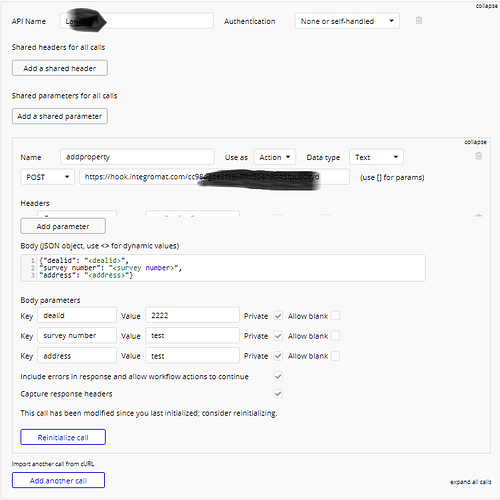