Hope you are having a good and safe new year. Happy to introduce a new version of BDK Native Apps - v1.9. This release brings new capabilities around deep linking and growing your user base. We have integrated tools from Firebase such as dynamic links, analytics, and in-app messaging. All of it in the same seamless no-code, no-complexity fashion

Details of the v1.9 release are here.

We wrapped up 2020 with customers of all sizes, apps of all kinds, all the way from New Zealand to San Francisco. BDK Native is now used by bubblers in 35+ countries, across all continents. Antarctica however, is still beyond our reach

Looking forward to working with more of the bubble community in 2021. If you’re haven’t heard of BDK before (or in a while), do check it out at thebdk.com

The “Offline Detection” feature doesn´t appear in my workflow element. How can I solve this?

P.S. I´m from Mexico
Thanks in advance

Does your product convert Bubble’s html dom to native code or is this another Webview wrapper with some native functions? Are you using jasonelle also?
https://jasonelle.com/ or perhaps cordova?
https://cordova.apache.org/

What I am after is something that can create clean IOS code without wrapper from Bubble code. This is mainly for performance and general styling, less limitations. From what I have seen by your exhibitions these apps are clearly webview based, maybe i’m missing something here to your expensive price.

Would you think about creating a good fullproof service by Nativescript or React Native?

Webview apps to me are just so much inferior to native code. This a very old obsolete approach.

I don’t believe any tech exists today (atleast to my knowledge) that converts html to native code. That actually doesn’t make any sense from a technical standpoint.

If you want to use Nativescript or React Native why even bother with bubble? There are no-code pure native code generators like Adalo, Thunkable etc. If you’re looking for native code, bubble is not the right place to look. The only place for bubble in such an approach is as-a-backend. For this you’re probably better off using a non-bubble solution like AWS amplify admin or something else so that you have unrestricted access to your backend with great performance.

BDK Native isn’t just a webview, but rather a native environment that plugs into the bubble app. There are lots of native feature & modules of the device, which bubble app gets to control. Also, our customers don’t need to do technical stuff like app compilation, deal with provisioning & keystores, or generate certificates. This is the same philosophy as bubble wherein a bubbler doesn’t need to provision databases or servers to build webapps.

The objective behind bdk native is to extend the power & flexibility of bubble into the native environment without reducing the speed of development and iteration for bubblers. Hence I don’t have any plan to remove bubble from that equation. Fwiw regarding price, by the time you are done with a 4-hour introductory meeting with a react / pure native developer, you would have already spent more on development than entire bdk native solution.

Webview apps to me are just so much inferior to native code. This a very old obsolete approach.

I’d recommend also to take a alternate perspective from bubblers who have built bubble-based apps & native apps. They serve tens of thousands of users, while already fundraising and without having spent thousands of dollars on hiring coders. I think the response you will hear is that native code is superior in performance but vastly inferior in building & iterating a business fast.

The “Offline Detection” feature doesn´t appear in my workflow element. How can I solve this?

It should show up in your list of bubble events for workflows if you have the native apps (bdk) plugin installed and placed an app info element on the page. Here’s where you will find the workflow trigger (just search for BN) 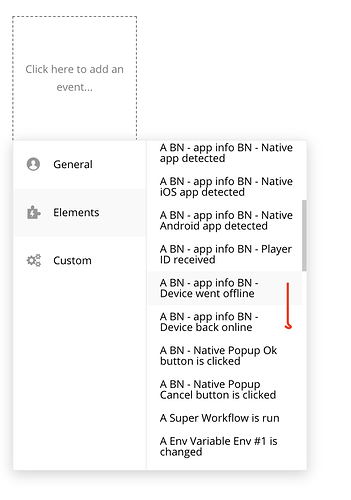 I think your bubble development environment is password protected for version-test site. Thats why it shows blank (since you can’t enter username password on that browser prompt). You’ll need to either deploy live or remove the password protection from your version test site in bubble settings.

Ohh, thanks @gaurav. Now it works

Thanks @gaurav, just giving this plugin a go now.

We are also wondering about the build fee you show here: https://www.thebdk.com/. Do the fees shown take our existing bubble app and get it compiled as a native app on iOS and/or Android? That is essentially a one-time fee, and then we bay for re-builds as needed?
Thanks,
Jon

@gaurav Question on the native transitions - I’m currently testing the BDK app you’ve built for me. I’m finding that using the native page transitions (i.e. ‘BN - Navigate to Link’) to move between pages in my app increases the page load speed by an average of 30-40% in comparison to a standard ‘Go To Page’ link. Are you aware of this feature causing page speed issues, or is this an issue with my configuration?

Hey @gaurav - I‘m a HUGE fan of the BDK native and I was wondering if there is any way to hide the scroll bar (on pages & repeating groups) for an even smoother app-like user experience?

Thanks in advance and utmost appreciation for your work

Hi @gaurav how are you? I’ve just installed the bdk app in order to preview my app but I’m struggling a bit to show the page as it should. For some reason, sometimes the content is shifted upwards. I’ve tried other similar services and this is not happening. Do you have a clue of what could be going on? Thanks!

A long time ago there was an issue with native apps running OAUTH signups… not sure this even got fixed (this was 2016!).

Can a BDK wrapped app use the OAUTH signup page on another Bubble apps which is a web app?

Is there a way to make the status bar transparent? Get rid of the white strip?

@gaurav I’m hoping you can help me out with a testing situation I have.

I’m building an app which has a Buddy system. Users can search for other users and request to add them to their Buddly List.

I’ve managed to get BN Push Notifications working - somewhat - in that I can send a notification when a user sends a Buddy request.

But, when I’m creating a new user, I’m getting the oneplayerID from the appinfo element and storing it against the user.

The main issue I’m having is trying to test this out. The oneplayerID that is getting stored on user creation is the same for every user, I’m guessing because the oneplayerID in the appinfo element is always the same on the device that I’m testing on. And hence when I send a Buddy Request every user I’ve created on the same phone gets the notification.

Is there a way I can test this properly - currently using he BDK Native App via testflight - so that I can properly test notifications are only going to specific users.

I’m thinking that it needs to create a unique oneplayerID per user signup when a new user is created but not sure how to go about this.

Looking forward to your response.

Im having a similar issue with the Loading screen not disappearing dispite the remove loader triggered on page load.
It only seems to be a problem on the android version.

Did you ever get a solution for this issue?