I am using the plugin to pull all nfts from a contract. I’ve previously tried to pull this data straight from Moralis’ API but between the 100 record limit, cursor, and backend workflows being soooo sloooow in bubble, this plugin is essentially my last option.

I have logged into the SDK. I have the app url and app id added to the plugin.

Hi, Is this plugin compatible with moralis sdk ver2?

hey I am trying to run the workflow to get all NFTs from a specific contract owned by the user currently logged into metamask and I’m not getting any results. Below is my setup: 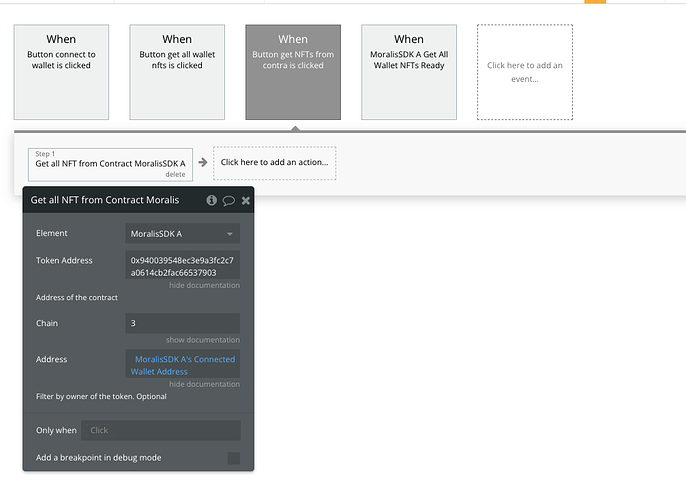 However, I am able to run the workflow to get all NFTs from wallet successfully with similar config (except the required contract address). I’m running this on rinkeby and can confirm the contract address to be accurate. Any suggestions? https://rinkeby.etherscan.io/token/0x940039548ec3e9a3fc2c7a0614cb2fac66537903

I has also tried Web3Modal + Web3&Metamask to do Write calls to my custom contracts, but such combintion seems not realiable, sometimes it get stuck and there is no popup in the Wallet to confirm the transaction

Hi,
First thing, try to to this combination but with Web3Auth instead, it is more stable.
Note that if you are connecting through social networks such as gmail, the confirmation won’t popup and the action will perform automatically.

We at NovaBloq think that running any interaction with smart contracts is more powerful when doing it directly with such plugins as Web3 or WalletConnect, rather than via SDK such as Moralis, which is constantly changing and is way more limited and on top of that requires a monthly subscription the price of which can significantly increase with the growth of users of your app.
So, we definetelly recommend to debug any issues you have with web3 plugin, we can definitely help you with it (join our Discord for faster communication)

Hi, please send me in PM a screenshot with the parameters you are using to run this aciton.

I already moved on.

any suggestion on my question/

Hello, In your Moralis SDK plugin set up instructions, it is written to add " 1. First thing, you need 2 keys to run the SDK, you will get for free on moralis.io
“App ID” and “Server URL” Get them and insert in the plugin settings."

However the new version of Moralis doesn’t have app server anymore, just a Web3 API key. How to use this one to connect your plugin to Moralis?

However the new version of Moralis doesn’t have app server anymore, just a Web3 API key. How to use this one to connect your plugin to Moralis?

It is still required in the SDK version used in the plugin, I have updated the plugin instruction on how to get the Server URL.

We will push a global update to newer SDK a bit later.