@fayewatson @dan1 bug is fixed – thanks again for reporting it!

This is great news, I have been waiting for this one.

Awesome guys, thanks! Just a suggestion, if I may, to make the thread title more general as users might think it’s only for using with charts whereas it could be very helpful in some cases for repeating group data sources, or for doing certain calculations etc. Super helpful!

Most of the time, when the agregartion is by Date, the starting date will be the first date in time. So here my idea @josh, offering dropdown options :

and the same for Ending Date : 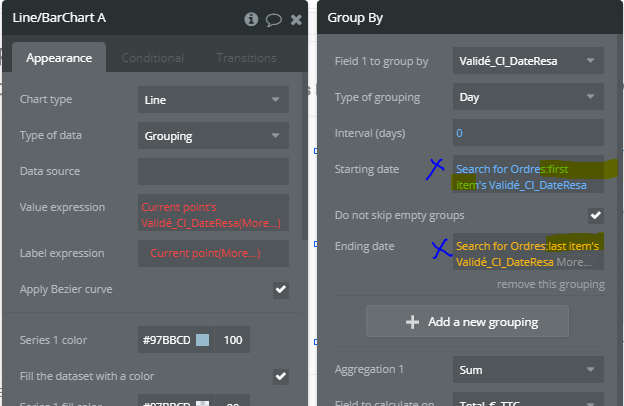 I’ve dreamt of this day. Thanks so much guys - amazingly powerful and saves all sorts of painful database workarounds (creating calendar days etc)…

So happy about this update ! Thanks a lot

In the “Type of data” dropdown I don’t have a “Grouping” option and I also don’t have the “'s count” option in the Value expression field. Seems I’m missing something obvious here…?

Also checked for a new Bubble release, but seems I’m on the latest version already.

@gxjansen Add “grouped by” after your search expression. Once you do that, the Type of data will change to Grouping. It’s not one you can select from the start.

When you add an Aggregation for “count”, then that will become available as well.

The example from @josh will show the total users per day that have been created on that specific day, so the line will go up-and-down. How do I create an aggregate chart that shows the total registered users on that day (so including all the previous days)? I thought this would be by replacing “count” with “sum”, but that forces you to pick a number field in the user data type and that’s not what this is supposed to do…

Ok, this is a GREAT START! but why only in charts??? When can we use it as a constraint as you would in an SQL Query??

It’s actually not limited to charts, can be used wherever you can do a search.

Oh. I’m not seeing that.

It is a modifier after you do the search, similar to :filtered, there is now :group by

Got ya! I retract my previous comment! THIS IS AWESOME!

I´m really excited about this feature, however I think I´ve found some bugs:

For example I have a data type called Sales. Each Sale has a text field called Micromarket (Micromercado in my screenshot). If I group by Micromarket and then go and change that field´s value in the database for a particular Sale, the RG then shows another line for the Micromarket, but it should´ve aggregated the sale into the already existing Micromarket, not create a new one.

Refreshing the page doesn´t solve this. However, deleting the RG and setting it up again does fix the issue.

If I change a value used as an Aggregation, the RG refreshes as expected so there´s no issues here.