Quill is not defined

I cleaned the cache, refresh, force refresh, close and reopen the editor and the browser : nothing helps… Completely stucked…

@gaurav : could you please help ? This is a simple setup : text editor in a popup , no autobinding, HTML contents

Hi @gaurav. I was hoping you could help me understand a couple things. On the @ mention feature, when setting the list source, is it possible to refer to an API than a custom data type? For instance, could I set the source to an Instagram Graph business search? Also, I’m not seeing the option to subscribe to the plugin right now. Is there a reason for that? Thank you!

Hi everyone,
I´m uploading hundreds of blog post from a wordpress environment. Using Bdk text Editor to shor original content. Images and text are well shown but css styles won´t work.
ANy thoughts on how wolving this?
Is there a way to keep same styles than original blog content?

Another superb plugin! Minor observation here: I have auto-grow mode enabled. When I put focus on the text editor it starts with one line perfectly. If I then hide that text editor and show it again, it has two extra blank lines, without having changed any data. Have you encountered this before?

@gaurav Can we add a custom tag? We’d like to use a cashtag ($) for stock symbols instead of a hashtag.

by having a “link to profile” field in my user database - but can I adjust something to get that click on link to not open in a new tab but rather in the same active window?

Hi @gustafsson.m.johanna,
Unfortunately not as of now. But I’ll look into that as a potential option. No eta on a new update to this as of now

How to purchase? The link is disabled

Hi @mccsunmedia I think you can subscribe to plugins once you’re on a paid plan. If still running into issue, please reach out to bubble support as they handle plugin marketplace

Any updates on the jumping action?

what should be the problem?

Can we please have an option for hashtag, mention links to open in the same tab?

Also, any chance you’re improving the way drag & drop images are saved to db? Saving as rich text is not ideal. In fact, if someone uploads a gif I basically have to file a support ticket with bubble because the db can’t handle so many characters in a single field on a table.

Images are uploaded to bubble db only no?

When you insert a mention, what does the “index” refer to in the delta rich text ? How do you calculate it ?
I’ve noticed the “index” value becomes “data-index” in the html.

I think that’s autogenerated by Quill so not entirely sure how they go about calculating the index. Glad to hear the plugin is helping

Any updates on the fixes for inline HTML in regards to the image alignnment and autogrow issues? Your plugin is by far the best one I’ve used, and these fixes would definitely lock me in.

I can’t succeed in getting the BDK Text editor working, I always get the “Quill is not defined” error message, and the editor doesn’t display at all.

Most likely there’s something else on the page (e.g. bubble’s new rich text editor) that is conflicting since it also loads the Quill library but in a different configuration.

On the @ mention feature, when setting the list source, is it possible to refer to an API than a custom data type?

Not as of now, since its depended on the _id attribute (bubble’s unique id) of the data type and the api response wouldn’t have that. Maybe try adding _id in the response of the api server if you have control of it? I don’t know if that would work but who knows!

Also, I’m not seeing the option to subscribe to the plugin right now. Is there a reason for that?

That’s surprising. Probably something for the bubble team to look into, since the plugin marketplace is handled by them

Did you mean the css styles from the Wordpress page? Somethings to check would be to make sure the stylesheet for that css is added to your bubble page. Another would be to check if the stylesheet still applies given the CSS specificity rules (i.e. the more targeted the style, the higher priority it gets)

When I put focus on the text editor it starts with one line perfectly. If I then hide that text editor and show it again, it has two extra blank lines, without having changed any data. Have you encountered this before?

I haven’t but top of my head potential reasons could be some workflow adding content / some conflict if you have the bubble version of rich text editor on the same page.

Separate point - I’m using a Vanilla Bubble text field to display the value inputted via a BDK Text Editor element. How do I get it to not show up like this? I tried setting the text editor from rich text to plain text and it made no difference. Thanks!

@gaurav is there something wrong with the plugin now? The tagging @ feature stopped working today. Thanks for your help!

Is there a way to prevent the user to upload images by pasting in the editor? 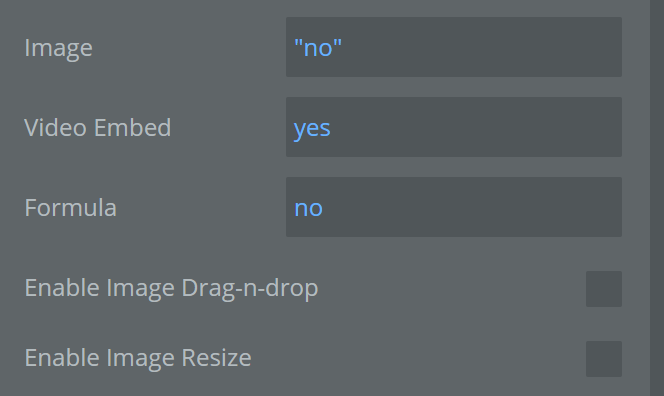 Any ideas on how to fix this / use a workaround?

Hi @gaurav and everyone(!),

I have a string labeled ‘text’ coming in that can be either HTML or plain text. I want to edit this field in the editor and save the resulting HTML.

How do I tell the editor to just treat the Text as HTML (covert it) if it happens to be plain text?
If I don’t clearly specify the ‘Initial Content type’ (HTML | Rich | Text) beforehand - the editor opens blank / empty.

I assume I somehow need to run a regexp on the string and change the “Initial Content Type”?

How are others doing this?

@gaurav I’m trying to work out how I can represent an email format in your editor and it appears the line height is hard coded at 1.7. This is too big and is causing me issues. Given you put all the other formats in the plugin’s settings can you please add one for line height. Seems quite a basic thing and I am sure many others need/want this level of control. Not going to be able to use this otherwise.

Are there any news when next update can be expected?
We also suffer greatly from jumping bug, since we use this text editor in many repeating groups and practically every page. It feels, that if the editor would never scroll page at all, it would still be better than this, because then users could scroll down by themselves… maybe somebody has found a workaround?

Hi, @gaurav /anyone, does anyone have an issue with this element and the page/group size for mobile?
When I use the text editor on a larger page (ex. 1200px), it works fine and is responsive, but when i have it on a mobile page (element size is (345px width), I can’t get the dynamic text to work (@mentions, #hashtags or :emojis). No amount of toying with the size, stretch to fit or autogrow has worked yet… Anyone had this issue before? Did i miss a note about function on smaller screen sizes?

Probably need a paid account, i was on hobby plan and found out the hard way lol

@gaurav any update on speed?

Seems that the plugin is moving extremely slow on our end. I’m even loading a hidden input with the data I need to load in the rich text editor, but it’s then taking an additional 5-6 seconds after page load to load a post and comments.