Looking forward to those accents.

Have a nice day.

I am having the exact same issue now when attempting to use the nested field option. Copied settings from your demo but still receiving the TypeError similar to Zavitac. Are you able to assist me in resolving this issue?

Thanks! Sorry for my very late response!

highlight color does not work well

Could you send by DM the colors you are having trouble with?

The color wanted was #449EDA, to get a similar one (by try and failure) I had to set #185A66.
I tried again with the new version, but I get the same trouble.

So when you load data in a Bubble Repeating Group with the Layout styles Vertical scrolling and Ext. vertical scrolling, Bubble will actually lazy load the Data. Whereas if you use the Layout style Full list Bubble will load all the Data before displaying the Repeating group. This is exactly how Plugins fetch Data. Did you try loading the 15k records in a Repeating Group with the Full list Layout? The loading speed should be very similar to the Plugin.

In all cases, I agree that lazy loading the Plugin would be nice and I’m in continuous discussion with the Bubble team to see how Plugins can be optimized, but they are putting almost all their effort in optimizing the app builder…

Thanks for your effort on this.

B) No update when data source is zero

I will investigate, but I think you might be right this could be a small bug that was introduced.

Thanks, great! I checked that in the last version is already working nicely.

There is actually a Data is loaded Event. I’ve also added an Exposed state Data source loaded on the updated version 1.3.0 of the Plugin that should be published soon, I’ve been so occupied lately and want to add most of the feature request that was asked (i.e., Accent Insensitive, Ability to toggle autoFocus, loading optimization, and more).

Yes, I was using the Event to save it in a custom state Yes/No, but it was just setting Yes when the first data is loaded, but not for every change in the source (conditionals changing the data source). The workaround I used was preloading in a search element, and using here the Event to set the custom state.
Now I tried the Exposed data “Data source loaded”, thanks, this is lighter because it does not need the Event (to save it in the custom state). However, I still need the workaround of preload search element, because once the “Data source loaded” value is set on Yes in the first load, will always keep Yes even if the data source changes.

Also, I think I noticed an improvement if the plugin, now preloads all the data even if the conditionals have not been triggered yet ¿?
I was using the mentioned workaround (preload in a different search element) for doing this, it would no longer be needed as far as I see, except for the “Data source loaded” trouble I mentioned before.

Pitty, I found that useful. Maybe it can be kept to be used in not too long inputs (names, title, etc.), with a warning in the editor, to notify users to not use this in large inputs.
Though maybe I’m not understanding this completely, how works the “Search threshold” in relation with this?

As other mates mentioned before, my opinion is that speed is the top priority in this matter (loading data/searching).
Though the feature for accents insensitive you are working in, will be great too

Trying to make it work with data coming from an API (another Bubble app as a matter of fact), but without success. Do you have any setup examples for API data?

I’m getting the following error:

How do you configure the fields into which the search is supposed to happen? The search fields disappear when using API data as a data source. 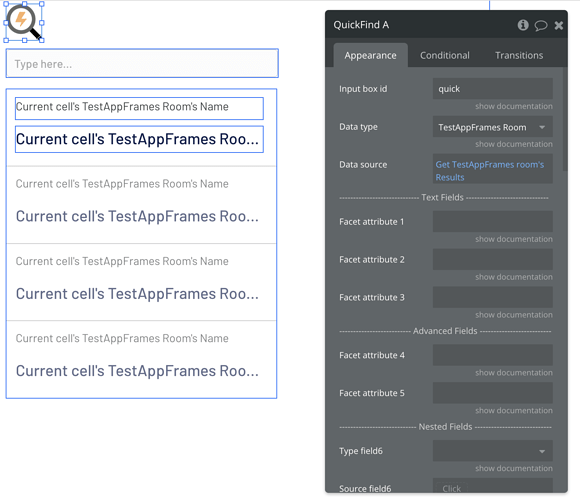 Is it possible to combine several quick find elements to achieve more than 8 fields search? i can see that it can search only 8 fields.

And the RG data source would be: quickfind_1´s data merge with quickfind_2´s data and so on