Sometimes it works, sometimes doesn’t. Have no idea why.
This flow doesn’t start when the condition with "RichTextInput value is … " is true. 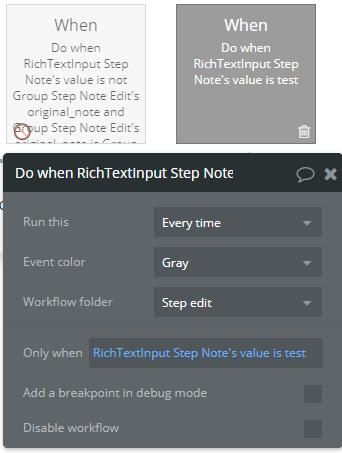 There’s enough going on here that it’s tough to give you help over the forum. Could you please file a bug report with more details, e.g. a link to your editor, so that our Success team can take a look?

General note - when debugging plugins, please also let us know the version you’re on (in this case, especially noteworthy whether you’re on our latest version released last Friday)

Sure, thanks. I’ll send a bug report. I just wasn’t sure how to report bugs for plugins. The same way as for the whole bubble.io?
It’s version 1.5.11.

Yes, since this is a Bubble-made plugin, the normal bug report process works here.

Thanks for the last updates! A couple of minor things:

I’m not able to reproduce 1 but do see 2 - I’ll note that one as a bug. Could you please file a bug report for #1 if you’re still seeing it?

And I still have one question. How to reset Rich Text Input without setting a focus to this element or to defocus input after the reset? I try to implement a Cancel button that returns the RichTextInput value to the initial status, however I don’t want to pass focus to the Input after that.

Hi… did you ever get a response to this issue (or figure out a workaround)? I am having the same challenge and need to get to the bottom of it. Thanks!

@ksaitow1 I reported the bug on Sep 12. @Bubble confirmed it on Sep 13 and forwarded to the engineering team to investigate. One of the engineers got in touch on Sep 14 with a quick update:

At present, BBCode and “recognize links and emails” (which I’ll call “linkification”) unfortunately don’t mix. This is because the linkification algorithm finds the URLs in the BBCode and inserts its own BBCode to make them clickable, thereby breaking the rendering of the original BBCode. I have filed a proposed solution to this, and may be able to spend some time on it this week.

You also noted that without linkification (just BBCode), the links in the BBCode aren’t identifiable as links because they have no different color or underline. I agree that this is frustrating. I’ll consult with the team as to the best way of allowing users like you to specify a color for links — it could be a field directly in the property editor, or somehow connected to our styling system.

We had a quick email exchange after that and I got the next update on Sep 22:

We made some progress last week on allowing both linkification and bbcode to be used together, but are doing some extra testing this week to make sure the changes don’t affect text layout before we ship them. We’ll let you know when we do.

Haven’t heard back from anyone since.

Thanks for the quick reply and the detail - very helpful. This certainly sounds promising (although I am not sure if the silence since 9/22 should be concerning).

I will keep an eye on the forum for any updates.

Happy with this plugin 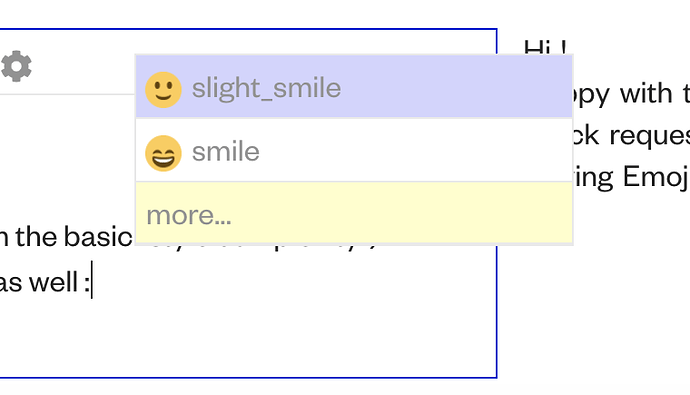 A lot of apps use Emoji’s and ease the use of them for users. It is missing

Loving the plugin so far and thank you for updating it so often with all the fixes :).

Just wondering if there is a way to set a font for the element to match the rest of the page ? 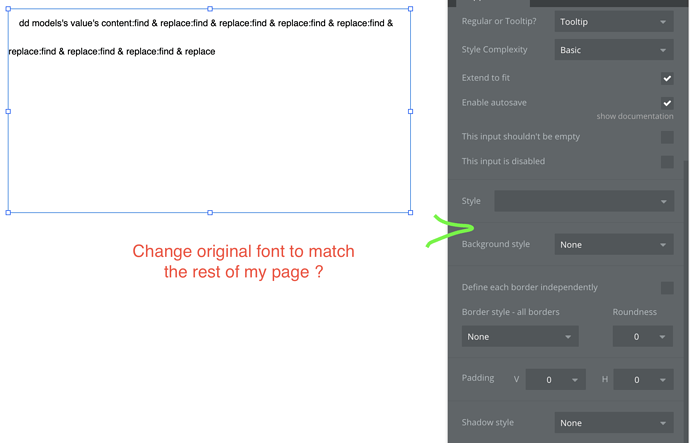 And an idea while I’m here: would it be possible to have “none” as style complexity" to hide the styling options / toolbar in some instances ?

I just got this error

will do. thank you

@allenyang Could we please get more granular control over what options are included in the Editor Toolbar?

I am thinking we could use checkboxes for all the options that we toggle on or off (Bold, Underline, Link, Image, etc) OR a ‘multi select’ dropdown type situation so that it doesn’t jam up the UI as much

I want to move off of the Legacy editor because it has it’s own issues, but I cannot get the same combination of ‘Toolbar Options’ in the toolbar so I know users of my app will either be upset there are far less options or upset that there are too many

(many of which my app won’t fully support).

I am wanting the same thing. I would think this would be a something that would prevent a lot of people from using this.

I know it makes it difficult for me to want to use because the style doesn’t match my app at all.

It seems like there is a lot lacking in the rich text editor input.

There are things not available that are available in other inputs:

This makes it unusable in any of my apps. I really want to use this, but every time I try to use it, there is a restriction that doesn’t allow me to.

Hi, I tried to put border colors whenever this richtext input is hovered or focused and it shows a recursion error once I try to run my site.

Here is the error:

Here is the richtext input’s conditions: 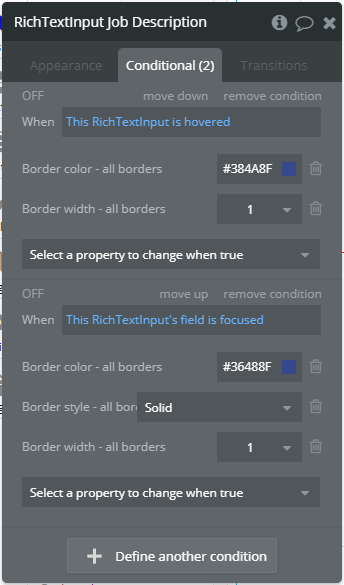