Pulling lists of Emails into Bubble

Has anyone had any luck allowing Users to import their Email lists into Bubble ?

I have got the Google Contacts API working … up to a point… but the data being returned is going to be very hard to parse sensibly.

So have switched to Mailchimp, but the existing plugins seem to be focused on a single Mailchimp account, rather than the User authenticating and using theirs.

Ideally I would pull in lists of emails, and then use Mailchimp to send - although the complication is that each email will have a unique reference, it can’t be bulk so will probably have to use Sendgrid or something.

Anyone done something similar ? 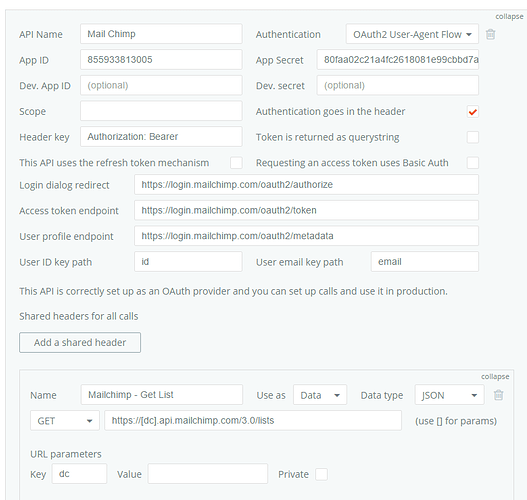 You need to do some jiggery-pokery with the data centre (dc) value that needs to go in the URL for the API calls. It comes back on the login, but I couldn’t get to it that way, so after the login I do a call to the metadata endpoint and store it on the user for use in subsequent calls.

You will probably need to set up a couple of Authorised Apps in Mailchimp for both Dev and Live.