I’m loading external API data into repeating groups, which sometimes make a few seconds to load.
For better UX, I would like to hide the group, or show a gif animation, while the repeating group data is loading.

I figured out that I can natively add a condition to my reapeating group : “when repeating group is loading yes/no”.
But it seems to have no effect at all. So what is the purpose of that feature ? 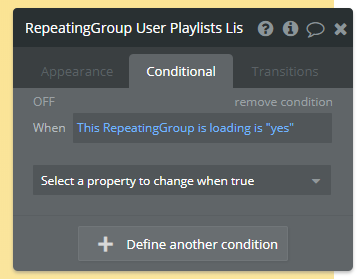 I found a similar question here, but no concrete answer : When Repeating Group is Loading

Thank you for your help!

I got an answer from bubble support : "If you have a large amount of data for the RG, the ‘is loading’ state might not work as expected because it is based on when the searches in the RG returns data and not necessarily when it is displayed on the page. "

Can i ask you what you did instead?

I am in the same situation. I am calling an API and showing the results in the RG, but the state ‘RG is loading’ always says no…

Thanks for your response. I am pretty surprised (well, not really) that Bubble don’t fix this behaviour, because it’s clear it doesn’t do what is expected…

You’re right but my message was nearly one year ago so you should probably ask to the support if they have something new about this ?

and still nothing fixed yet.

@andrew.mcdonagh Yep, no native solution yet, and I wouldn’t hold my breath for one either. This is less of a Bubble limitation and rather a common issue in web dev generally i.e. knowing when items have actually been “painted” in the browser (when a page is built with javascript, as is the case with Bubble). Bubble’s “is loading” state only returns true while it is fetching data from the database, and there can be a huge lag between the data being returned and the actual element being displayed on screen.

I’ve been working on a solution that may interest you

@robhblake , @miguel , @pierreantoine , I’ve managed to solve this for me.

In my case, I have a button that when clicked shows a parent group containing my repeating group and other UI components.

In the bottom workflow, I have it do the following:

This has significantly improved the UX, as the user sees the spinning GIF until the API calls have been completed and the Repeating Group has had it’s data set.