Something strange happened today. I deployed my app to live after making a single change to a certain element and then noticed that my whole landing page’s responsiveness is off. I have not touched anything on the landing page. As you can see from the photos all of it is off to the right.

I tried restoring the app to the version before the deployment and it looks fine there but it won’t let me deploy it to live as it requires a sync with live every time I revert to an older version.

I have checked the responsiveness settings and they are like they were before except now the container and element sizes appear bigger when compared to the previous version and I have no idea how to fix that. When I go to the UI builder all settings are exactly the same on both versions.

The issue appears only on the landing page.
The last image shows another page where everything is fine and it’s nice and centered on the whole screen.

Please help. Thanks in advance! 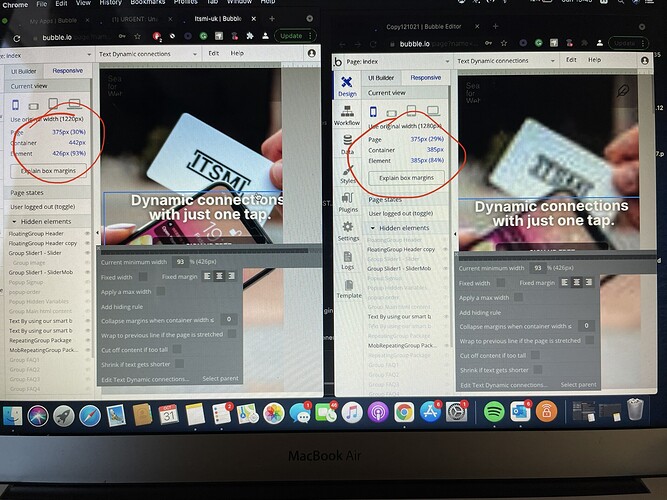 The original page width is different: 1220 px on the left, 1280px on the right.
It may be the cause of your issue.

Nice catch! How can I fix this?

In the builder tab, double-click outside of the page and check it’s width.

It worked! Thank you so much, you’re the best