It is part of paid subscription.

If you have done domain setup or not.

Just do for dev

So dev can be edited and without /version test?

without ‘/version-test’ in the dev url will be live site access.

I see, so without live version you expose source ‘nocode’?

Hi,
I’m Getting confusion, can you please elaborate your question. So that, i can explain you better. 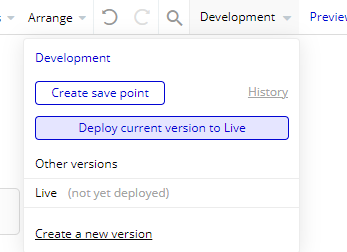 Well, after some tweaking now I have understood:
In Free Plan you have only one Development Version you work on.
In higher plans starting from Personal you have separate ‘Development’ version and ‘Production’ version, which is called for 2-year olds ‘Live’ )
Also you can have 2 development versions in Professional plan and up to 20 in Production (aha!) plan ) - that would be useful for some forking and experiments.