Which is better to use (in your actual experience) - Stripe or Braintree?

I’ll be adding a payments function soon, and I assumed I’d go with Braintree (by Paypal) since Paypal is way more widely known that Stripe, and personally i ALWAYS choose to pay with Paypal given the option.

BUT, I was just reading a thread on Reddit (r/startups) that was saying if you’re accepting international payments through Paypal, that you’ll actually end up paying around 10% in fees rather than the much lower fee advertised. (Seems like this wouldn’t apply to Braintree direct card payments and ApplePay etc, but if the customer uses the Paypal option, and i think most will, then it’ll apply right?)

r/startups - Advice - Do NOT use PayPal as a form of payment if your payments...

And also, it says on the Braintree website that for every chargeback that occurs, they’ll charge you £20. Which seems outrageous, since in my experience, fraudulent customers can make a chargeback request via Paypal at any time and pretty much will have it granted immediately (which happened to me multiple times in the past). Looks like Stripe charges £15 for the same, but perhaps that they’re more fair with dealing with the outcome?

So just wondering, if anyone here can confirm or deny which has the lowest fees for international payments … Braintree, and/or Stripe? And which is least suceptible to fraudulent chargebacks. Would be super useful knowing which is better to use.

[Note: in my case, i’d be selling non-refundable “credits” which can then be spent on uploads in the app, so no physical or digital delivery required, rather just an immediate update to the User’s “credits” field in my database. Hence no chargebacks should EVER be possible really. Also, I’m in UK (£) but assuming US ($) will be the biggest market]

I have stuck with Stripe due to Bubble’s plugin that allows for Connected Accounts. So in my main app I have a marketplace with buyers and sellers and it automatically takes my platforms fee from the transactions.

So because of my familiarity with them for this app, I stick with Stripe. But I am curious to hear other thoughts in comparison to Braintree for other apps I create.

On international fees,
I am in Canada, and I charge all customers in USD, as most customers are not in Canada and thus USD is much more common.
So when the customer goes to pay via Credit Card they will obviously have their own fee associated with paying in a different currency if the card is not US and has a conversion fee.

Then on my end, my Stripe account gets the USD amount where Stripe takes their fee (2.9% +something small), and then they deposit it in my CAD bank account 7 days later, I lose around 2-3% on the conversion rate. Not bad at small volume, but enough to consider a US bank account or to also hear what others think of other payment systems.

Anyone else have any further experience? Cheers

I am also looking for some feedbacks on Stripe, epecially since I saw many complaints about Stripe regarding fraudulent payments (just look at the comments on this post for example: https://www.merchantmaverick.com/reviews/stripe-review/).

But maybe it is more specific to selling physical products rather than a service ?
Any advice on how to reduce fraud ?

I have the feeling most people here are using Stripe but I’d like to learn more from People using Braintree.

I remember when I looked into this a while back that Braintree was cheaper to use than Stripe.

Did op finally decide on a platform?

For anyone using Braintree, I’m wondering if they’ve updated their payment window. It seems Stripe’s is a bit more robust; I like that Stripe handles this billing/shipping separate/same issue. However, I am having some difficulty with Stripe Checkout, and I’m wondering if Braintree is easier for things like passing along a shipping fee. Also, my client is setting up a paypal business account, so I’m thinking it might make more sense to use Braintree. 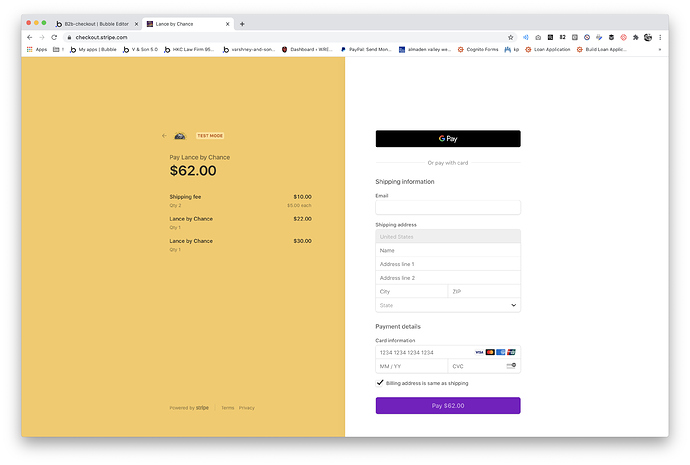 So much for “robustness.” After banging my head with Stripe Checkout (the line items, the shipping fees), I am taking a second shot at Braintree. I was able to get a prototype working a while ago simply using the Braintree plugin for Bubble, and now that I’ve tried getting Stripe working, Braintree seems much easier.