Look @bubble, this is getting ridiculous. There’s no reason for the client-side actions API to NOT support returning values. This is the EASIEST and NUMBER ONE most valuable feature you could add to Bubble. Do it. Do it now. You could add that in a couple of hours.

I’ve looked at the code and it’s trivial, but there’s no clever hack for this.

Just fix that already. Go ahead and make it “experimental”, but I am no longer going to build STUPID element plugins just to let users run actions that can then report a value (albeit in a roundabout manner). Just give us this and let us fix your broken platform for you.

Just for curiosity, can you share what part of the code you looked at?

In email communications I had with Bubble (where they asked for my opinion on how they can make the plugin builder better) this was the big #1 issue I brought up. So they are aware, let’s hope they take it into conisderation

Lots of it, but for example, here’s where we differentiate between client-side and server-side plugins: 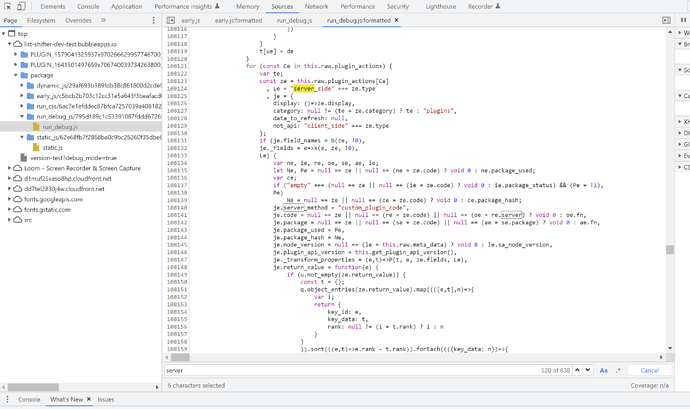 I had literally tried to trick Bubble into running (what it thinks is) backend code on the client side and return values as in SSA’s, but you can’t quite do that. But, if you controlled the source code, you could basically do that. This just isn’t a big change. (I don’t even care if the plugin builder supports it – just let us tweak the plugin in GitHub to do the return values trick.)

Also, in SSAs there’s a “return_value” part of params that is not present in client-side actions, but as you can see if you inspect the code, this is ignored in client side actions, even if you include it. So it’s not easy to trick into doing the SSA style return (in fact it’s impossible), but it wouldn’t be very hard to support.

Look @bubble, this is getting ridiculous. There’s no reason for the client-side actions API to NOT support returning values. This is the EASIEST and NUMBER ONE most valuable feature you could add to Bubble. Do it. Do it now. You could add that in a couple of hours.

The real question is why it was designed that way.

100+ bubble employees man… You’re asking a lot. Got to manage that workforce and do team building before improving the code.

I know, I’m super pushy and have unreasonable expectations about several dozen lines of code, @Future! It’s not like this has been desired since SSA’s were first announced YEARS ago or anything so I should totally can it.

Well, @redvivi, I think when the team was small the idea was that there should be a way to do little DOM manipulation things (and, it’s just before my time getting into Bubble, but I think perhaps the Actions API was the first plugin API followed by Elements) and that was the extent of the thinking.

But when SSAs eventually came on the scene the OBVIOUS excitement about those was not so much that they ran server-side (which is huge of course), but that they returned values. Woot! And it felt like obviously, client-side actions would soon adopt the same model. But they never have.

I literally don’t care if Bubble updates the plugin builder because adding a return_value to params.json is no big deal but after looking at the code it’s completely stupid that this isn’t enabled yet in the client side.