Merging Lists of Images from Custom States in a RG

I am using the Uppy Uploader by @jon2 to upload images to Projects in my app. It works great.

However, I want to create the ability to edit a Project.

To do that I have an Edit page where I post the Images list from that Project to a Repeating Group to see Images are already there. Then I use Uppy to upload new images and these get saved to the State of the Uppy element. If Save the Project, then these image URLs just get saved from the State to the Project.

However, before doing that I would like to show all the images in one Repeating Group so the user knows what will be in the Saved Project.

To do that I try to show both lists in my RG by merging the List from the State that already showed the images, plus the list of images from the Upply uploader. Both the individual State lists work fine (I have a seperate test RG to show that the uploaded Image can show), and when I save the Project the new photos get added fine. I just can’t get this one RG to show the merged lists of images.

Is there something special I should know about merging lists? Is that possible in a element state? 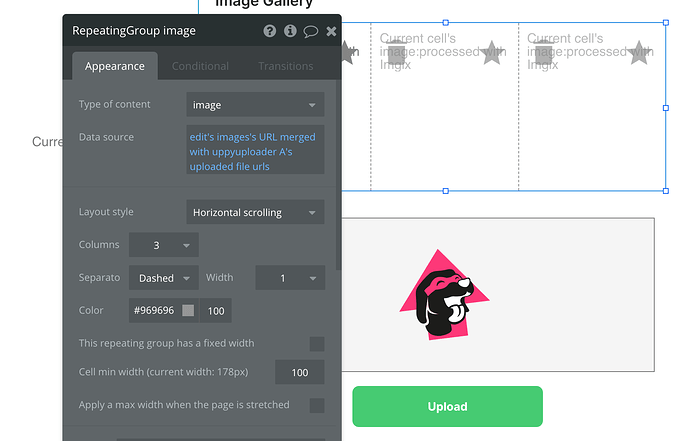