Need help with setting permissions for a button

Okay! I am quite the new one to Bubble, and I am trying to make it so only people with the rank Owner as yes or Admin as yes can ban users, as I don’t want moderators to be able to ban people, I just want people with the Owner and Admin to.

This is what I did to try to make it work but it seems it doesn’t.

In a nutshell if you didn’t understand my awful writing above, I basically just want people with either the Owner rank or Admin rank to be able to ban people. So basically anybody with IsOwner set to yes or IsAdmin set to yes.

Here is a photo of my work. 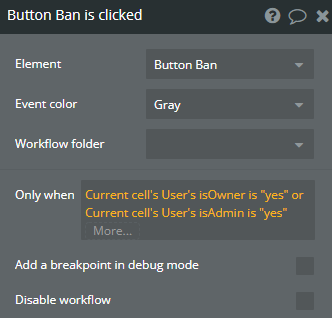 You probably want to change the conditionals to only when Current User's isOwner is "yes" rather than the current cell's user.

As it is, anyone will be able to ban users who are an Owner or an Admin.

But, as I understand, you want instead only Owners and Admins to be able to ban people (not the other way round).

And as @equibodyapp said, it might be better UX to put the conditional on the button itself rather than the workflow, so that the button isn’t clickable for Users who aren’t Admins or Owners, or perhaps even better, is not even visible for non admins or non owners.

Appreciate the help guys! I’ll try both of them out, in response to adamhholmes I don’t yet know how to make buttons non-visible to users who aren’t admins or owners if I did know I would definitely do that though!

Just make the button not visible on page load and add a conditional:

I’ll try this out, i’ll let you know how it goes, appreciate the help!