Selling one of my projects

I had this one particular project about a revolutionary todo-list that would help me achieve everything quicker in my life, but I don’t have enough time to follow up on it so I offer to sell it here to someone who could take it up to the next level.

It is a todo-list app that offers to split tasks into small subtasks, and subtasks into even smaller subtasks, until every listed task is a piece of cake to achieve. On top of that, every task comes with a percentage of how achieved it is (how many of its subtasks are checked) which shows to the user the progress he makes on his main big projects even when he just checks a subsubsubtask that was really easy to do.

This system helps fighting the writer’s block, makes organization automatic and crystal clear, and boost productivity as it is really rewarding to check 10 items in an hour and seeing an overall percentage rise.

I’ve been working on it intensely for a few weeks, had it tested several times during several development cycles and I have made a lot of updates with optimizations and enhancements in the user interface and experience.

Since then though, my work has become overwhelming and I don’t have the time to pursue this side project…

However, I would still love to see it take life, and I would personally use it a lot if it was taken upon by someone.

That is why I want to sell my idea and my app to someone who could make good use of it.

(I don’t know how usual it is to sell a bubble app, but I don’t want it to be left forgotten in my old apps, I truly think it has the potential to thrive)

Why might it be an amazing opportunity ? My primary aim when developping this app was to implement an innovative crowd-funding suggestion system I really like (don’t know if it already exists somewhere though). I created it so that the users could have exactly what they want while the app would be a continuous source of paid work for me. (More detail about the suggestion system in my whitepaper if you are interested, please ask)

I’m putting it here for a price of 1600$ because I’m convinced it is a promising idea (and ideas are the most difficult thing to have in my opinion) and it took several weeks of work, including a lot of testing and redesigning of the interface until it feels natural and ergonomic, as well as quite an amount of money in personal plan fees, in translation and UI redesign by a freelancer.

I could talk more about it for decades, if you are interested, or even just intrigued, please tell me here so I can contact you for further information and maybe put the app on Personal Plan again for a while so you can see it working.

Feel free to discuss the price, negotiate and ask me for more details about the application, I’m willing to give as much explanation as needed for you to take over the project if you are interested. Else you can just share your opinion on selling bubble apps and projects in general. I never saw anything like that here, is there a reason why ?

I think it is a well-started project that could have some success if handled carefully, you should not let such an opportunity go by.

Truly hope someone will see a chance in this and will give a future to the project.

In the midtime, have a good day, and thank you for reading this to the end! 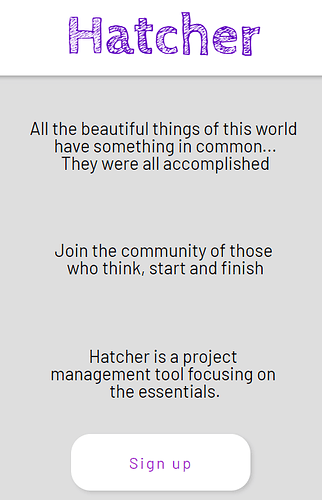 Is there a link to test this, how many users are on it right now and how did the figure of 1600 came about?

Hi !
Thank you for taking interest in this,
Currently I had to shut down the app because I don’t have time to work on it so I stopped paying the Personal Plan.
I have told my users I didn’t have time to keep working on it so I do not have any now (If it was already successful I would have sold the app at a higher price I think)
You can test it here : Hatcher
(I didn’t give the link because the app won’t be pretty on mobile because the Bubble banner gets over one of the main button when on free plan… You should test it on your computer, and if you are really interested I can put it on Personal Plan for a month so that you see it working properly)

As for the price, I calculated considering the following reasons :
If someone had that idea and wanted me to develop it as a freelancer I would have done it for about 3000$ or 4000$ (I mainly base my prices as a freelancer on those offered by Airdev). However, buying and idea that isn’t yours is a bit like buying a used computer, the price is at least divided in half, so I thought 1000$ for the software itself. On top of that, I must take into account the price of the Personal Plan I had to take to test the app in good condition and launch it so that I can make meaningful updates based on real users suggestions. I had it running for about 8 months, that represents about 250$, I paid a translator to have the texts in French and in English, about 100$ and a freelance designer to make a nicer design that the one I originally came up with, about 100$ as well.
All of this sums up to 1450$, however, this app also represent an infinite opportunity to earn money, even more if you live in America where paying for online services seems way more anchored in the culture than it is in France, and even in France I got several users ready to pay a bit for a functionnality they wanted to see.
I don’t have the time to exploit it, but I consider it is really good investment for any freelancer and I think it is worth way more than the 150$ I’ve added to the price.

Hope things are clearer, do not hesitate to go and see the explanation page here : Hatcher - What is it

Have a good day