Hello - looking for some help with an API/db question. I’ve tried and tried to figure this out; I’ve scoured the Forum and found related posts (below) but none had replies. I’ve Googled, YouTubed, NuCode, and more. Any input would be awesome.

I have an API for sports games that has nested values for the games. The data in the API updates two different ways:

Once a game is over, it’s gone from the API too

Here is a snapshot of the json 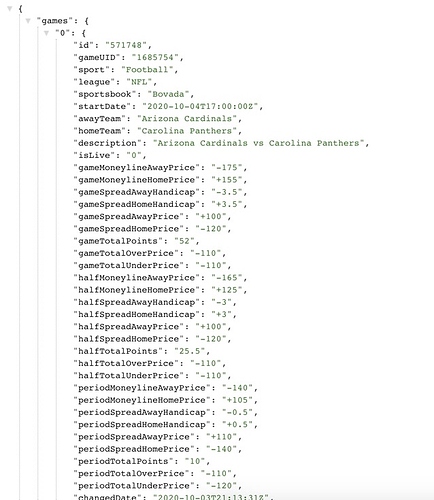 I can get the first run into the database for the games. When I run it again afterwards, it just makes duplicate entries. I need a way to run (several) times and have it look up the game by like the gameUID, and then just change certain fields, or something similar.

Any help/tips would be so appreciated.
JTF

I currently have an api workflow that takes the output of an api and writes a record to the bubble database for each symbol (key) that it finds… No problem… I want to run this same api periodically but instead of adding again the record that is already there, I want it to just update certain information for that symbol record… How do I do this? The api returns 200 “records/symbols” which can change… if it comes across the same symbol I want to just update some fields on that record; but if it co…