Is it possible to create a marker and possible an event when clicking the map?
I was thinking like click the map and create an event like concert in the park, garage sale and so on. Then have a popup show with category and so on.

You can certainly do it at the map centre with the existing Bubble Map.

I was thinking right click map and a popup would show auto populated with lng/lat and you can add a description to the event then create a marker for that spot.

I was wondering how this would be possible (using the standard bubble map)?
I can see in the workflows that actions are possible for existing markers but I do not see option to gather the geo address from a click on a map, without a marker already created…

I would like to be able to display from that map a list of markers (which can be easily done using the map) and also to add a new marker from a click on the map… . But I do not see a way to be able to have both of these features using the same standard bubble map… Am I wrong?

Thank you for your answer!
Thib

You can add a marker at the centre of the map. And then add some sort of “target” image in the middle.

With the standard map you can’t add a marker at a location you clicked on.

Thank you! I’m gonna find other ways so

Have a nice day!

I was having this same issue so I ended up using the mapBox plugin.
But its a paid plugin so I dont know if it will suit you.

In the event you wish to use the MapBox plugin

with this you can for example add a marker every time the map is clicked. But if the user drags the map or use the zoom buttons it does not initiate the add marker action.

Hi @robhblake - how do you add a pin to a LeafyMap? 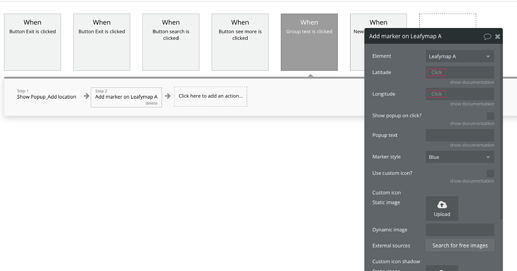 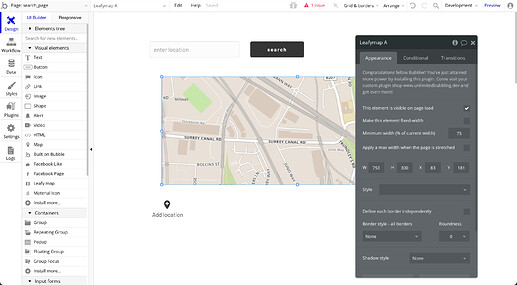 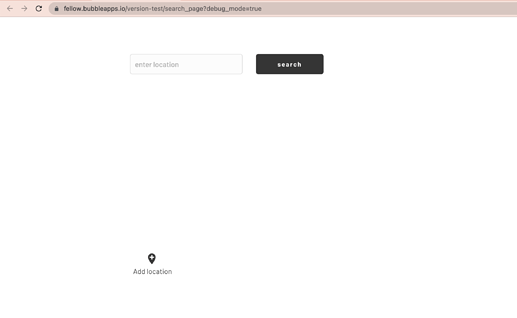