Coming to you all for some advice request regarding building out reports for my app.

TL;DR - complicated data structure that needs to summed up, running into “app too busy” errors.

Preface: I’m building a management tool for race teams. Starting out with a parts inventory.
The relevant Things are: Part, Part Movement, Part Category, Part Prices, and Applications.
Here’s a simplified diagram of the Things and their links: 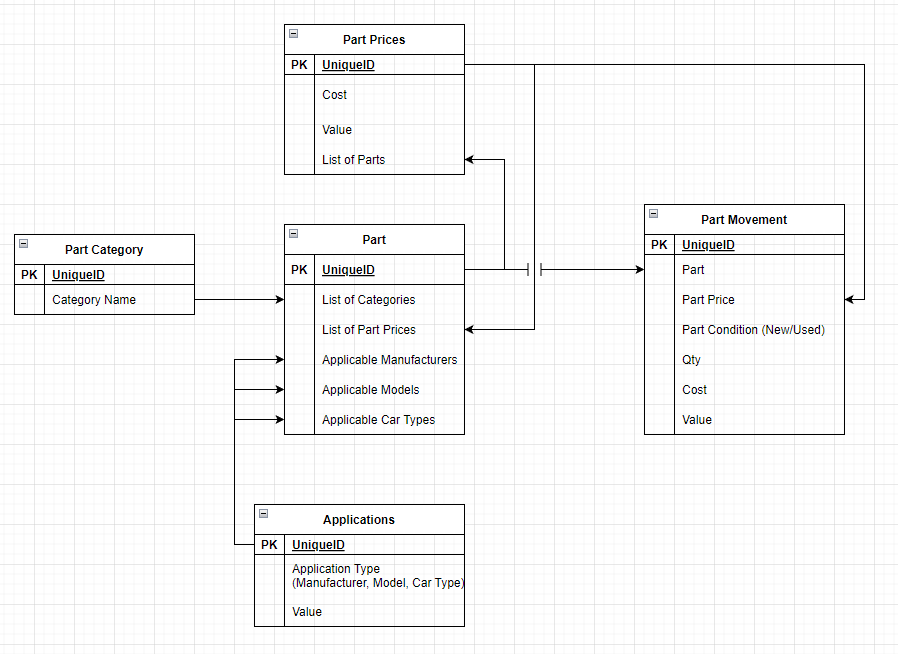 Any constructive criticism is most welcome about this setup!

Here’s the logic for the setup:

This is where we get to the reporting!
First, here’s a sample of a report:

We need to see a summary of the total cost and retail value of all parts.
Let’s keep in mind that we’ll need to filter the report as well (i.e. Generating a report that contains parts for only a specific vehicle).

For each part, we need to search for it’s Part Movements.

Drilling down further, for each Part Movement we need to calculate the following for new, used and total:

Now that we have the Cost and Retail for each Part Movement, we move back up to the Part level.

Step 2
For each Part, we need to sum the following for all of it’s Part Movements:

My main concern at this point is that I haven’t found a way to catch if the workflows below fail and deal with it accordingly.

My gut also tells me there’s a much better way to do this, but I can’t for the life of me figure it out.

I did test generating these values and some of the totals as each Thing is created or modified using backend triggers.
It seems these triggers are only somewhat reliable. It’s happened that triggers just didn’t run, and the report ended up being off since the “total” fields were blank. It seems safer to generate the values on request

If any of you have any advice, it would be much appreciated, and thank you for reading this whole novel! Hopefully this proves useful for others as well.

Here’s what I’ve done so far, doing hours of testing and failing.

I didn’t read anything you posted honestly after the first couple of lines, but I presume you may benefit from something I came across in my Stripe dashboard today.

When looking to ‘reports’ in Stripe they have a nice little loader with a message that says building larger reports may take a few minutes.

I’m just going out on a limb without reading all the details and say you may want to try to put up a loader screen before the report is ready.

Thanks! Stripe was definitely an inspiration for the Things setup, and I do have a loader but the issue is not the time it takes for the report to generate, it’s that the backend workflows either fails, or the page displays a browser error saying the page is unresponsive if I try to generate everything on the front end. It eventually does load if I click “wait for page”, but that’s very poor UX and can’t really tell users to just ignore browser errors like that, whether a loader screen is present or not

In the backend workflow, when I do with recursive, after the recursiveness is done, I make changes to ‘processor’ and flip from no to yes…then on the page the custom workflow will trigger and do what I want it to, which is usually change a view or navigate to an external site.

Maybe the concept could be applied to your issue.

Interesting, I’ve used a similar concept with flipping a “done” field that sounds like what you’re doing, I didn’t think of using that to check for failed workflows. I am using backend workflows currently, and moreso they’re split into 8 different ones to try and break up the process and avoid time outs.

Bubble doesn’t seem to provide an option to capture timeouts or app too busy errors, but I guess I could have a wf check if a particular report is not set to completed within 60 minutes to retry, or set that field to error instead so it can be dealt with by the user after the fact

I came across a potential bug while testing all this out and calling a PDF API through backend workflow - made a new post in the relevant topic here.

Any progress on your challenge?

From my own tests I noticed that Bubble is very, very slow when you have to deal with lots of data and computations and filtering with that data.

Using an external db means that 1-2 seconds time will be added to process the call in my case. Plus you can only do like 200 items at once.

So any experiences you encounter while solving this is most welcome!

Yea! What surprised me a bit was that I’m not even dealing with that many records. 4-500? It’s a good bit, but a far cry from the thousands or even millions of “things” some Bubble users seem to deal with.

The biggest thing slowing it down seems to be the advanced filters, which makes sense (having to download all records, 2-3k in this case) then filtering down. With my data structure (a lot of many to many relationships) I don’t think I had much choice.

I did run into a bug here that I struggled with for a while, which was related to deleting parameters from the back-end workflow (BEWF) without clearing them first (see my previous post).
With that fixed though (by recreating all the relevant workflows from scratch), I managed to reduce any single workflow to being far below the limit where it would time out, and it’s especially very snappy on the front-end.

Most importantly though, if I have to pass data to workflows, I only use unique IDs and then search for that Unique ID as granularly as possible This is what has made it the fastest on the front-end. If I try to use the entire “Part” rather than just a unique ID, the delay was going from a fraction of a second to 15-20. Dangerously close to a time-out. I also noticed that having a repeating group (set to 1px by 1px) was seemingly the fastest way to pull up all the records I need and reuse them.

That being said, the recursive nature of the workflows means the report generation is far from instantaneous, but we can deal with that by showing the user a % completion, or sending by email, etc.
To give you an idea, generating a full report, with 504 parts and 547 part movements, the total time to generate the report (504 workflows) was roughly 7 minutes:

image2350×124 15.1 KB
Not fast, but within reason I think given the data structure.
I’m sure that if I could have a “flatter” data structure, this could be improved significantly!

Ready for a long read? Here’s my workflows:

I’m putting all that there in case it helps anyone else, or if some of the brilliant minds around here have any suggestions to make this better or faster. I wouldn’t consider myself an expert by any means, just stubborn enough to spend far too long making things work! I’m sure there’s better approaches though that I haven’t though of or know enough to be aware of.

@aiancu very interesting. Thanks for sharing!

I was wondering, why do you not use custome states? Perhaps it is quicker.