I am using the API connector to pass data from Bubble to Airtable. I have used the “find & replace” function within each field to ensure that non-JSON characters are escaped (included is an image of the setup - 1). 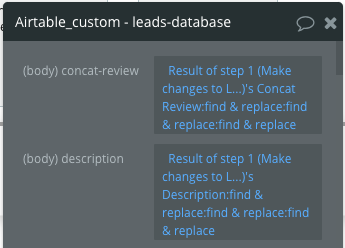 However, when the value to be passed is empty, Bubble ends up sending “null” which causes a problem at the Airtable end (included a screenshot of that - 2). How can I make Bubble pass empty when it is empty, instead of “null”?

I’ve checked the forum and I see that others are facing this problem too and there’s no answer on the thread: Empty dynamic value as null?.

This is the final hurdle I need to solve to launch my app. Please help me with this!

You could use a JSON body instead of parameters, and do a {}

Thanks Nigel - I am not sure I understand that entirely. Even now it is a JSON body, just with the parameters to allow me to pass the value dynamically, isn’t it?

I have shared how I’ve defined one such parameter below. Would you mind telling me how I could rather send it across in the method you are suggesting?

Also, I assume that I’ll still be able to send the value of these fields through the workflows. But if the approach changes on that front please let me know.

Sorry to trouble, but would really love your guidance here. I would be able to wrap this app up over the weekend if you can push me in the right direction

Will have a look today for you.

I suppose the obvious question is why you aren’t using the Bubble Airtable Plugin?

However, maybe put the whole field (including JSON) in a parameter.

Then set it to blank if your field is empty ? 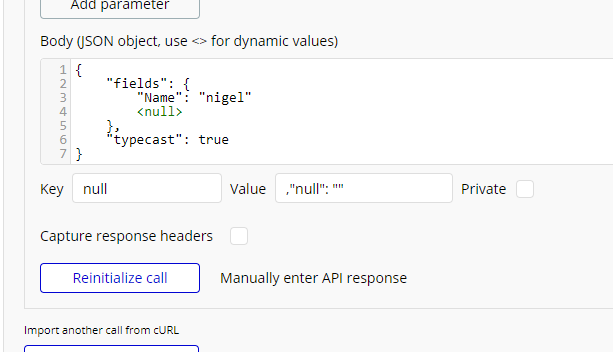 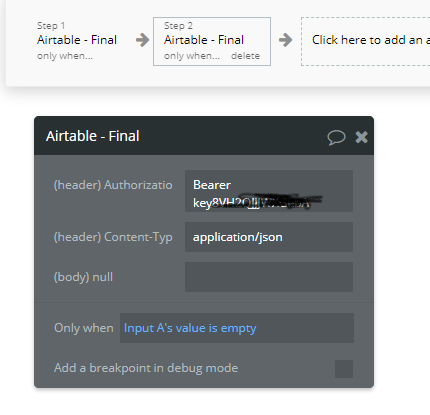 Seems to work. Should be fixed on the Bubble end of course.

Sorry for the late reply, Nigel and a big thanks for the details!

I am not using the Bubble - Airtable plugin because I found it a bit tough to decrypt. The very first “RecordID” field just continuously kept giving me a data mismatch error. I actually have a column in my Bubble db with the exact Airtable record id - so that stumped me a bit.

So, that exploration ended before I could get about digging a bit. Let me know if you think that this was a bad decision.

Instead, now I have wrapped the text in quotes in the workflow itself (instead of the api connector page). Now it passing an empty string instead of a “null”.

So, this change solved it for me.

Thanks for this truly straightforward solution!