When holding the ‘shift’ key and then arrowing up, down, left right - it will by default nudge that element by 5px per shift. It would be nice to be able to set a custom pixel shift that could be defined in the ‘Grid & borders’ menu. I find using this feature is super handy for pixel perfect alignments.

So for instance if you are working with 20px grids, you could set the nudge shifting to 20px or if you are working with 8px grids, set the shift to 8px. Alternatively there could be a setting that you can check that is nudge shifting inline with grid, so if the grid is enabled and is say 20px, it would snap and nudge shift with the grid (so jump to the nearest grid in the direction of the shift, then shift to the next grid row). 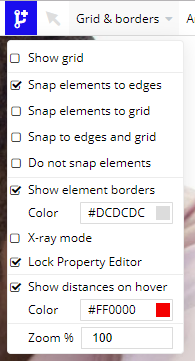 If you select an element (or multiple) and move it using the arrow keys, while holding shift, it will move much faster! Edit: After searching the forum, I see that this has already been brought up multiple times!