Empty default yes/no state is read as "no" 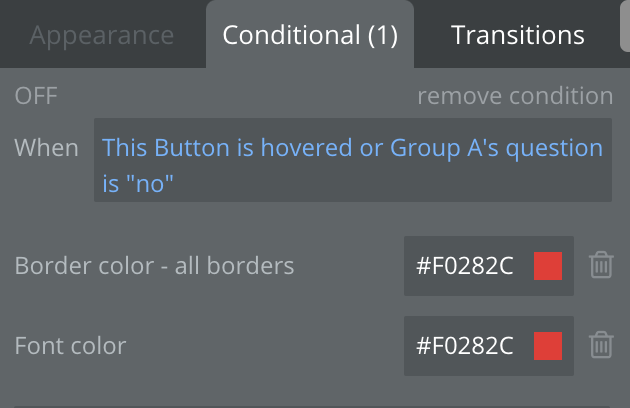 yet on the page load:

This is not a bug. An empty (null or undefined is the technical term) yes/no value evaluates to no.

This is also the same with programming languages such as JavaScript. A value that is null or undefined is equal to false or “no”

@keith has a great video to help clear up some confusion around Boolean values, if you’re interested.

Video: Working with Booleans (yes/no values) in Bubble - Are YOU Cool with Boole? Tips

I see a lot of confusion related to our good friend (and one of the most simple, but powerful datatypes) the “yes/no” data type. I made this video that covers many topics including the various UI elements for interacting with Booleans – including how to make custom checkboxes (it’s easier than you think) – and the Bubble way to negate (invert) a Boolean. Find it here: https://vimeo.com/289546292 The thread that inspired me to do this is here. While I didn’t fully understand the original quest…

To expand on @tim12333’s almost entirely correct answer (and thanks for the shout-out):

The boolean (“yes/no”) datatype in Bubble is the JavaScript boolean datatype. They are identical.

(In JS. we can ask, “are two things equal?” In a couple of different ways — loosely or strictly. In loose equivalence, we are checking if the VALUE of two things is “the same”, regardless of data type [for this to be possible we must make some assumptions about what “equivalence” means — as one example, in loose equivalence, the string “2” is assumed to be equivalent to the number 2, and so the expression “2” == 2 evaluates to true]. In strict equivalence, we are checking if both the VALUE and the TYPE of two things is the same. Continuing our example, asking “2” === 2 (the triple equal sign is the strict equivalence operator) evaluates to false, because “2” is of type string and 2 is of type number.)

Now, what about when one of our arguments is of boolean type, but the other is of some other datatype? Obviously, in strict equivalence, the values are never the same.

(When JS automatically converts a value to some other type, we call this “type coercion”.)

We might say (and, in fact, we do say) that non-boolean JavaScript values are either “falsey” or “truthy”. They are not strictly true or false, but they loosely evaluate to one or the other.

FUN FACT: There are only 7 falsey values in JavaScript! WHOA!

So here are the things that are falsey in JavaScript (meaning that, in a loose boolean comparison context, they resolve to false):

And that’s it! Those are the only things in JS that loosely evaluate to false. Everything else is true.

But while JavaScript variables can change TYPES depending upon their value, Bubble variables (by which we mean fields on a Thing, custom states, the value of expressions in expression builder fields, or the exposed states of an element or action) do not dynamically change type, but CAN hold a special value – “empty” – that is not of that specific type.

That is: empty is essentially the same thing as JavaScript’s null, but a field of any datatype can hold empty, even though empty is not, itself, of that datatype.

So, in Bubble, the value of a Thing’s field or some expression (particularly “Do a Search for… :some_item”) can resolve to empty.

(But it should be noted that nothing in Bubble is ever undefined. There’s no such thing in point-and-click languages as, to be able to select something, it must have previously been defined. So, while custom code in plugins might trigger a JavaScript error by referring to some undefined thing, there’s actually no similar problems that can befall the Bubble programmer – nothing is ever undefined. The closest we can come to that is a deleted datatype or field, but the Issue Checker immediately alerts us to this, noting that there’s a reference to a thing that used to exist, but no longer does.)

Now, because Bubble is strongly typed, we don’t have automatic type coercion. And so, any boolean expression, must actually be composed of booleans (that is, all arguments must themselves be boolean [“yes/no”] values). So, unlike JavaScript, we can’t write an expression like:

We must instead write:

I write all of the above as some have noted that – in my own plugins (like List Shifter, Calendar Grid Pro, etc.) – my yes/no outputs don’t usually output an explicit “no”, but generally go to “empty”. That’s by design on my side. In Bubble, that empty value is logically equivalent to “no” so I don’t waste cycles converting empty outputs to “no” as it doesn’t cause any problems. (Except for one: If you attempt to write out the value of such a field in a text element, it will appear as ‘’ (an empty string) rather than the string “no”. But personally, I find this useful for reasons I won’t belabor here, but may talk about in a future video.

Thanks @keith for the explanation. That clears up my issues as now I understand why I never saw a ‘no’ value and it was always empty. Plus utilizing the yes/no values for conditionals or workflows is cleared up with the idea that they must first turn from no to yes before getting recognized as a no value.

Thank you so much @keith! You are truly a legend!!!