Thats right!, Take Bubbles dynamic programing ability, Google's Most functional service and Your next Communication Reliant App then see where creativity leads you.

As a reliable SSO Provider Google allows you the scope to even go as far as create your own Gmail app for your app users, Allow your users to Get, Create, Alter, Programmatically Search, Delete their mailbox labels, drafts, message threads, messages, message parts, attachments and View settings, Vocational responders, email forwards and history. Watch/Stop the Gmail Push Notification Service, and much more.

The sending ability is not just like Bubbles, How does sending HTML email’s sound? or attachments? we are pushing this integration to some pretty cool limits and the functions provided only get better with Enterprise,

All you need to use the Enterprise Edition is a Gsuite Account, Enterprise gives you the ability not go further than just lookup email forwards, responders, batch’s, Alias’s, Signatures and mail routing systems but even make use of the SendAs methods. This truly is the only email solution you will ever need.

Of coarse your everyday Gmail account holders can use the small business version and the quotas from Gmail are really more than enough for most being 1,000,000,000 quota units per day!! FOR FREE!!

The most taxing action is to send an email at 100 quota units. Rate limiting is 250 quota units per user, per second but this is a moving average so it will allow for small bursts.

Here is a one hour muck around testing -

I wonder if there is a special case element that we could add to this feature packed integration??

As always, should you require a custom build, a number of other scopes or support in any way please feel free to get in touch, We will publish some documentation on this integration shortly that will also cover the general process of gaining the permissions and required settings for your integration.

Thank you a lot for you effort ! when will the plugin be available ?

Are you building a plugin for Gmail? Is this what this is about and will it support repeating groups in email? That would fill a big Bubble gap in my opinion.

Amazing stuff. We use o365 bit I’ll look into Google.

So, I have put in some massive come on Gmail why wont you do as I ask time… the result…

Will give You this: 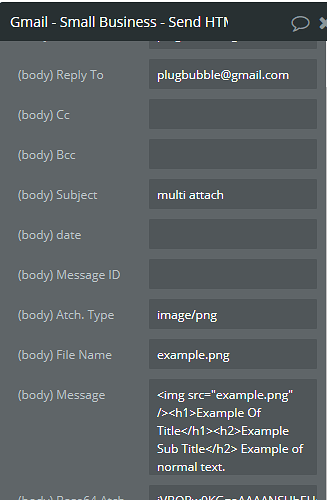 Will give you THIS: 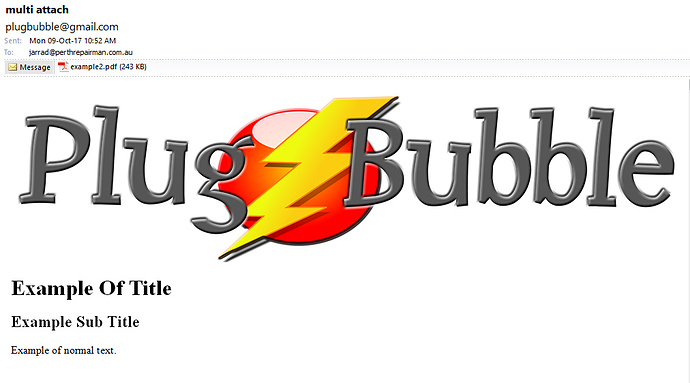 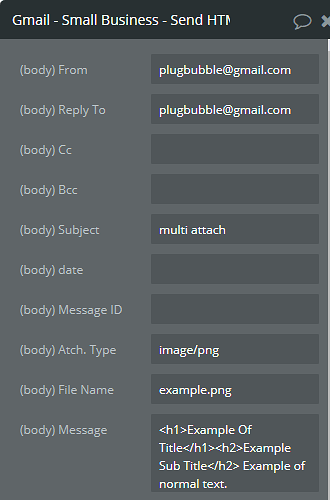 will give you THIS:

As you can see this allows you to attach an item but also embed those attachments into the email also.

Are we a bit more excited? Release is imminent, just crossing I’s and dotting T’s as they say.

@jarrad any thought on the questions posted?

The Gmail API can do almost anything and what its seems your trying to achieve is a possibility, not in the sense that all your questions would be exactly how it would work but the result possible in other ways. There are a few problems though when it comes to keeping this plugin usable for the bubble majority. The first thing to consider is scope, for many users they want to allow a user to get/send emails and other general gmail capier and so adding say this scope https://www.googleapis.com/auth/gmail.settings.sharing will mean a user being asked for a simple read/create/send/delete scope and expecting this common scope will bail on you app in a heartbeat when they get greated with something like this, 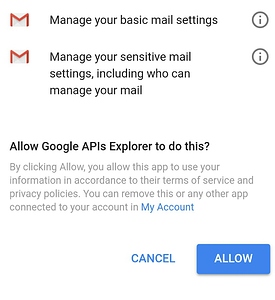 to allow a bubble app to automate a S/MIME but this could actually allow you to have a single service account automate a process where a user can provide their pkcs12 for each of their gmail accounts and your service account can create a S/MIME config, a new alias within your apps gsuite and there you have now the start of an encrypted chat network that users become part of, allowing your service account to do the cert swapping and list of friends means an app like signal is not that difficult and better still the heavy lifting, bulk of the storage and auth is with one of the worlds most trusted/commonly used/secure/high-uptime/low-latency/free services leaving your apps resources less streched and more responsive. Now take that concept add the scopes for modifying your apps domain, you can then even provide the method and intergrate a companies entire domian via a transfer/new sale and now your one little service account can be scoped to create a service account assigned to the users domain name but is now technically your apps service account that you can then leverage to create the whole white labled process and can programmatically create whole encrypted signal like apps over and over one by one collecting a fee for the platform per user, a domain renewal and possible sale, you can sell each extra account a user was for a price way below googles gsuite account because they are actually alias… each actual account in that domain yeilds the ability to create 30 alias accounts… then just when this post has gone way to far, you scope the service account to have imap, pop, smtp, vocational and autoForwarding settings and provide automated services via sent/received emails, send through your own customized SMTP servers, and probably then look at the bubble plugins and square one will be forever know as your browser.
So i guess somewhere in that im making the point that if you want to really push and pull the best of any google services in ways they havent really been used for before we are better off making your your version before adding to this one. One other quick note, the issues surrounding scopes, auth, offline, REAL OFFLINE and get, revoke or rescope refresh or access tokens for google services i have managed to wrap in a single plugin but it would be pretty irresponsible to publish it before server side actions are here, its a scary little weapon and with bubble being so good at being able to bubble stuff this could get pretty abused even being made up of more client-side libs than not.

Is there a way to use the signature from a gmail account so when a email is sent from Bubble/gmail pugin it has signature attached? Or can you create a signature directly within bubble/gmail plugin?

I would just make signatures and have them stored in bubble, referencing them at the end of the emails body in the workflow action.

Hey Jarrad, is this plugin available to use now?

Hey Nat,
we have partnered up with Jarrad and all his plugins were transferred under Zeroqode as it was announced here: Zeroqode partners up with Jarrad for building great plugins!

@jarrad or @levon
Liking the plugin so far, but for the Send Email action (plain text), I keep getting this error when the CC or BCC fields (parameters) are empty:

I couldn’t find any documentation so asking here, is there a specific way to pass a null variable for CC and BCC fields?

can this plugin allow users to purchase a google domain - and create an email account after logging in?

@andrew6 Andrew, this isn’t possible with this plugin

@gf_wolfer Geoff
Jarrad has added separate calls to be used without cc, with cc, and with bcc, and also a new call “send fast email” - please install the latest plugin version and give it another try
thanks!

Thanks for the quick response.

Is the token being refreshed automatically? An account that was connected yesterday is saying their was invalid authentication.

it’s supposed to, i have modified something in the plugin, please install the latest version and check again if the token expires

The Send action is working now (email gets sent), but this error is popping up even though it works?

i have reinitiated some calls but if you see it again, please let me know which particular call you are experiencing it with.
Thanks!