How to display user rank on profile page?

So I have a user field called “XP” and it’s a number field. Basically as the user engages various ways on my site, their XP number goes higher and higher.

I know to make a leaderboard page ranking a user is as simple as creating an RG and sorting it by the “XP” value, but what if I want to display the users rank on their profile page?

I would imagine it’s as simple as running some type of equation/comparison where Bubble is looking at the # of users that have a higher “XP” value and returning that number. (I suppose you could add a +1 to the equation since hypothetically the top user would have 0 users above them so it would display a 0 instead of a 1)

Regardless, I can’t figure out how to do this on a basic text field. Here is my best shot with no luck. What am I missing here? 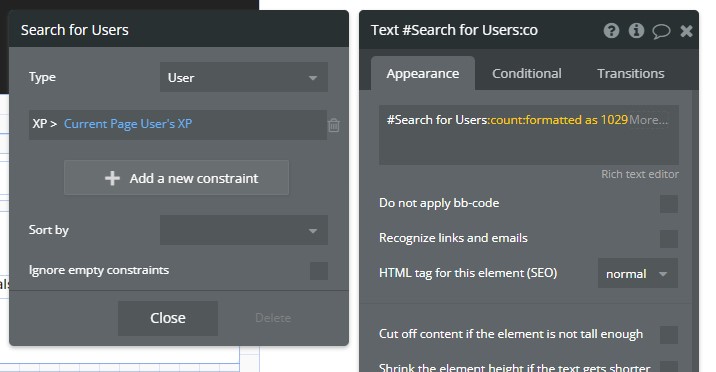 Hi there, @brandon8… it seems (to me, at least) that what you are showing should work. I just created a quick example (although, I used Current User instead of Current Page User in the constraint), and it worked as expected. One thought does come to mind… any chance you have a privacy rule on the User data type that is stopping the users from being found in searches?

Wow! Good call. You were right. That data was being blocked via the Privacy settings. I would have never figured that out. Thank you sir!