Very excited to announce the release of a highly requested feature - the ability to create a “tag like” list in Bubble (see image below).

To build something like this, we’re introducing a new “Scroll direction” in Repeating Groups called “Wrapped horizontally.” This setting allows the repeating group to act like a row container in that instead of scrolling, the items in the list will wrap to a new row if the number of items in the list is greater than the parent container will allow. This also means that columns do not need to be the same width and will fit width to content by default.

Note: Switching between scroll directions after designing your repeating group cells will not always transition gracefully.

Look forward to seeing what you all build with this feature!

Sometimes we get used to a handicap so much that we would either have made design changes to avoid encountering that or would have workarounds to counter it. So much that now when that handicap is being removed, we would run clueless for some time as to how to use this new capability!

I need to orient my thinking now that this is indeed possible in Bubble and I don’t need to change my designs for this restriction!

Hope I am successful soon.

@mghatiya best of luck with this tough transition!

@nickc This already solves many problems. If the repeating groups are formed in the next step like the images on Pinterest, it would be perfect.

Yes <3 I’ve been waiting for this. nice!

POV: that feeling when you were worrying about why Bubble doesn’t support it, so you built it out using HTML and JS three or four days ago

Amazing. I feel that my dream has finally come true.

Any chance that this enables you to go the final step and allow native repeating group heights fit to content within columns? Like below: 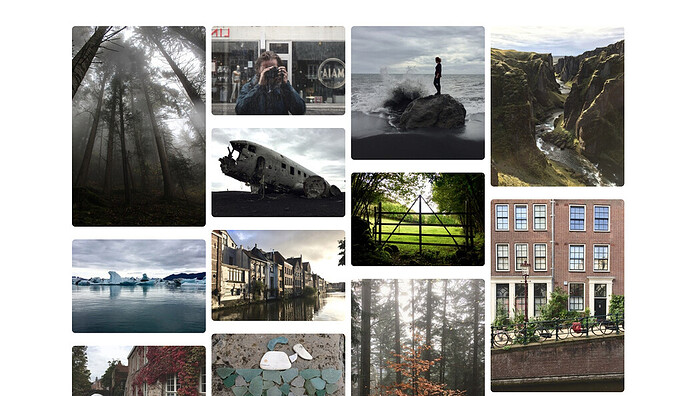 a pinterest like grid used to be doable with html code or a zeroqode plugin (pinterest like grid) however, now bubble clearly loads data differently on page load than half a year ago and these methods cause a nearly unusable lag to achieve the effect shown above.

What would be cool is if they made some kind of algorithm that would “reorder” them it fits better if it’s within X amount of cells of it’s original location. So one tall picture could be next to 3 short pictures

AMAZING! Can get rid of HTML and JS workarounds!

@nickc this one should be next

Thank you for this amazing feature!

I have been playing around with it and i have a doubt, how can we get a centered layout for all tags? Something like the below photo, i am not able to find a solution:

Amazing! Time to get rid of all sorts of workarounds with custom css and html to get this effect working.

Have you tried to set the center alignment on the parent container?

Wow they’ve done marvelous!!.
I’ve been having to use code for this. It’s time we did it locally.