I’m relatively new with Bubble, and I’m not sure if I’m using the correct terms when explaining what I’m trying to solve.

I found this old thread that was really close to a solution, but I didn’t fully understand how to implement it.

I’ve created an illustration that may communicate my situation probably better than I can describe the problem and workflow needs. See image below.

Problem to Solve:
Trying to find a way that allows a list to be dynamic (add and delete records) and then displays the count of records within a dropdown menu. This dropdown menu reflects the Sorting Order for the category list items. The lower the number a category is assigned from the dropdown menu the higher the descending position. Using this dropdown menu, the user can change the category vertical position instantly.

When ONE dropdown changes ALL the other dropdowns will adjust their list accordingly. The dropdown list is based on the number of categories in total at that time (added or deleted) the user has created, so the Sort Order List (represented by the Dropdown Menu) will need be dynamic. N0 more than 8 categories in total will be listed, pending how may the user create (8 is the limit).

IF you see a better way to sort the dynamic choices for the user then previous described or communicated in the illustration while still including the needs I’m trying to describe I’m open to your advice : )

I appreciate any help you can provide. Thanks!

Luckily RGs are dynamic - in the sense that they will update themselves in realtime in response to a change in their DB values.

So, I would suggest creating a field under the type of things in the RG called ‘position’. Once you have this, you can set the RG’s data as ‘your list of things: sorted by position’.

Now in your dropdown, we’ll have to assign a list of numbers that ends with the number of items in the RG. If this is dynamic, you can use the Toolbox Plugin’s List of Numbers functionality.
Once you install the Toolbox Plugin, you’ll see a ‘List of Numbers’ element under your available elements on the left panel. Add one of those into the RG, so that each item in the RG has one. Then set it up to have a list of numbers starting from 1 and ending at ‘Repeating Group X’s list of things: count’ 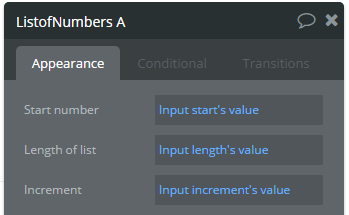 Your help is greatly appreciated! Seems relatively straight forward, however, after reading through you explanation dissecting the information, I still require a little more help. You see, my skills with the Property Editor are not that strong yet and making the proper data connections is where I’m having trouble.

Once I can connect things correctly, I’m sure the Workflows will fall into place.

If you could let me know the missing details to the Property Editor I’m missing I would appreciate it. Please review images. 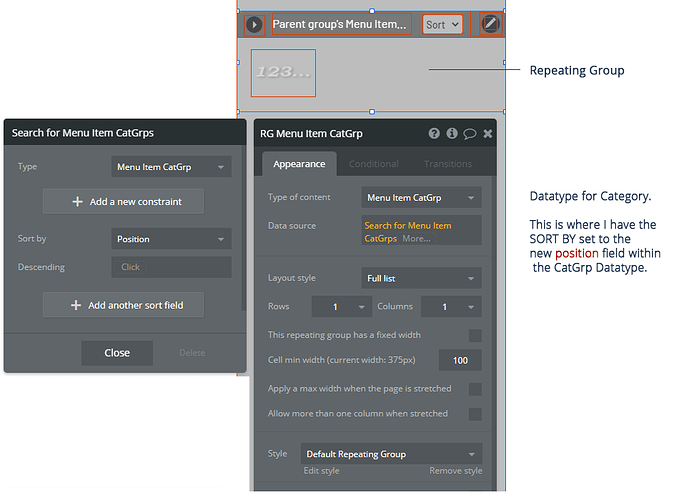 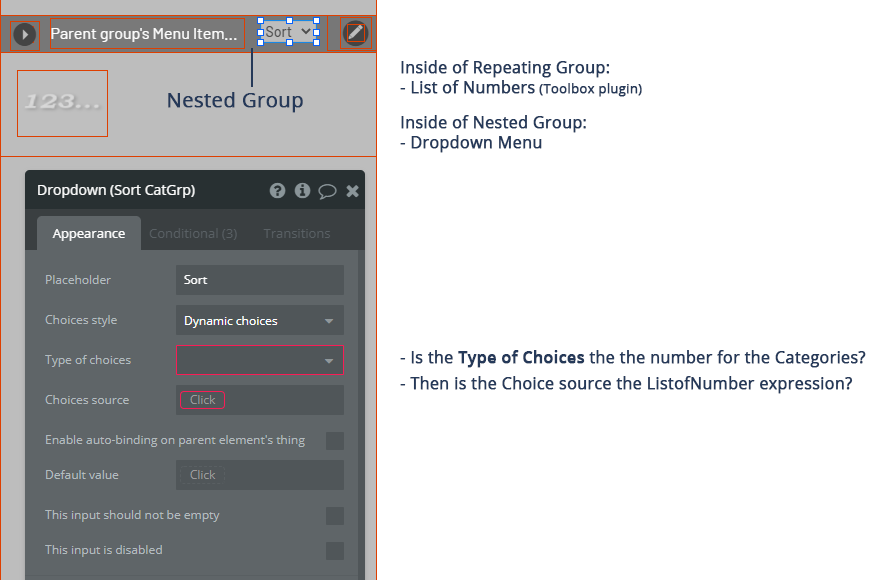 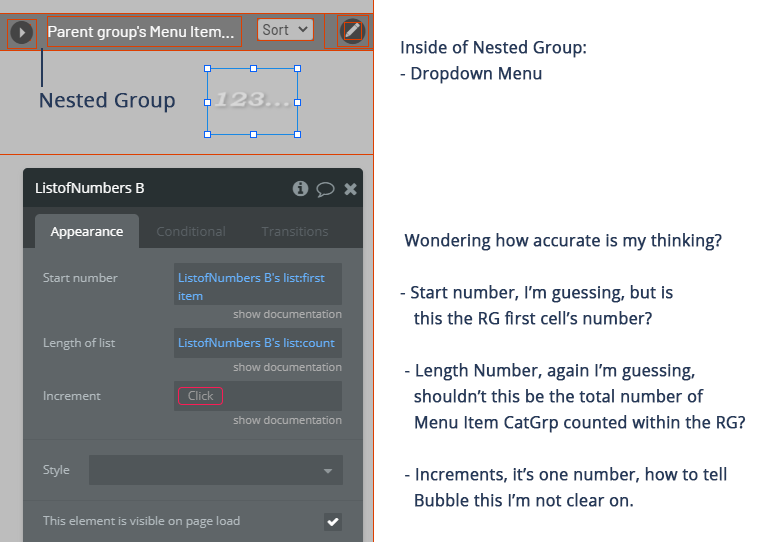 Within CatGrp Data Type, the ‘position’ field should be of type ‘number’ (not a list). This is because we want to associate a single position value with each entry of this data type.

Once you’re here, you can set up the workflows that trigger ‘when an input is changed’ as I mentioned in my first answer.

Let me know how it goes!
Ranjit

Thanks for your time and reply. I followed all your notes to each section (ListOfNumbers, Dropdown, Repeating Group). Unfortunately, it’s not working yet - review Property Editor and Workflows screen captures below.

Any feedback you can provide is greatly appreciated. Thanks - Jon 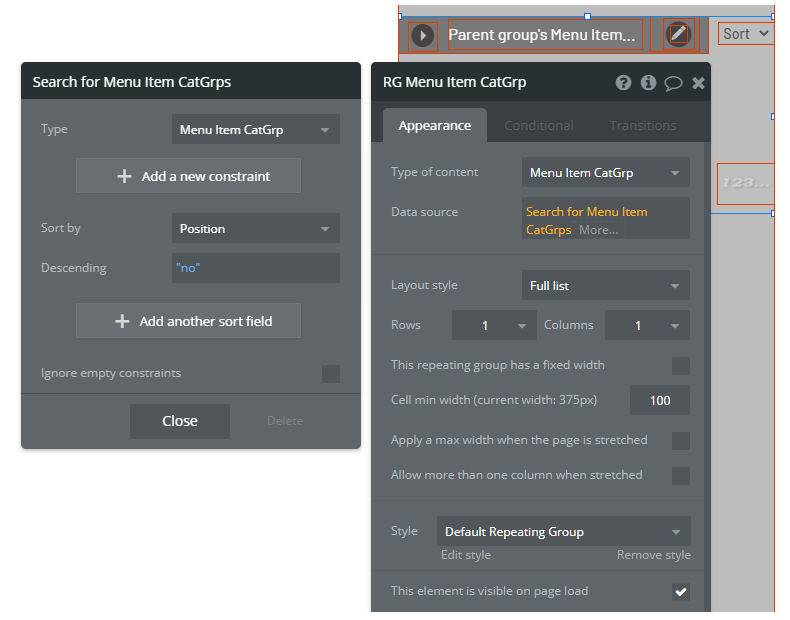 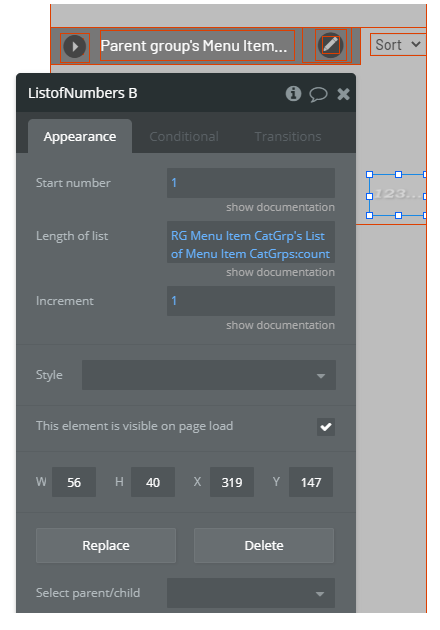 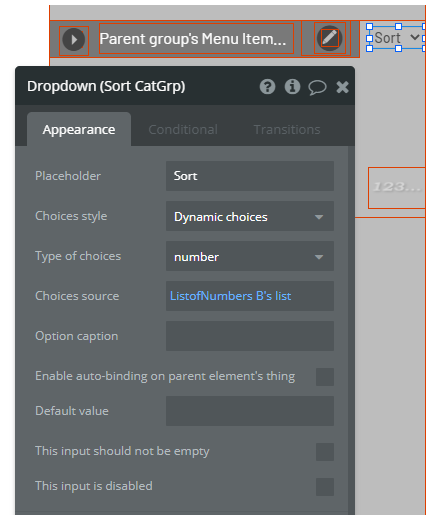