Any Ideas why the Element is getting pushed down?

I have two elements next to each other. One element is a group, the other is a repeating group. When I placed both at the same Y value they were not aligning at the top of the elements for some reason.

I adjusted the repeating group to be higher than the group to it’s left in order to accommodate for the issue, however, it is only an issue in preview…when in the UI editor and Responsive Editor they look off when set differently, but look aligned properly when set at the same Y value (the obvious expected result). The problem was on preview. 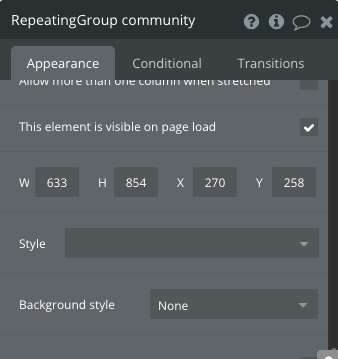 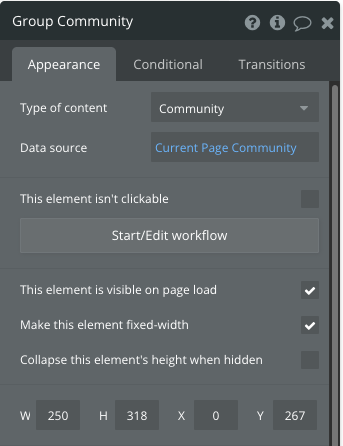 There are no elements on the right side of the page above the repeating group that are not above the left side group element.

As a side note, so maybe an explanation, I’ve been encountering a slew of buggy behavior during the past four hours.

Thanks for the post and sorry for the trouble with this. Without getting our hands on it, it can be hard to pinpoint a particular cause. But, have you tried using the Debugger and clicking ‘Show Responsive boxes?’ It might help explain what’s going on here, and would be my first attempt in tracking down what’s up.

If you continue to see unexplained behaviors, don’t hesitate to submit a bug report though and we’d be happy to take a closer look. Or, you can always email us directly at [email protected]

But, have you tried using the Debugger and clicking ‘Show Responsive boxes?’

I have not. I never knew it existed. I just opened an app in preview mode and clicked on the Debugger but I don’t see a “Show Responsive boxes” option anywhere. I tried finding it after using the inspect button and selecting an element but didn’t find it in there.

Where would that be normally? And would I need to click directly on the element that is responding strangely?

Ah, I should have shared where it is. You can find it as a small line of grey text under the Inspect button when you have the debugger open.

You shouldn’t have to select an individual element for the feature to show responsive boxes in general, but I believe clicking some of elements might provide further explanation as to why it’s behaving a particular way from a responsive standpoint.

You can find it as a small line of grey text

Thanks for pointing that out to me…I honestly never in a million years would have found that on my own.

I would like to recommend that the small grey text be changed into a button that is more recognizable and visible. With it being such small and light grey text it is hard to see in general, and being placed directly underneath a button (inspect button) it makes it even less noticeable.

Glad to know this exists now…will definitely come in handy in the future.

This is the first time I’ve heard about Show Responsive Boxes. I tried it and it doesn’t help much. When I’m working on responsive I switch background style of all elements to Flat Color. That’s super helpful to differentiate what you’re looking at. If you guys could implement that in your actual Show Responsive Boxes, it’d save a lot of development time. How can I suggest this feature officially?

style of all elements to Flat Color. That’s super helpful to differentiate what you’re looking at

Yes, I do this as well…it is the only way to really see what is going on with different containers. Definitely would be a good implementation.

How can I suggest this feature officially?

Yah I guess it sucks. No filter no search. I wonder if I can create a page using Bubble API to build a better ideaboard?