Long story short - this post isn’t really a tip per say, just a general observation with some un answered questions. Please let me know if anyone has any advice in this area?

This post is in answer to a recent test run and discovering the impact of load time a Bubble site has with fonts - post here:

How can bubble be so slow? Question

I’ll need to do some speed tests between using the integrated Google Fonts API and using custom fonts, loaded over Cloudfront via this technique - but it might be a quicker way round (the latter technique). https://forum.bubble.io/t/bubble-best-practices-how-to-make-your-app-run-fast-by-airdev/51317/10 I’ll do a couple of tests over the weekend if I get time and report back with findings. 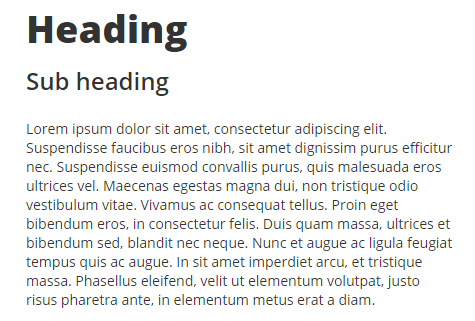 So when using the custom fonts, I have opted for using the route of creating a new plugin, just so I can add the assets of the fonts and CSS file to the hosted cloudfront resources, rather than using the standard approach of uploading fonts through the Bubble editor and ending up on AWS S3 storage pools. Here is the trick I’m referring too:

Does Bubble use the unpkg CDN? Question

A-ha, @copilot. I’d never messed with the “shared assets” section of the plug-in editor. Thanks for the tip. That’s extremely handy! Your comment wins the Internet for me today. So this makes me still wonder a modified version of my question: “For my big custom config file script, should I continue serving that via AWS, or would it be better to upload that to Cloudfront?” I’m guessing the latter might be superior (thinking being that the AWS file bucket probably doesn’t exist in a CDN-like env…

A quick note before showing the results using GTmetrix. This is all run from one app, which was freshly created just to run these tests, so no other data or related pages, very lightweight. Also its on the free Hobby plan, which is running in a shared hosting environment, therefore these tests won’t be hugely accurate due to factoring in server load at the time of testing. With that said, I’ve tried to run the tests within a few seconds of each other in hopes of getting a similar testing environment for each page report.

Last note, before running these tests I deployed the site so it was using the live version, rather than version test. I am not sure if there is much of a difference between the two for file requests, but I think the live version is the most crucial for investigating at the end of the day. Here are the results:

All the results are essentially the same, looking at the Waterfall of requests made, each page will still request the font oddly enough, even if not used on the page.

image.png928×303 22 KB
Example here on a page that uses only the custom fonts, but still makes requests from Google to send Open Sans font and the Lato font that is standardised in app styles by default

From the results though, we can see the speed timeline for each individual file and there is a fractional smaller request time for using custom fonts (uploaded to Cloudfront) when compared to using Google fonts through the Bubble editor on text elements.

Now with that said it can vary in the wait time between Google’s servers and Cloudfront’s - example of 3 tests and the speed differences (again minimal ms here):

Now interestingly after deleting 3 pages and just leaving the ‘test-custom’ page which is using the Open Sans custom fonts uploaded, so not loading any Google font requests and deploying to live -
the requests to Google for Open Sans fonts are still made?

So to summarise from these quick tests, using custom fonts really isn’t a clear cut speed improvement factor and is a variable.

Maybe the results would change on a fully fledged page, with loads of text elements…though the initial amount of requests would stay the same surely?

Also it would help if Bubble consolidated the requests for fonts made on a page basis of whats needed, though I can understand the tricky technicalities of this with JS.

I just can’t quite understand why there are huge requests times though in the GET call for Google Fonts in an example test run a few days ago on a template page (a sizeable one sure), was Google servers having a bad day? 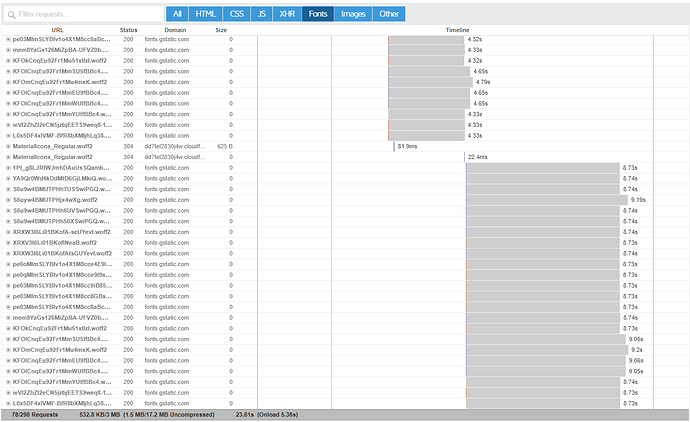 Well it appears not as a recent re-run shows somewhat similar results: 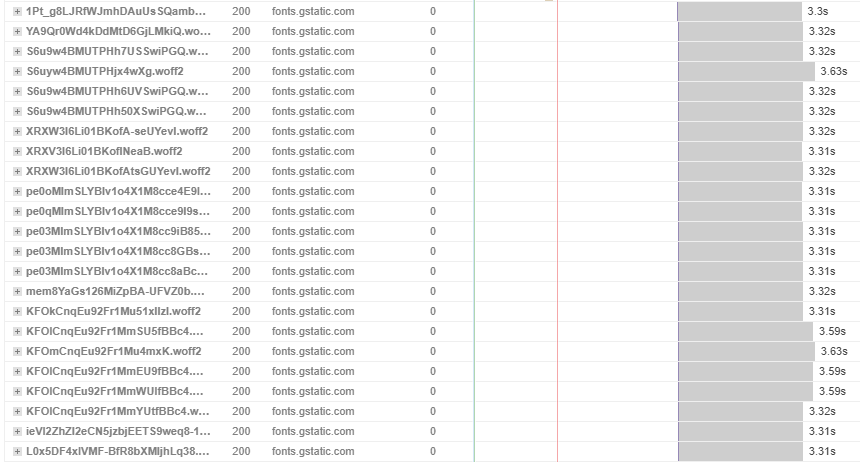 After these quick tests, I think I’m still none the wiser…

Hello, thanks for this very nice summary.

I observe exactly the same issue. Even for a simplistic page, with only one font, I have more than 40 fonts loaded !!! Each request to fonts.gstatic.com being ~20kb, it’s 800kb of data loaded for every single page of my app/website for nothing!

Have you found a solution to this issue ?

What has the Bubble team to say about this ?? Page load time for very simple pages seems horrible for many reasons but that would be great to fix obvious problems… 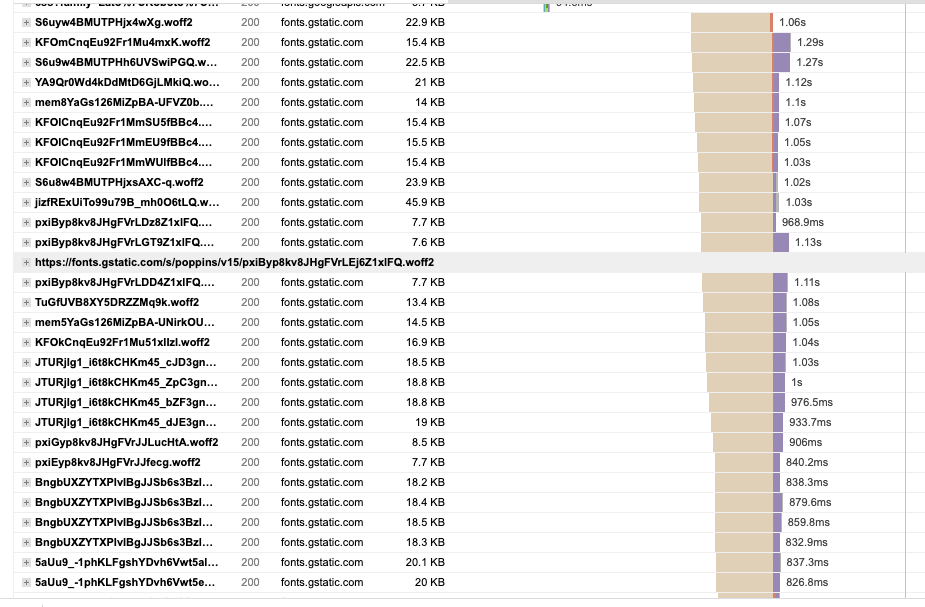