This release is one of the most exciting we had the opportunity to share on the forum! The first version of our plugin system is now live. It will take Bubble to the next level, and turn it into an ecosystem, where Bubblers not only help each others, but can also start extending the platform.

To start building plugins, you can go to your Plugins Page, and create a new plugin. You’ll also be able to define your identity on the platform (as a plugin builder, name, logo, support email, etc.). 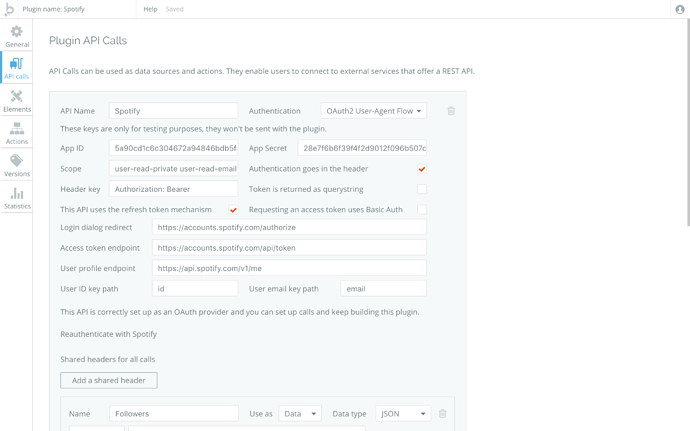 For this first version, we enable users to create some API-based plugins and share them and use them in Bubble apps. The current system is very much similar to the API Connector, but APIs are now packaged as plugins. If you already have some APIs in the API connector you’d like to convert into a plugin, it’ll be quite easy using the right click menu and copy-pasting.

Once you’re done setting up your calls (including authentication via OAuth2, private keys, Basic Auth, etc.) and have defined the few cosmetic aspects of your plugin (Name, icon, categories, etc.), you’ll be able to ‘Publish it’. Try to do your best to have precise descriptions of what the plugin does, as it’ll make search easier for other users. 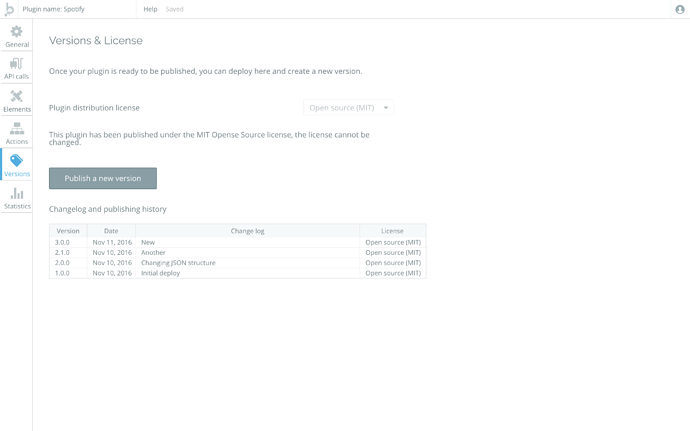 When you publish a plugin, you’ll have to pick a license. At this stage, we offer two licenses, the open source one (MIT) and a private license, which makes the plugin hidden to other users (and you’ll have to authorize some apps). Commercial plugins will come later as we extend the system to elements and actions.

Once a plugin is published, it will appear at bubble.is/plugins, and will have its own page (for instance this page) and will have have ratings, reviews, usage statistics, etc.

This is the first step of our plugin system. What we want to do next (that’s a big project so we’ll need a little bit of time) is to enable users to build news elements in Javascript, and eventually write new actions. Once we’ll have these three dimensions (API, Elements and Actions), Bubblers will be able to extend the platform in very various ways!

As usual, let us know how this goes as you create new plugins and use them/test them. At this stage, when you publish a plugin, it’s probably a good idea to test it in one of your apps. And thanks to @romanmg, @vlad and @gaurav for their help testing the early versions!

Great work, as usual. Very excited about this release

Jeez @romanmg - slow down there, you’re leaving the rest of us in the dust here

This is gonna be wild!

Looks good! How can we test the plugin before we publish it?

we offer two licenses, the open source one (MIT) and a private license, which makes the plugin hidden to other users (and you’ll have to authorize some apps).

Can you please explain more on the licenses? If private, can people still use the plugin? If open source, can people view and edit how the plugin is constructed?

Same way when you create a plugin for yourself.
These plugins are basically just simple API calls.

When you hit the ‘initialize call’ button is when you test it.

That being said, these plugins you create are always available to you but no one else if you leave it as private.
You can also use this feature to create your own private API library.

@romanmg Gaby, just tried your Medium plugin and got it setup in 2 minutes. I’m 100% sure that would have taken me hours to try to figure out myself. This is such amazing news. Thank you Bubble and everyone for creating these!! So helpful and beyond exciting!

@fayewatson Yes! So glad to hear it’s going well in the wild

Got my first plugin published, yay! Should be handy to handle dates from APIs like Stripe.

So legally it’s what you can read about the MIT license online. People have the right to use and modify the code. Effectively we don’t let people fork plugins (yet, but maybe we’ll do that one day), so that means people can use the plugin for free.

Private means the plugin isn’t accessible in the main plugin list, and apps have to be invited to use the plugin. This is useful for apis that are private to a company, for instance.

When we’all push for more advanced plugins with custom code, we’ll introduce commercial licenses, where using a plugin would require a payment to the plugin owner.

That’s correct. Having a plugin as private only authorizing your app is a good way to test.

Amazing work as usual. Thank you

Will test out your amazon login feature @romanmg !
What do I have to put in for App ID / API Key? And does it currently only work for amazon.com or for differen country-specific amazon stores (like Italy, Germany etc.)?

Amazing @emmanuel managed to add a plugin with little hassle. Keep it up man, send my regards to the team.

Great! You’ll need to register an app with Amazon at http://login.amazon.com/manageApps. When you do, you’ll receive a client ID (app id) and client secret (app secret). Make sure that for “allowed return url” it is the exact url for the page with the signup workflow.

I’m actually not sure non-US stores. Give it a try and see a non-US account can be authenticated. Would be good to know on my end too!

Incredible! You guys never cease to amaze me!