I love the new responsive engine.

EditorX cant do anything like Bubble can. Go build a social network or marketplace on EditorX and let us know how it goes.

Perhaps this might be helpful to some of you. I’m no programmer but I’ve just migrated an app that we had made in Bubble in the last 12 months to the new responsive engine. Here are some of my thoughts and suggestions as a result (it may be that there are somethings I just don’t know how to do in Bubble that may have made this easier so feel free to enlighten me!)

The App we had developed was 12 pages in size and had roughly 400-500 workflows (most often controlling button actions and navigation elements). It was designed to be used on web and mobile devices.

Moving to the New Responsive Engine

Overall it was a pretty reasonable process and I’m pleased with the result. The new engine makes it easier to enforce commonality across the site, easier to get the page to perform the way I want, requires far less groups and fiddling, and it seems pretty fast. I think it is a big improvement even though it took me a while to get the hang of it - oddly I can’t really remember how I used to work in the old engine now. Hope that helps.

Super helpful, thanks for the feedback!

Idea: When defining the layout of an element the default units are px rather than %. This seamed to make sence before, but maybe now it might be better to default to %.

My though process: All child element sizes are relative to the parent, henc px shoulld be avoided if possible. I typically define the highest order Parent as px (in most cases the page) and then use relative sizing for all child elements. The only typical exceptin was images, but ( "genius " ) the Bubble Architects have included Aspect Ratio - which negatest the need for this too.

I was just thinking the same thing to myself

@andrew18 @nickc
These are fantastic suggestions – I get particular excited about improvements to Bubble UI that can speed up my development.

I, myself, am generating a list of workflow improvements that can be discussed w/ the bubble team. Wrapping up MVP that has been fully developed in new responsive engine. Will release the list of Bubble UI recommendations then.

Overall, my impression as a 5 year Bubble veteran and power user is, yes, the new responsive engine is a step in the right direction.

Giving that I have been using and designing apps on bubble since 2016 and love how easy it is to design and build pages fast.

I have to be honest I struggled at the beginning with the new responsive engine especially losing out the capability to drag things around, but once I got the hang of it and understanding how columns, rows and alignments functionality works, I think with this new responsive engine you can create almost anything, you feel like this how it should be from the begning.

I think yes, the new responsive engine is indeed a step in the right direction.

@nickc are there plans on having dynamic positioning of elements (Dynamic X and Y values in case of fixed layout and dynamic “to be placed at x% width of the container” in case of row/column)?

My use-case is mentioned in this thread: Resource View in Calendar in new Responsive Engine

Are you basically talking about margins having not only pixel control but also percentage control so that you can say you want a certain element to be a certain percentage from the edge of the container it is held in?

If so yes I think that would be really helpful!

Yes that would be good too. But I guess that is mentioned already in the thread somewhere.

What I am asking for is to be able to determine the margin run time on the basis of some conditions.

My use-case that I have mentioned in my thread is of being able to position in a task in the timeline depending on its starting time.

So, say I have a row that depicts timeline of the day. Now if a user has a task at 9 am that task block should be shown there while the one starts at 3pm should show up there. If I could dynamically calculate that 3pm task should be 48% (or 220 px) away from the left edge, I would be able to position the task correctly.

Right now I can’t. Please do reply to my thread if there is a way you think that can be done.

Yes I understand now. I do agree you can’t completely do what you want to do with the existing responsive engine right now it seems. I would say that if you limited your users to only starting tasks at the top of the hour, 9AM, 10AM, you could create duplicate groups for each time block and show and hide them based on whether there was a task at that time.

In terms of how far the task stretches based on its length of time, @nickc had mentioned prior in regards to @boston85719’s post that he is going to allow the ability to conditionally define how wide or narrow things stretch based on certain conditions, that’s going to open up a huge amount of possibilities and it look it’s coming out soon. But that only solves the stretching of the block of time based on how long the task is, not how far or near the task block is positioned in the cell based on the length of time that it is.

So what I imagine this ultimately to be is that for each block hour in your sample app you’ll have a vertical column for each hour going down vertically, and then within that column there will be a bunch of rows, that span across those hours, and then you’ll have the conditionals working whether you can move boxes left or right depending on how far along it is on the timeline.

I think ultimately what the solution would be is you would have a bunch of event boxes flush at the left of each row, let’s say a maximum of 12 so that a user can create a maximum of 12 events along the span of time, and then you’d have to program each individual box with those conditional controls one by one.

Hi @nickc I’m having some issues with “fit to width of content”, and I could not find any documentation in the new responsive help guide. Maybe I don’t understand it correctly, but from what I can gather, the response I’m getting is not intended?

I have a text box that does not seem to be fitting to the content, and instead taking up a bunch of negative space in my row. I have conditionals set up to adjust font size according to page width. They’re working, but when the font size changes the text block is not shrinking to match it.

I have 2 elements in a row. My text is fit to width with a min and max, and my image is aspect-ratio-fixed with a min and max width. When I adjust the page width that row should scale both elements equally, but the text box’s width never changes.

“Fit content to width” stops responding on the text, and if I keep decreasing the page width my other element just shrinks until it hits the limits for the group, then drops to another row below.

Again, maybe I’m not understanding correctly, but this seems like the text box should not be wider than the text inside it if I have selected “fit to width”. 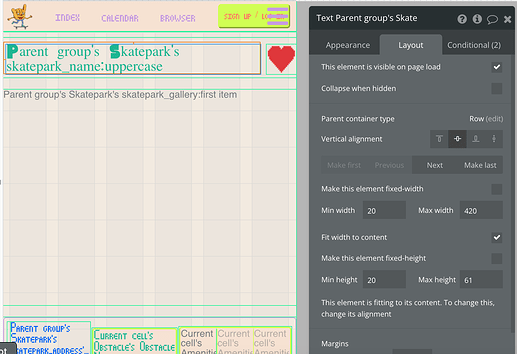 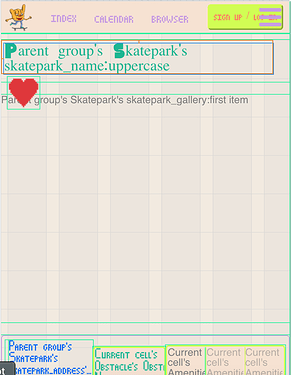 One thing I’ve been trying to figure out that seems like it might be impossible to do without code right now is having both a dynamic number of rows and columns for repeating groups.

Yeah, this has been mentioned a few times (and comes up quite a bit on the forum), and there is a solution that involves CSS, but no code is needed.

I requested this feature shortly after the new layout engine launched, and @nickc said it was a reasonable request, but no timeline was given.

I think it comes down to the fact that CSS grid (not flexbox) is used for RG’s.

Would be great to have out of the box though.

I think your understanding of the feature is correct, but it does not sound like the behavior you are seeing is expected. Its hard to say if its a bug or not without looking at your editor - but might be worth filing a bug report if you can’t seem to get it to work.

Filed. Thanks for your time.