Sending Multiple Rows of Data from Bubble to Google Sheets

I am trying to setup a Zap to take a full list of data from my Bubble Database and create multiple new rows in Google Sheets. Zapier seems to have a Create Spreadsheet Row(s) option and I have setup my Zap structure, but when setting up my Zap Trigger in Bubble workflow, it doesn’t appear to let me choose a list of data as an option. Am I doing something wrong? Is it even possible to send a list of data through Zapier or would I have to do this another way? If so, how?

So I’ve been working on a Google Sheet with associated scripts that pull records into Google Sheets via the data api directly. You could use this to say import a full table full of data

It’s awesome because it avoids any middleware like Zapier (i.e. another thing to break, has on-going charges and you’re limited by how far they’ve integrated).

I had a couple of issues that I’m almost finished solving, after which I’ll make it available for people to use:

Long story short - I think what I have in it’s current form would be perfect for you if you just want to pull down a bunch of records in one go vs. going record by record with Zapier.

I had this sitting on gumroad with instructions to replicate the Google sheet and set it all up (takes about 5 mins). But I’ve pulled it down to solve those two issues and will put it up again in the next couple of days once I close out that second issue

But if you’re keen to use it. DM me and I’ll let you know how you can get access to it right away

Bubble x Google Sheets Solution Hey everyone, On a project recently I needed to get data from Bubble’s DB into Google sheets and all of the solutions I could find seemed way more difficult than I thought they needed to be, so I’ve put together a super simple solution that’s essentially a Google sheet with some embedded code that connects directly into Bubble’s data API. So there’s no plugins, you can avoid the API connector, third-party tools & subscriptions and all that. Takes less than 5 mi…

Sounds awesome. Sadly, I can’t seem to figure out how to “DM” in this Forum…

Just sent you a DM. But so you know for next time just click on the person’s name and click message. 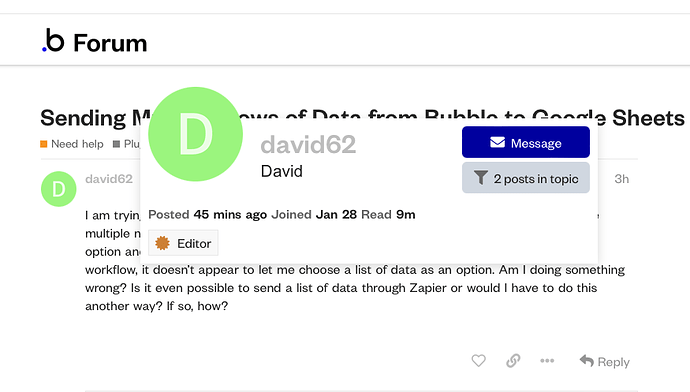