Say that I wanted to create a page where list all my users along with other details (like email address, etc)

What should be a good way of doing this?

Also, how do I prevent users from accessing this page ?

Just a simple RG searching for all users should work.
To prevent users from accessing this page :
Set user type in users table
For admin or whoever needs access to this page, set user type to “Admin” and for all other users set user type to “User”.
On the page where you’re displaying all users list, do this in Workflow
“Current users email is empty or current users account type is user”
Goto page index(or whichever page you want them to redirect).

I’ve tried doing this, but it only shows my current user’s record. 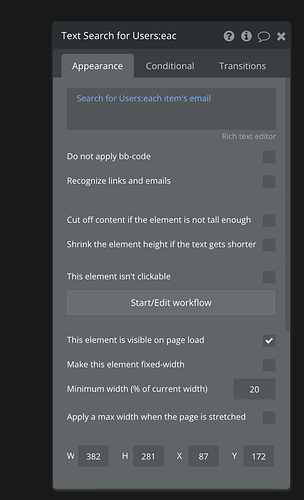 @maheshkasindi got it. so how do I do this? what should I put instead of what I have right now?

Watching a couple of YouTube videos will surely help.

Now drop text element in that Repeating group and select dynamic content “Current cells users…” and select whatever you wanna display there.

It’s still only showing me the current user’s email address. Could it have something to do with permssions?

This will hep you

Setup your first repeating group on the index page to show a feed of Recipes.

It’s still only showing me the current user’s email address. Could it have something to do with permssions?

Yes, it likely has to do with your current privacy rules - so check them to make sure there’s nothing there restricting you from seeing all users (you might want to create an admin user type to manage this)

Got it! It’s working now

I changed the permission to reflect this - I’ve set a slug for my user as “admin” and allowed only admins to view all data.

So now is the next step. One of the values I want to see is a list of texts, like “a,b,c,d”. I want to show the user’s name, for example, but next to it, I want to show which other users have a similar item in their list.

So for example, let’s say that user a has “a,b,c,d” in their list, and user 2 has only “a,e,f,g” in their list. I want to show user b next to the user a because both of them have “a” in the list (and show that “a” is why I am showing them both.