Better Uploader is a feature packed tool for bubble developers of all skill levels. One of it’s best features is that it can be incredibly useful for app optimization for large scale apps. It can cut down on a lot of processing time (in case where apps are handling large files and or multiple files at a time), and let’s not forget bandwidth fees

What does this mean? Well, let’s look at the exposed states: 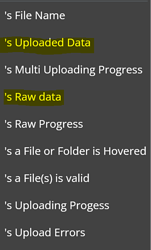 Pay attention the two highlighted exposed states, this is the interesting part. Once a user uploads a file to the file uploader, an exposed state called “Raw Data” is made available; it is a list of data Urls which can be used as the source of an image in order to preview images before uploading them to the server, for instance.

Better yet: a plugin builder might want to run some code on an image before sending it to the server. For example, I’m building a filter plugin that applies standard image filters to images. The normal workflow would be to use the default bubble uploader which automatically sends files to the server automatically, so the builder would have to

I say, BLASPHEMY to such inefficiency!

My upload compacts that down to this workflow:

Et voila! Better Uploader cuts down on processing in half in some instances. Imagine, having to apply modifications to 50 files and doing it the default way, you’d have to perform double the processing.

How can one of the uploaded files be deleted, whether before or after using the “send file to cloud” action?

And what are the best practices to enable the user to modify one or more images after uploading them without having to download them after modifying them and then re-uploading them?

Right now, that feature is not supported by default. The user would have to select the files again. You’re not the first person to ask about this, so I will probably add this feature eventually.

An image duplicates and an image disappears:

I do this workflow: 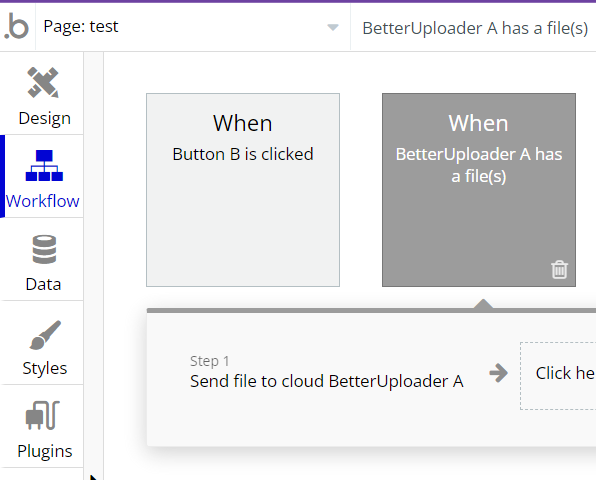 a) Make sure you’re on the latest version
b) Have you tried it on the demo page?

I tried to upload three files (by clicking and drag and drop) yet I don’t see the issue you’re describing. If you can’t recreate the problem on the demo page then please check the editor to see how I got it to work.

I am on the latest version
and this screenshot from demo page: 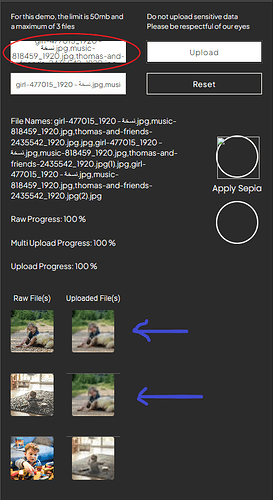 another thing, the names of files (I drew a circular line around it) I need not to appear in the element and for the element to keep the placeholder, how can I achieve this?

I tried to upload file while another files uploding is in progress, and this what happen:

The bug is fixed now. I also stopped sending the file names to the placeholder, so now when you upload a file it says 100% on the uploader instead of a bunch of file names.

This is the better uploader not just because of it’s features but also because of the good support from the developer.

Thank you very much.

Thank you for the kind words! 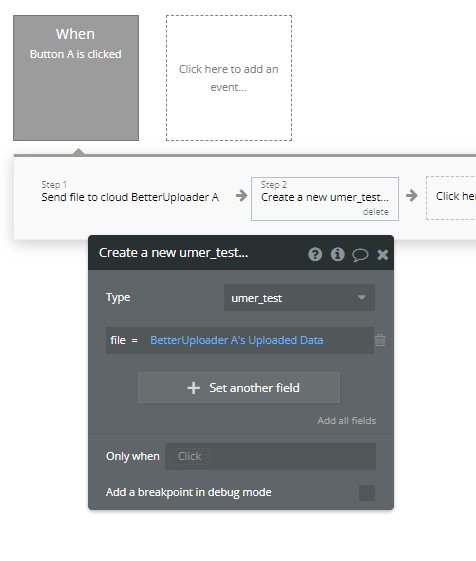 I somehow cannot restrict to multiple file types? is there something wrong with the syntax?

if i just have one or none, the uploading works

Any easy way to compress images before uploading to bubble?

How do you take the files out in case you put a file that you did not want?

: By resetting the group.

Thankyou Mate! You made my day

The syntax is incorrect, but the last update broke this functionality, so I’ll let you know when I update to fix the problem. I confirmed the issue on my end!