I’ve been keeping a list of things that I think would really speed up my Bubble workflow. I know that some of these have already been suggested by multiple Bubblers before, but I wanted to make this list that included those ideas as well, just in case they’ve gotten lost in the forum. If anyone would like to make suggestions to these, please feel free to reply below!

@allenyang First of all, Welcome!

I saw your other thread and thought of including these ideas in there, but they aren’t related to third-party services. Absolutely no pressure to read through these of course if you’re focusing only on third-party services right now. Thank you so much!

@fayewatson I like every one of them. Great ideas to speed up development!

Great idea and appreciate the time spend behind each section to keep it simple. Hope @emmanuel will see this

Great point @fayewatson! Cloning element conditions would be nice add on too to speed up things.

Thank you so much, @boostsalesgroup!

Thanks! I didn’t know the functionality was already there. Pretty sure I have tried it before. Anyways this speeds up things a bit more for me.

Hopefully we will get your other improvements too!

These are great ideas, some which I haven’t thought of that would definitely improve development speed.

Also have some suggestions of my own.

Great list, @fayewatson. I’d also like to see an inline element search function, similar to the “Search for new elements…” search, but for the actual elements on page. Right now you have to either 1) remember where the element is and dig through the tree manually, or 2) use the page search function, set search type = element type, set element type = whatever, click the this page only box, and then click enter, like this: 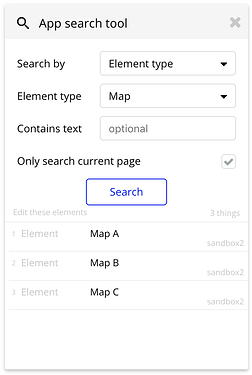 … As opposed to a simple type-ahead search similar to this (but instead of just pulling up “Map” as in this example it pulls up a list of Map A, Map B, Map C just as the page search does in my above example): 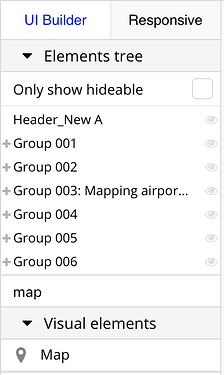 (I would love for someone to tell me this already exists and I just didn’t know it!)

Great list @fayewatson - thanks for posting it. I have long felt that creating tools and features to make programming quicker and friendlier with Bubble should be a priority for the Bubble team, along with performance improvements and all those other wonderful things they must be working on.

In addition to this already great list, I would also like to see:
A) some sort of smart select tool that would allow us to select all children of a parent for example, or all siblings, or all elements of the same type etc.
B) the ability to swap the positions of two selected elements
C) a way to set a group’s type and in one click, have the type and value cascade (as parent group’s thing) down to all/selected sub groups within it.
D) as I’ve asked previously, a sweeper tool to sweep all elements up or down from a certain point, like this https://youtu.be/xWurQ7-KTFU?t=40 or just the ability to move all selected elements up or down by a specified value in any direction.

I 100% agree with your suggestions. A custom :formattedas function for geographic locations would save so much time, and I agree – sometimes I want to tweak a responsive setting (e.g., the fixed-margin of an element) without wanting to go to the responsive editor, making it visible there, and then adjusting that. Great ideas!

I think that this is not obvious since the search looks like a dropdown, but is this element search what you are looking for?

FindElement.gif1236×615 1.17 MB
(I also have a difficult time finding elements on the page sometimes. I believe that there might be a bug with the issue checker in that when clicking on an issue, it doesn’t always bring you to the element that the issue is referring to.)

I completely agree with all of your suggestions! Every single one of those would be huge timesavers!

Thanks @fayewatson for taking the time to illustrate the other suggested ideas and for adding them to your original post. Great to see.

Let’s hope the Bubble team implements at least some of them.

Brilliant Post @fayewatson! I hope the Bubble Gods are looking down at you.

I’m in favor of all these changes

I will add one more:

@fayewatson I have been using Bubble for 4 years and I don’t know that I’ve ever clicked on that “dropdown”. Always nice to learn something new …

I’ve definitely had a need for that one too; I’ll add that to the original post!

@edd Ah! I know that feeling too; I only very recently found out that you can copy an entire text value that contains a combination of static and dynamic expressions (I was previously re-creating them each time). Glad to know it now but I couldn’t believe I never saw that option for years… 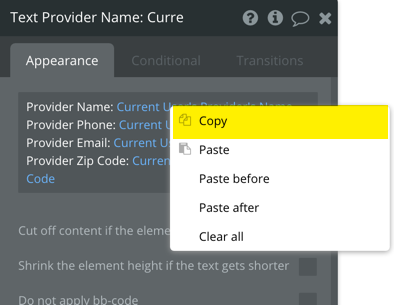 (I eagerly await someone’s reply telling me that that is also currently possible.)

No, that overwrites the entire single expression. I mean a feature that might be called “Copy selection” where if you had a long conditional expression like:

you could just highlight and copy the Current page width <= 1040 and xyz custom state is "yes" part and add it to another dynamic expression somewhere else in your app, or just cut the selected section.

Use case: Suppose you’ve been using the above expression but no longer care about the Current User’s favorite color. You either need to rewrite the expression from scratch with only the last three clauses, or convert the first one into something sure to pass the condition like Current User’s email is not "[email protected]" (or equivalent nonsense).

I totally agree! That would be a huge timesaver; I’ll add that to the original post!

some great ideas here, thanks for sharing these, I can appreciate the time and effort put into these.

Each point is all so useful. But just thought I’d my 2 cents.

1 - Building expressions where numbers or geographical addresses are the expected results and not being able to search is quite a time killer, especially with big pages. It would certainly speed up development, make things more fluid then having to scroll through lists of elements to find.

4 - Its quite a small thing, but very handy and just adds the extra layer of organisation.

5 - Quickly adding all fields of a thing into a workflow action e.g. create, make changes…would be another nice speed booster for development.

9 - Being able to multi-select elements from the elements tree would make things so much easier.

12 - This is quite essential, as is the responsive preview is pretty cumbersome, but having the data type render actually data would be oh so nice.

13 - Map extraction data like the custom dates composer is a great idea, will save having 4, 5+ expressions, consolidated into 1.

18 - This can get very tiresome having to create new gaps/spaces in between groups and elements. It would save having to use the empty hidden collapsing group trick and then fiddling around with getting the margins just how they were.