It’s a request to all plugin maker’s to not to delete a plugin, which is used on many applications (Each plugin shows its usage) so a midnight deletion will make any app/site unstable and through that someone’s business/job may get affected.

This generally happens with Free plugins, At one point developer makes enough noise to get the users by giving free plugin and overnight he change his mind to add a fee & re-release the same plugin to bubble store & deletes the Free one, Sometime there wont be any alternative and bubbler’s need to delete the missing element from the app

It’s time for bubble to bring some good faith on its users, for the benefit of bubblers @emmanuel

**EDIT I UPLOADED TWO… ONE DOESN’T WORK… USE THE ONE TITLED “TICKER TEXT (MARQUEE)”, NOT THE ONE CALLED SIMPLY "TICKER TEST" Hey guys, I just published a little plug-in called “TICKER TEXT” You throw it on your page, type your message, pick a color, speed, and watch it go. I use it for alerts but you can use it for scores, stock quotes, or whatever. Shout out to my good friend @jarrad for helping with the plugin-builder. I have a ton of custom script I use via-html elements but it’s difficul…

Would be great to have an archive/deprecate option where a plugin continues to work as it did for current installs but is no longer available in the marketplace.

Plugins will still continue to function if the developer deletes it… 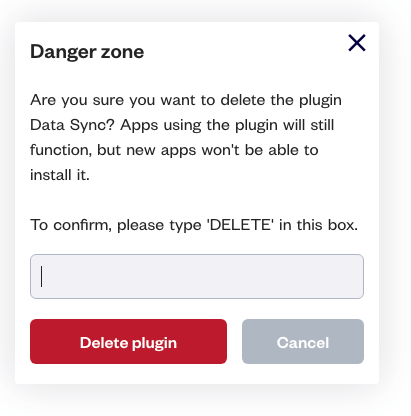 Good to know that this is available to plugin developers, Why delete at all, as a plugin may be another app’s main inspiration on a thought. Like the ticker text was another person’s “Stock Market” app’s main thing.

Its not always works as the message say’s as I had to remove the “Deleted Plugins” from app due to dependance (Some plugins calls API, so it won’t work as the develper removes tockens/some thing behind it). Its better to Keep as @eli suggested, If plugin builders are cool with it.

It’s not an option for developers, this is how it works for all plugins, so don’t really understand your post. Many reasons for deleting a plugin.

Like the ticker text was another person’s “Stock Market” app’s main thing.

Many reasons for deleting a plugin.

Private plugins sure. But, as @melon noted, the ability to delete a plugin that has been published as Open Source or with a Commercial license harms the Bubble community’s faith in the plugin ecosystem. Why would someone trust their app’s functionality to something that could go away and they have no control over?

Thanks for the feedback/note. However, a plugin author cannot ‘delete’ a plugin that is used in production by other apps. When a plugin is deleted, it’s not available any more on the marketplace (free or paid), but apps using it at the time of deletion still can use the plugin.

If you find a case where that’s not behaving as such, please file a bug report and we’ll look into it.

Just curious, if a paid plugin author removes their plugin off the store do they still get the subscription costs from users currently using the plugin?

Thanks @emmanuel for the update, Have some suggestions on behavior after deletion

We pushed a fix for 1. For 2, it’s a bit of a bigger project, but you can achieve this fairly quickly by using the Search tool and search for all elements for a given type (and the plugin tab will show you the element types a plugin offers)