Has anyone got the Parabola bubble export to work?

Trying to get some data out of airtable into Bubble using Parabola.

Has anyone got it to work? Documentation is pretty useless and I am burning through Parabola credits trying to test it (now there is a shitty business model if ever I saw it).

I have a few working parabola to bubble workflows. I can help you will pm you tomorrow afternoon.

Have you tried airtable api?
Intergromat?

Yes, I can pull in the data using a Bubble API workflow and using the brute force method I can do it in Integromat (delete everything and then replace it all).

But thought I would give the “new” Parabola/Bubble tie-up a try. It should mean only updating those rows that have changed.

Actually, I think I may well have it working - I think it needed a Content Type to work.

Are you sending data from bubble to parabola or vice versa? I’ve only done it parabola to bubble.

Yeah, Parabola to Bubble. It was the Content Type I needed I think.

Where are you adding the content-type in parabola? Did you create a manual API in parabola to export back to bubble?

They have a bubble widget plugin now that you can use to export back to parabola. All you need is to enter your:

I am using the Parabola plugin, and needed to add the content type 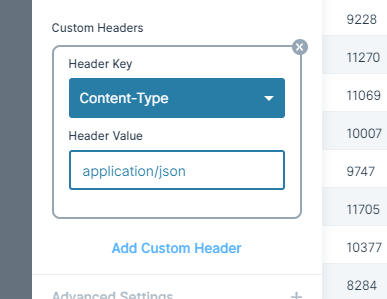 My data is in Airtable, and the limit of 100 records makes it quite hard to show markers on maps etc so I am importing skeleton data into Bubble and then I can link out Airtable using the Id if I need to.

It is quite slow and annoyingly you can’t stop parabola when it is running, so it can take an hour to wait before you realise you have messed up.

I haven’t had to any any custom header. Mine is blank. No problems running it for 10s of thousands of items. My speed average is about 250 per minute for each bubble export widget.

Ha, yeah, I did wonder if it was coincidental

Hi @gilles , I am not understanding what I need to add in the body. Is it the whole table converted to JSON ?
Also does this work well when using PATCH ? For some reason I’m getting a 405 error and that doesn’t seem to make any sense.
Many thanks

You’ll need to hand-bomb the json code into the parabola api export window. It’s pretty easy once you see an example. I’ll post something by tomorrow on how to correctly write it in parabola.

I haven’t used PATCH yet, not sure. Check the parabola documentation.

I posted over on the Parabola forum.

PATCH works fine, but it is really picky about JSON format and also make sure you have the fields named correctly.

Hey @NigelG thanks for sharing. Have you ever tried to export from Parabola and update fields which happen to be of a relational type ? How about lists ? Anyway I’m having a hard type with updating one of the columns and I believe it might be because it is both of those things(relational type and list). What do you think ? Thanks

Have you ever tried to export from Parabola and update fields which happen to be of a relational type ?

No, I haven’t done that yet.

The “basic” export is hard enough!

I’m not a fan of parabola’s new pricing plans. Starting to look for other alternatives or just doing all my manipulation work in bubble.

Actually, they were pretty good when people kicked up a fuss.

Compared to making you pay to test the (pretty poor) Bubble integration … the current pricing is in some ways better than it was.

Personally, I think they have really stalled, and are headed down a “let’s integrate Shopify” route as that seems to be where the money is, not Bubble developers.

One of tools I would drop like a stone if a cloud based REST enabled ETL tool came along and a fair price.

In my case there were several things that helped :

No trailing commas, you cheeky non-coder monkeys. (i.e. all pairs are separated to a new line by a comma, except the last entry. Look in the JSON above.)

Final silly mistake: remember the API Endpoint Address is different for your Live and Development versions. So you’ll need a /version-test/ in the URL to update Development data.

(Good to see you back here buddy, you haven’t fully abandoned us for Wappler then?