I have an issue, where Idisplaying an image works, unless a repeating groups image is clicked.
Here’s what I have:

And here’s the question:

Now, I also give the user the option, to click on one of the images in the RG, to display this image in the bigger Image below the RG. That works perfectly.

Unfortunately from know on, the first part doesn’t work anymore. So, when I make a new choice from the Drop Down, the bigger image is not changing to the newly loaded smaller images in the RG. It should now display the first image from the GR’s images.

So, it loads all the smaller images into the RG. But the bigger images is not displaying the first image from the RG anymore.

Clicking an image in the RG and displaying it in the bigger image still works.

Hopefully you’re not confused now and maybe one nice sole have a answer or hint to this problem.

Thanks for any help. 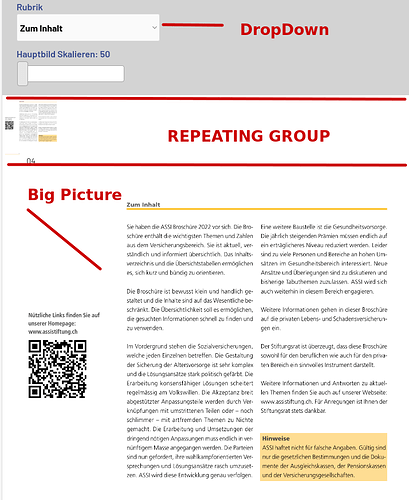 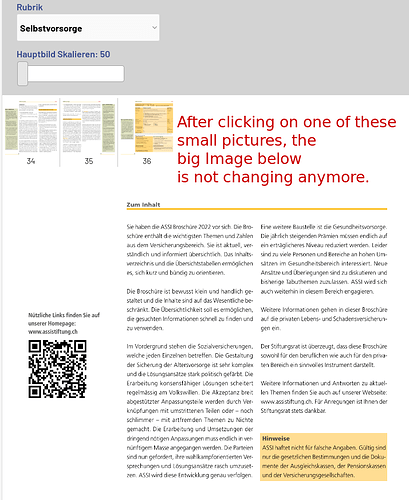 Instead of setting the big picture’s source to the RG’s first image (which is static for each RG), I’d recommend setting no source and adding the source dynamically via Workflows triggered on Dropdown Input’s value changed and on clicking any item in the RG.

When the dropdown value changes, run a WF that ‘displays data in a group’ and sets this RG’s first image as the data source on the big picture group.
When a small image is clicked you can similarly set it as this image.

That did the trick!

I was not aware, that it’s possible to create workflows from “Change of a elements Status”. I found it when I was switching to the workflows directly. I always used the route to click on a element, and from there going to, or creating the workflow. I didn’t knew it was possible to start a unattached, WLF directly.

With this in mind, I had no chance to create a WFL from the DropDown element, since there is no button/way to create/start a WFL. So it’s kind of a inconsistency of bubble?

I had another idea to improve the app even fuhrter, by pre-loading all pictures in a RG, and then filtering according to the DropDown. I will try this too.

Many thanks again and have a happy day mate.