I’m looking for a good plugin for turning groups into images to use dynamically for social graph images.

Anything that you’ve found that works as advertised?

I think you might be able to use the built in function on the group element to set the background style to image.

Oh sorry I should clarify - I have a forum post. I essentially want to take the whole group (with the forum post title, Creator’s profile picture, # of comments, etc)

And then turn that whole group into an image, to then use as the social graph image for Facebook/Twitter/etc so it’s dynamic for every post.

There are several plugins that can do this. Good luck!

Yes, I was confused. Never even thought about the idea you were asking about. Glad I found out about this possibility…I think it would be great for a ticketing system I am creating.

@AliFarahat you know a way to turn a group of elements into an image to save to a database object field?

Have tried some other plugins to no avail.

This would help with creating dynamic social share images for any page with a data type set (people, products, etc.)

I have a puppeteer google clould function that gets specific data from an Instagram profile. Since its based on puppeteer it can be altered to render the an image of a page or a specific element. It’s not the fastest but its robust. Another option is to go with a library like this one https://github.com/tsayen/dom-to-image but I never tested that.

Have a look at this service

Iframely gives you simple APIs to have all the Web's best media on your site and on all your users' devices.

Nope. That’s not it.

have any alternatives, Keith? for turning a group of elements into an image to save to the database?

Try looking at “html to canvas” options. Not overly experienced with js but there maybe a library you can use and then you just need to get the content results into bubble with a workflow. In theory.

I don’t know if any of the existing plugins for this are any good, but did you try this one?

Hey All, This new plugin allows you to convert groups or elements to a PNG that can be stored or downloaded. Simple to use: Place the Element to PNG Element on your page Make sure element IDs are enabled in your Bubble general settings Use the Element workflows and Element value for fetching the picture Demo and more info: https://codurly.com/element2img Please contact us for any bugs you find

I still can’t seem to find any group > image converter plugin that works.

I’ve tried Anything 2 Image and the free Elements/Groups to Image.

@levon I don’t see any documentation for the Anything 2 Image converter - is there an editor link anywhere?

I am trying to create& save this dynamic image for all Nucode.co user profiles > 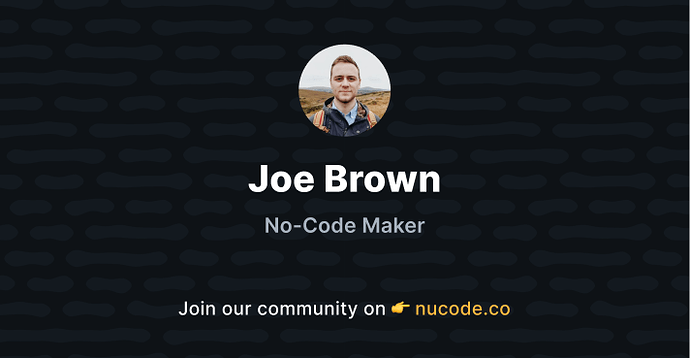 here is the editor link - https://bubble.io/page?name=index&id=pwc-anythingtoimage&tab=tabs-1

Thanks! I’ll see if I can get it working.

@joe5 can you show your workflow as a screenshot? 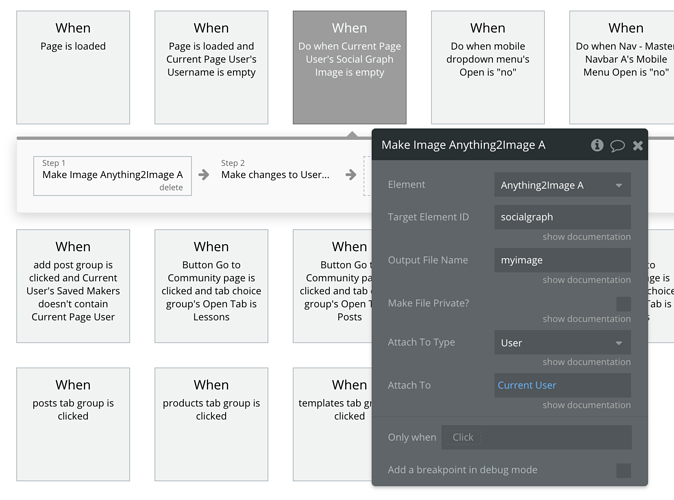 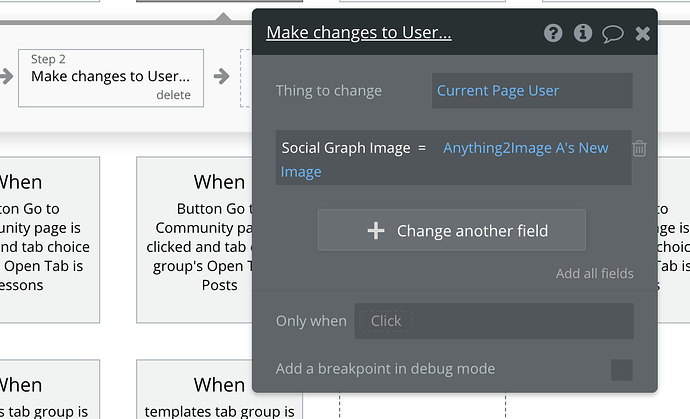 I figured it out!

Noticed you have another workflow for when the image is successful, so I was saving it too soon.

So - creating a single image was doable for a regular group.

I did try with a popup as well as a hidden group, since I won’t want to show the social graph image really, but that doesn’t work unfortunately.

Now I’m trying to wrap my head around how I could create a workflow to dynamically create all 1000+ users social graph images.

I’ve tried placing the component in a repeating group along with a group to take a pic of, but unfortunately that doesn’t allow me to run a workflow on that Anything 2 Image element when it’s in the repeating group.

Know of a workaround?