Sorry for the slightly delayed update – the 1st fell on a Sunday this month, so I decided to bump the update to Monday. You can read the prior update here: Monthly Community Update -- October 2020

This month, like last month, is light on product updates: most of our engineering team has been focused longer-term investments in our infrastructure and code, including multi-month projects, bug fixing, and stability improvements. While not all of this work is highly visible, it pays off in terms of platform stability, and is necessary groundwork to continue to scale with our community. On that note, our community-building and educational projects have made a lot of headway this month, and we’ve been excited to see the impact.

Changes we made this month

On the community-building front:

On the product front, as mentioned, this was a modest month, but we’re excited to launch an idea board for upvoting feature requests. This has happened informally on the forum, but it’s hard for us to quantify the degree of interest in any particular feature, since there’s no clear “click here to vote for this”. Bonus: if you vote for a feature, we’ll notify you when we build it! In addition to the idea board:

On the team front, we’re pleased to welcome Gerry to the engineering team, who’s taking time off school to intern with us.

This month in numbers

Things on our minds

This has been a good month for overall stability compared to the last few months. We’ve had less downtime and fewer bad code rollouts, as well as seeing fewer bug reports that needed escalation to engineering. It’s gratifying to see the focus and investment on this pay off. We’ve been turning our attention to some of the more infrequent, harder-to-reproduce bugs that are sometimes reported: these bugs tend to have the biggest impact on apps with the most users, since while they tend not to be noticeable at small scales, at larger scales they crop up often enough that they can be disruptive for our biggest users. These bugs tend to be particularly difficult to track down: usually it’s a cycle involving us deploying logging, waiting for the bug to occur again, examining the logs, and repeating until we’ve narrowed it down. But it’s satisfying that we’ve been able to clear out the incoming bug queue enough to give at least some of these bugs the attention they deserve.

Version control remains a reliability hot spot – we still get regular version control bug reports – but we’ve resolved the staffing issues I mentioned in the last update, and are now making progress again on cleaning up the various causes of problems.

On the team front, we’re continuing to professionalize and specialize. On our success team, we’ve created a specific team of “Bubble engineers” responsible for triaging bug reports, and on our engineering team, we have a team responsible for handling escalations. We’re continuing to aggressively hire on both teams, and we’re looking to bring in a VP of Engineering to lead our organization-building efforts, since we’re reaching the point in our evolution where we’re ready to bring on experienced senior leadership. As I mentioned in the last update, the investment in this kind of team-building shows up as a short-term burden on our staffing, but the long term impact is that we can achieve levels of quality across the board that it’s just impossible to do at our scale with a ten person engineering team.

What we’re currently working on

New initiatives since the last update:

Updates on our ongoing initiatives:

Best wishes to everyone, and hope you all have a happy and healthy November,

Thanks for the update, Josh!

Keep up the good work you guys!

Thanks for the update!

Thank you for the update. Always look forward to these monthly reads.

Great update! Just wondering for the ideaboard, I am still not able to see the ideas that have been submitted. It’s so weird… 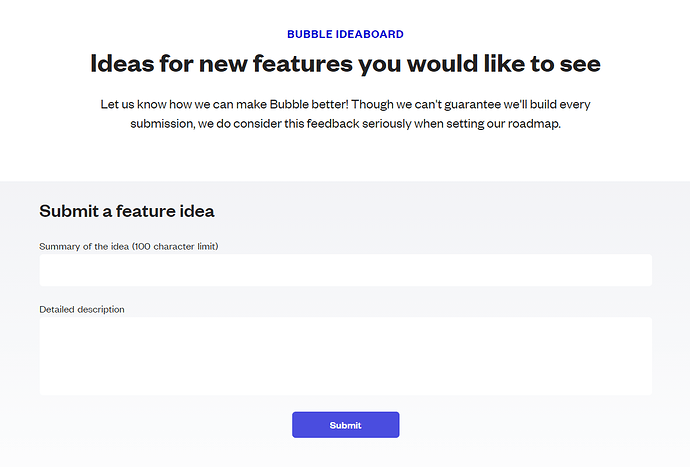 +1, having the same problem

if you start typing, other ideas are suggested.

Thanks for the update @josh

if you start typing, other ideas are suggested.

Splitting the main cluster into two release tiers, Immediate and Scheduled, is behind our initial estimated release last month because we ran into some unexpected technical complexity, but we’ve worked through the complexity and the project is moving again

Hi @josh , thank you as always for the update. Could you elaborate a bit on that point? I may have missed something in other threads. I mean what the feature is, not what the complexity was

Thanks for the update as usual!

@petter Re: multiple tiers, here’s the original description from a few updates ago: “Also on the infrastructure front, we’ve begun work on building the capacity to split the main cluster into a fast track that gets code immediately, and a slow track that gets code after it has been in production long enough that we’re more confident that it’s stable. While a lot of our users want the latest and greatest version of Bubble, users who are at the point of scaling up their applications would often prefer to trade instant availability of new code for more stability. This is one of the reasons that users upgrade to dedicated plans, but we think there’s a middle-ground of users who are far enough along that stability is really important to them but who aren’t at the point of being able to invest in dedicated. We plan to offer this as as an opt-in feature on our higher-tier main cluster plans, as a way of mitigating the impact of bad code rollouts and transient production issues on our customers with more established businesses.”

Great update! Just wondering for the ideaboard, I am still not able to see the ideas that have been submitted. It’s so weird…

We haven’t built an interface for browsing through – the idea is we want to see how many people independently search for the same idea to get a sense for how popular it is. We were a little worried if we show all the ideas in a list, we’ll get more votes for the ones at the top of the list, and less for the ones further down, which will skew our sense of how many people want what. That said, not sure how big a deal this is so we might build this out down the line

We’ve launched two live webinars: “Intro to Bubble” and “Office Hours”. The Intro webinar is designed for new users, and runs every Tuesday at 11am. We give folks a rundown of the editor, do a live build of an app, and open it up to Q&A at the end. Office hours are every Thursday at 11 am: we use Zoom breakout rooms to group people together to create a collaborative environment where people trade notes and get live help from other users. Our team bounces around the breakout rooms to provide additional help as well. We’re excited about the opportunity to build community, deliver live support and training, and increase overall success on Bubble.

I am working on a Bubble project to create an online video meetup tool where breakout rooms are much more accessible than in Zoom. Just take a look at roooom.io for a first impression.

Would you like to organize the office hours in Roooom?

If you’re interested, we can plan a demo session for you and some of the Bubble team members.

Thanks @josh for such good news and happy to see the care you give to us !

Do you have informations for bootcamp ? Will you propose a bootcamp in different langages ? I will be happy to make it in French because it is easier to learn Bubble in your langage I guess…

We now have a working prototype of a potential direction for the new responsive engine, and we’re in the process of gathering feedback on it to confirm if that’s the direction we want to go in.

Just came by to cheer this up and let you know that this feature is making waves into the no coders slacks !! Hit us up for pre alpha testing

Our Zapier plugin is now going through Zapier’s approval process, and we’ll release it as soon as that’s complete!

Should we expect something similar of integromat’s integrations ?

Cheers and again thank you @josh and @emmanuel for taking the time to explain the inners of Bubble.