You can try the working demo here:
Zeroqode Phone Number Input with Formatting 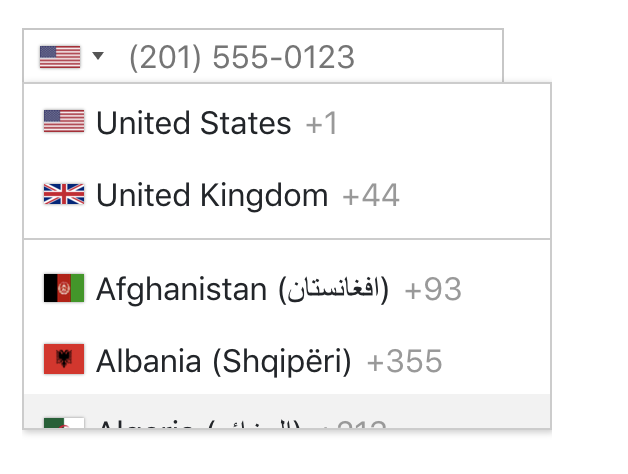 we’ve made a gif to better demonstrate this plugin

Just purchased and used this plugin. It’s a real time-saver, thanks! Very easy and straightforward to use, great job @levon!

I think it’s just missing the possibility to customize the font family and font color (both for the input field and the error/success messages). Any chance you add this in the near future?

Side note: it also seems that the border-radius is not taken into account (even when we specify a number greater than 0 all corners remain sharp), but this is not a big issue, we can remove the border alltogether and achieve the desired style with a group around the input.

Hi @Lucien
we have added font, color and family for phone number input, as well as success/error messages to this plugin.

Side note: it also seems that the border-radius is not taken into account (even when we specify a number greater than 0 all corners remain sharp), but this is not a big issue, we can remove the border alltogether and achieve the desired style with a group around the input.

this works, you just need to specify the unit, for example 50% or 50px

Hi @levon! I’ve got a short (and hopefully simple and straightforward to implement) feature wishlist for the next release of the plugin. Please take a look below:

The moment it gets resized, it starts acting weird:

I tried circumventing the issue by keeping the input at the default value, stripping off most of its styling, and creating a disabled input styled as I liked to serve as its background. However, the country selection click area became too small and, even more problematic, the dropdown got cropped out entirely when activated. I realized the approach I took to fix the problem had been probably just a little too much hacky, so here I am writing this.

Let us check and review the feedback, we’ll update on the matter asap.
Thanks for understanding.

as for the other issues you mentioned, unfortunately those cannot be fixed due to some Bubble limitations.

Please support us with a retweet

Wow, you guys are FAST!

Thanks a ton, I can’t wait to try it out!

Would it be possible to localise the country names for the Phone Input plugin? This way, the user can look up the country based on the language set.

Ideally there could be a setting in the plugin to pass the language to localise the countries’ names.

HI @miguel
we might do it at some point later, but not at the moment, I’m afraid
sorry about that

@levon
Would it be possible to style the input box itself? Like change the background to a flat color or image?

Sorry but no, you can customize border styles, and Font styles only, you can’t change the background of the field.

Thank you for reaching out,
BR,
Nik.

We’re trying to make a phone number input where someone can copy and paste from their phone - say iphone for example - into our website form. Right now the user can’t do that, and I’m told it has to do with the difference of how most phone contacts format phone numbers with +1 and bubble not doing that.

Does this plugin help with that issue at all?

Hello there @shubha.bala, please can you show me the flow which you want to implement in your application, cause I need to understand the functionality, cases where you wish to use this phone number after user pasted it in your form.

Once the phone number is stored in our database, we use Zapier to send it to another service called Textline where we will send them text messages. When I send it to Zapier I already have to manipulate the data (I believe Zapier wants XXXXXXXXXX and I just truncate the field before I send it over), so I don’t think the format matters as long as I can manipulate it to be the right format when I send it to Textline.

The main issue is still just how can I use my iPhone, copy a phone number from contacts, and then paste it into the bubble web form.

Hello there @shubha.bala, you have to paste the number in simple input with text format, and it will be saved fine in database if the field will be also as text data type.

Hope it helps you,
BR,
Nik.

First of all thank you for plug-in it is wonderful but
On mobile phone, don’t you think that the countries selection drop down is so short and uncomfortable to select?