Awesome, that was fast! Thank you

I’m planning to use this mainly for navigation (to show and hide pages dynamically for single pge apps). Currently, I’m using url params to view and hide groups(page sections) by using the workflow “go to page”. I want to use this for navigation by having “current_pageSection” or “current_pageView”. However, when I use that method, when browser’s back button is clicked or go to previous page is initiated, it will go back to previous page outside the app, not the last pageSection.

@gaurav I got an error when I am using OptionSets for the type of variables. Is that a limitation?

@cal, I think some users have tried to use option sets in plugin fields as data sources and have faced issues, because the corresponding getter and setter interfaces don’t match to custom data type. E.g. getting the bubble id of a custom data type makes sense but option sets dont have such a property. I think either the interfaces need to be made to match / there should be a differentiation in plugin builder interface between ‘app type’ of custom data and ‘option sets’?

Hi @shu.teopengco,
That’s how bubble works no… In my experience, you will probably need to override the browser history using js or some plugin (or maybe bubble has added a feature). That way the browser will consider it as previous page. Note that it isn’t at all related to env variables plugin.

If you’re looking for one-page app navigation system with ability to revert to previous view I recommend taking a look at Easylist element in the Utilities (bdk) plugin.

Thanks @gaurav, I did a work-around for now, just filter by the “Display” of All Options.

@gaurav Can you store a list of things within the env variable? I have a list of users that I wanted to store and access through a reuseable element, but everytime I set env variable it errors saying that I can only set a single item and not a list.

Can you store a list of things within the env variable?

Not at the moment but a wip

The user would then add another client using a backend workflow, where a new client is created.
When this happens I want the ENV variable to be updated, which triggers a workflow. This workflow then adds a the client in the ENV variable to the Easy List plugin, from where I can do searches of clients in the Db. 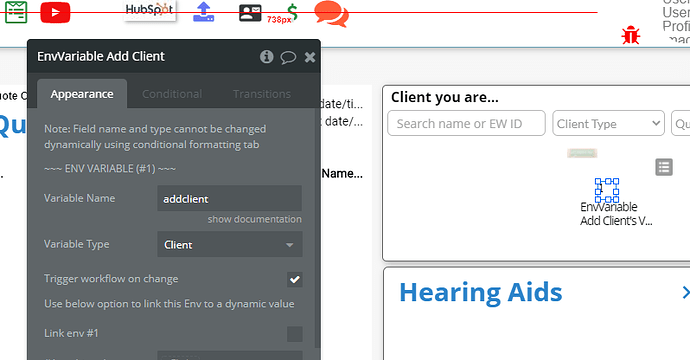 I know for a fact the new client was created as it updates the current user’s client and shows the name when I reference that, but not if I reference the ENV Variable.

Am I missing something? 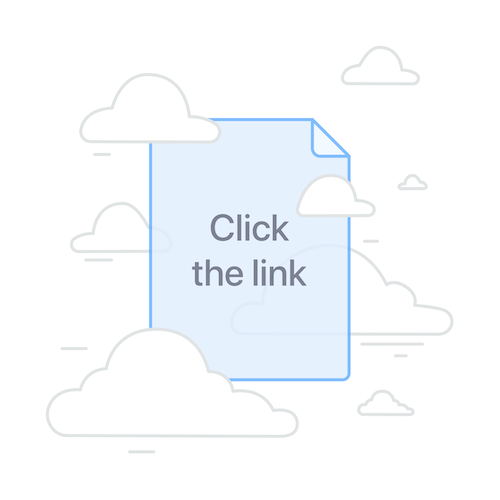 Here you can see the Backend Workflow running when I clicked the button in the video:

I am just wondering how I get support for this plugin if not via the forum?

Env variables are front-end only… they can’t be set in backend workflows. Backend workflows are run on bubble’s servers and plugins aren’t allowed to set data there. From backend to frontend, the only way of sending data is to use bubble’s database (i.e. save thing). 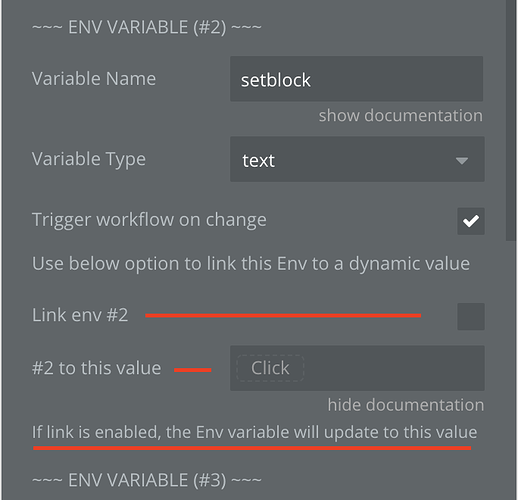 I am just wondering how I get support for this plugin if not via the forum?

You can reach out via chat at https://thebdk.com

That helps, I think what confused me is the fact that Set Env is an option in the backend workflow actions. Maybe this could be removed?

That’s weird… I have it set to a client-side plugin only… I can confirm this on my end too. Thanks for spotting @christo1!

@Bubble it appears this a bug with the plugin builder infrastructure. Client-side plugin action is showing up in Backend workflow. I’ve reported a bug (#11495).

Any idea when the list function will be ready? I thought it could do this and solve my preloading issue for a single page app, this would make my app 10x faster.

Hi @kevnobrega,
Don’t have an eta yet. I’ve recently been pretty inspired by Apple’s approach to programming and I think I’ll update this plugin to use that approach. This means rebuilding it from scratch so will take a fair amount of time. Eta is unlikely in the next month, but I’ll try to prioritise this.

Hi! Great plugin! How do I send a string variable from an HTML element to the env variable?

Would love to hear more about this approach, if you’re comfortable sharing.

The idea was to pre-load important data and be able to reuse it between different things without making more calls to the server. For example, I could have an env variable load a list of Clients and then use that env variable as the data source for multiple other elements. This could also be used to load info that will be needed later in the background to make the app appear faster.

Very interesting, @kevnobrega. I’m actually taking a similar approach. Since this plugin doesn’t currently offer support for lists, you might consider doing what I’ve done. I am using JSON Machine Pro and the Simple JSONata plugins to load and query structured data. I’m actually storing the entire UI configuration for my SPA as JSON in an Env Variable and then using the Sudsy URL routing plugin (along with the two plugins mentioned before and a lot of conditional logic) to decide what gets shown on the page at any given time.

This plugin allow to use JSONata syntax to query or transform a JSON. I made it to perform operations on complex data structures. For example, if I have list of values (from inputs in Repeating Group for example), I use JSON Machine to store all the data, then perform JSONata query/transformation to, for example, sum the values. More examples are available on the demo page. It is very usefull combined with other JSON plugins like JSON Machine. This plugin offers a better stability and a simp…

The paid sequel to the original JSON machine. Adds some very useful enhancements which are especially handy for (a) working with JSON server-side (b) storing a large number of states into a single JSON and saving to the user’s device The original JSON Machine Plugin Page Demo Page: Some benefits over JSON machine: read/write unlimited JSON values in a single operation. work with (read/write) JSON server-side OR locally. Save to / Read from browser’s storage (session storage and loc…

[icon-sudsy-page_500] Just wanted to announce an update to my flagship plug-in, Sudsy Page. It’s been serving me well since it was introduced, but a recent project presented an opportunity to extend its capabilities. Sudsy has always automatically recognized Bubble’s native Link elements, but now it can be configured to recognize any links on the page. This is quite handy if you want to trigger intra-page workflows (with no page reload) from links located inside…