Anyone interested in having a sound wave appear for audio files, there’s now an action to enable what you see below. It’s configurable and produces sound/bar waves for both audio and video.

To hide the vertical line, you’d set it to 1 width and the same colour as the background.

I’m trying to use the plugin but it seems to be loading the whole video from vimeo before playing it.

It takes a while to load before starting.
Even though we have selected the preload none option. 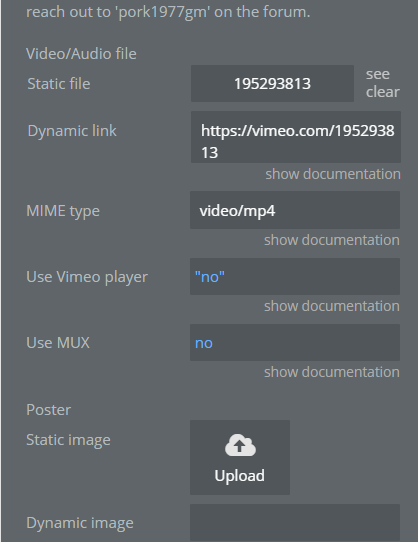 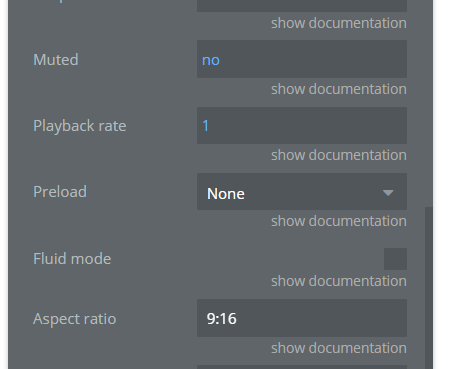 Can you please clarify if the video hosted on vimeo needs to be fetched completely before playback?

Hi @ZubairLK
I’ll take a look at this for you and get back to you soon.

Apologies for the delay, so you were right there was a minor bug with the preload option, it was being ignored for some reason so I’ve fixed that, tested it and it’s now working again. I’m in the process of finishing off the addition of a video recorder element, so once that’s all done I’ll push the update for you, probably tomorrow.

With regards to Vimeo files, they’re a bit of an odd one compared to how other formats play.
You pretty much have 2 ways of playing a Vimeo file. The first way is where the MP4 version of the file is retrieved and fed into the player (this is what you’re using based on your screenshots). The second way is allowing Vimeo’s own player to take control and play it.

Both options come with pros and cons really, whilst the first method has to retrieve the MP4 version of the file using an alternative service, it can occasionally take longer than expected. Once it has the file though, it’s then stored in a cookie to prevent subsequent calls trying to retrieve it again. There wasn’t an easy way to retrieve the MP4 version of the file, not without having a Vimeo PRO account where you can get at that file information directly using their API. I’m pretty sure this is Vimeo’s answer when playing through HTML5 players.

The second way is to select Yes to the option called “Use Vimeo player”. This invokes the Vimeo plugin and allows for Vimeo files to play directly within their own player. It’s nice and quick and just works, there shouldn’t be any delay either. There are however some major drawbacks with this approach! It uses outdated code (4 years old roughly) because the plugin itself isn’t maintained anymore because of various changes to Vimeo’s terms over the years. If you use this option, some actions may not work with the player. This might not be a problem depending on what you’re using it for but it’s something to be aware of. I wasn’t going to add this for a long time until the need came due to it being possible to set privacy settings which made it impossible for the first option to work.

Once I’ve pushed the update, try with the preload option of ‘None’ and see how it performs. I don’t think there’s much I can do to help with the delay but for the last couple of days there was issues with the proxy service I use to retrieve the MP4 file so it’s possible you’re delays were due to that problem. That’s all working again now so see how you get on. I did test your link you put up and it was almost instant for me but I know it’s not always like that and I am running the “preload” fix too.

I’ll put a post up on here once the update is ready anyway and I’ll have a look to see if I can improve the speed in other ways.

Thank-you for the detailed explanation.
Will try with the fix when its out.

In our use-case, we definitely need the timer events triggering (show a popup at configurable time durations) so cannot use the Vimeo player.

A quick question. We were able to upload the full video mp4 to bubble s3 itself. The file loads to s3 and should be reasonably fast.

There are essentially ~40 videos ~15 minutes long in the member area. The videos are intended to be 1080p. Used by phones. A limited audience of ~1000 people and just 2-3 months training. There will be busy periods but I doubt a 1000 will simultaneously try to load the same videos.

I’m guessing that s3 should be able to easily handle that kind of workload. I couldn’t really pinpoint if bubble hosting would be simple and sufficient in our use case.

Any idea if that is better/equally suitable. Any experience hosting videos on bubble s3 itself?

Ok no probs. If you can get them all into S3 then I would suggest using those URL’s to load into the player, that would definitely make them load a lot quicker. I can’t see any major speed restrictions you’ll run into although you may run into space limitations depending on the sizes of each video. I know there’s a limit on how much space you’re allowed in S3 and I think that would be dependant on the plan you’re on, but I’m unsure on what the limits are. There’s probably some info on the forum about that. @eve might be able to point you towards a link or give some advice here.

This update also contains a new element, videoJSrecorder.
To make the recorder work, you’ll need to also have the ‘videoJSplayer’ somewhere on your page. At some point I will make them work independently.

Here are the details for what’s included with this new element.

videoJSrecorder
This is the visual element dragged onto the page which contains the following field options. .

The demo page is here:
https://paul-testing-4.bubbleapps.io/recorder?debug_mode=true

Curious if there’s a workaround as I solely want to enable the captions. I also tried using the embed code url and forcing the cc_load parameter (which works in the browser), but not with the videoJS player.

Hi @gevestobs
I’ll take a look at that section and figure out what’s going on there.