I’ve released an advanced version of VideoJS plugin (using the latest version of v7.11.4) with a whole bunch of extra stuff included. You can load video, audio and images through it. 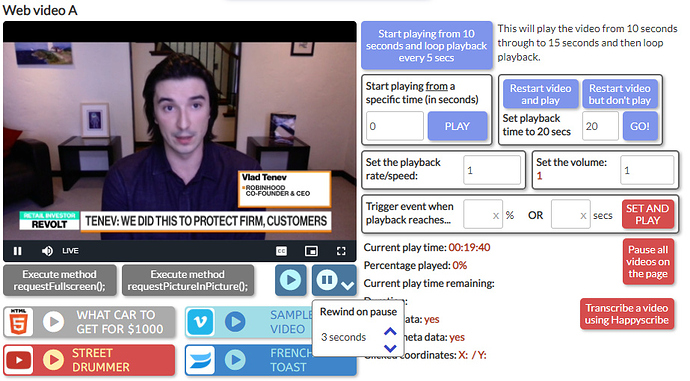 It will play all HTML5 playable formats, YouTube, Vimeo and Wistia videos and a handful of audio files. It also supports HLS, DASH, LIVE video streams (.m3u8) and some future HTTP streaming protocols. It also includes the latest VideoJS MUX plugin and has support for adding subtitles which you can create the transcriptions using the Happyscribe API endpoints (also included). All features listed below.

For MUX, you just need to provide your environment key and check the box shown here to send the data across. 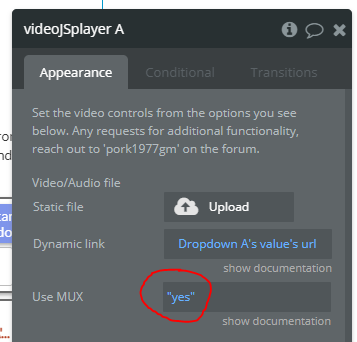 YouTube videos play in the YouTube player and all the standard YouTube controls for this player are included. All other video types will play in the VideoJS player, that includes Vimeo and Wistia (they don’t use their own native players) as to make sure all actions/controls work with those too.


Some features that are included:


A note on video URL’s

All videos take the full URL for the source with the exception of Wistia videos.
All you need for a Wistia video is the video ID. Take a look at the demo to see some examples, specifically the Video table. I may look into making this process a little simplier at some point.

To get the Wistia video ID, you can right click on any Wistia video, select “Copy link and thumbnail” and paste the contents of the clipboard into some text editor. 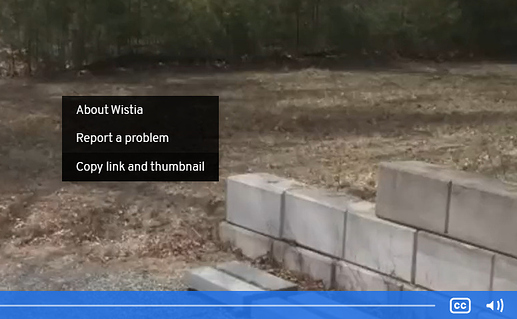 It will give you something which looks similar to this…

What you need here, is the value for wvideo so in the example above it is kjvkb1eroi.

Below outlines a list of all events, actions and documentation.
You can view the editor here: [VideoJS Advanced | Bubble Editor]( Paul-testing-4 | Bubble Editor)

videoJSplayer
This is the visual element dragged onto the page which contains the following field options.

Endpoints exist under both ‘Action’ and ‘Data’ The list below doesn’t outline all the API requests, there are a handful of Wistia ones also.

The HappyScribe API requests have all been tested and accept all available parameters. If you plan to use these, take a look at their documentation: Transcriptions – HappyScribe API

You can also refer to the Happyscribe integration demo page at: https://paul-testing-4.bubbleapps.io/transcription.

These are rendered images of scenes at specific time intervals of the video. This plugin accepts a single sprite image which can be created using this tool I’ve put together - Generate thumbnail sprite

Unfortunately, because this Pen is using FFMPEG, I can’t get it included within the plugin itself, although I have tried but it didn’t work without errors which is shame because I would have loved to automate the process for you but for now, you’ll just have to use this tool instead!

You need to pay attention to line 34 in the JS section which reads:

For most, you won’t need to modify this at all. I’ve made it fairly generic but depending on the duration (full length) of the video, it may need to be tweaked. I estimate up to about 20mins of playback might be the limit before it needs some modification. You’ll probably just want to change the 1/10 part of it to something like 1/15.

Explanation of what this does:
-ss 00:00:10 : Seeks to 10 seconds into the playback before anything is done.
-i name : The filename which you uploaded (no need to modify this).
-vf fps=1/10, scale=160:90, tile=10x10 : Filters which is telling ffmpeg to take a snapshot every 10 secs, setting the image dimensions to 160x90 and generating a tiled set of images (grid) 10x10 which can take up to 100 images.
sprite.jpg : Name of the output file which you will get prompted for download.

After you’ve uploaded your video, it’ll take a minute (depending on the size) then give you a download of the generated image file. You can then use this as part of the ‘load thumbnails action’ input.

When you use this action, make sure the settings are the same as what you used above. This will enable the player to accurately display the thumbnails at the correct scrubbing times. 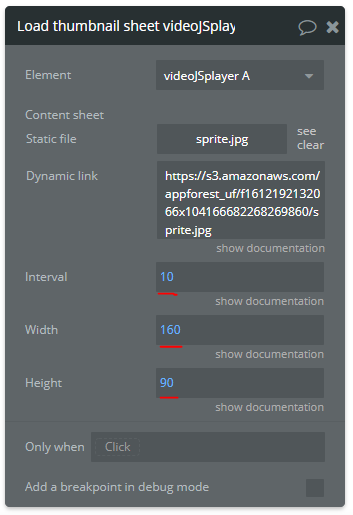 If anyone knows of an easier way to do this, I’d be very interested!
You can see this in action in the demo on the transcription page.

This sounds incredibly useful. Thanks for circling back! I will check it out this week.

Can this version or a customized version of it allow for live subtitle editing that shows on the video (inputted from a text editor)? Also burning said subtitles into the video?

That’s pretty cool but unfortunately it can’t do that right now. I will however look at adding something like, I like the idea of live subtitle editing. Where did that image come from? Is that from some other service or something?

I would be willing to pay for a custom plugin that can replicate what they do. If able and interested drop me a private message,

Sure will do. I’ll take a look for you.

Hi @phrase9, I’ve added all the Happyscribe API endpoints into the plugin, I think it’s now possible to build something. I’ll attempt to do just that in the demo soon.

Hey man thanks for the quick response. But just to be sure as i dont want you to do unnecessary work, does their api allow one to create the same thing or does it just let one send transcriptions to their platform? I may be wrong but I think it is the latter. Veed.io may allow for that though.

No problems and no worries about the extra work, I’ll keep this in anyway as it seems like a nice feature. As far as I can tell, you send a video over to them, they do the transcriptions and you can get all the data back. At that point you can manipulate it, do whatever and go from there. Give me a few days on this, it might not be exactly what you want but I’ll put a demo together anyway and if that’s no good I’ll play with Veed.io also. I’ll PM you in a few days after I completed the work.

Cool man. Will catch up with you in a few days. I am trying to do research on open source caption burning software. The actual transcription part of it should be straight forward using a google speech to text plugin but the challenge will be in the converting the text into captions, displaying the captions on the video player, and as an optional extra, burning the captions into the video.

Hi, I’ve been making progress, have just released an update which comes with a couple of actions to add subtitles/captions etc to a video and turn them on/off. I’ve been working on this demo page which you might find interesting.

It allows you to transcribe a video and then get the web VTT file which you can then load into the “add subtitles” action. Timestamps are supported and that so theoretically, if the file could be amended on the fly, like it being loaded into an editor, you could run the action every time it’s updated and the subtitles/captions changes will be reflected straight away. It’s proving tricky to create that but I’ll get there eventually.

Amazing work man. Looks like you really are getting there. I will inbox you in a few days time outlining precisely what I would like to achieve.

No probs and thanks!

Hi @pork1977gm, thanks for this plugin. For some reason I’m not able to play an mp4 file hosted with Dropbox (even though I add the URL parameter “raw=1” as specified by Dropbox). I can play this file with the other videoJS-based plugins, but not yours. Any idea? Here is my test page: testingenvironment | Bubble Editor

I shall look at that, give me a bit and will get back to you.

Ok I’ve fixed it so will release an update a bit later on today.

Amazing, thanks a lot!

There’s been a number of updates since putting this together. It’s kind of turned from a video player to an all in one media player really. So it now handles audio and videos files and it can also be used as an image viewer. Animated gifs will play through it, transparent vectors will load up and I’m sure I can make handle more formats if requested.

I had some issues with trying to pause videos when the element was buried inside a repeating group. This is now resolved so whatever media it is playing at that time will be stopped when the element gets made “not visible”, regardless of where it lies on your page.

Just keeping the instructions in this post up to date.

There’s a new action included which allows you to load a series of video ads into whatever main video you have loaded. It only supports MP4 videos at the moment and the action detail pane looks like so…

@pork1977gm this is a very useful plugin for my MVP. Our users are creating video’s using Wistia + Soapbox. My only question is there a way when I add Wistia video id from the url to pull engagement stats of the video. For instance Wistia tracks when a video was stopped, played, how many clicks etc. On my platform we want to be able to show each user engagement on their video. This is Wistia’s API that tracks engagement.

Learn how to access your stats via our API.