Only now I’m creating a dedicated thread for this plugin

Pass a list of texts that are email addresses and you’re green!

Just make sure you send through the broadcast message stream if you’re, well, broadcasting instead of sending transactional emails.

But there’s more! I also implemented an email body variable mechanism so you can send customized emails for each recipient with this batch action!

Here’s the blocky explanation of it and after it a couple screenshots:

This works with both HTML and Plain text email bodies.

Example, say you want to use the customer’s name, so you can write the email like this, without quotes:

Then in the Var 1 field you pass a list of names (list of texts) so each email will replace that {{var1}} with the respective item in the text list, in other words, the first email will pick the first name of the list. Of course var2 works the same way, in this example it would be a list of texts containing phone numbers, something like “54984”.

Take a look at another example and its result:

At one of my personal emails:

At another email of mine:

Loads of us were waiting for it.

Thanks a lot for taking the time to develop this feature.

Now the question (I guess you expected that coming, hehe): how do you send to more than 500?

It’s actually a limitation within Postmark itself only allowing a max of 500 emails to be sent in 1:

So you could do something like this on your first action: 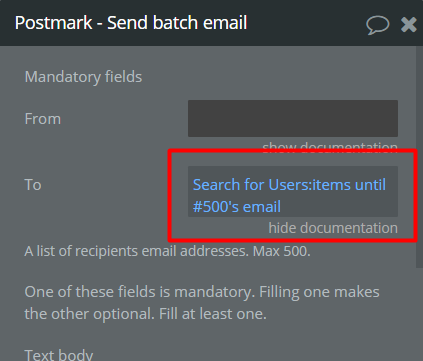 then on your second action

Can you apply a template to the email? I don´t see where to add the template ID.

Nope, no template yet. Maybe in the future we can do so.
To have pretty emails you can use the html body (:

I have one question: is there any way to capture the api response from Postmark – I’d like to be able to store and reference the MessageID for inbound parsing. Thanks for any advice!

The plug-in looks awesome. Where can I find instructions on how to set it up? Do I just generate Server API Keys and paste them and then I am good to go? Where do I get the API Key for the dev. version?

Any pointers to a tutorial would be great. Thanks again for all you do for the community

Do I just generate Server API Keys and paste them and then I am good to go?

here do I get the API Key for the dev. version?

It’s the same key, just paste it there too.

Any pointers to a tutorial would be great. Thanks again for all you do for the community

Use the “Send email” workflow action, all instructions are inside it.

Excellent plugin @vini_brito
Once again thank your for your contribution to bubble community with your plugins.

I have one question, I save the url of the file in my database and I want to send it by email, but I could not. Could you give a clue to send file attachements?
Thanks a lot,

I actually saw this question and was a bit puzzled because I’ve never sent an attachment though Postmark myself. However, I did see this blog post: Send Email with Attachments using Postmark API

I’d give it a try, and see if that works

Hi Edwin! Try passing a list of files in one of the last fields of the “Send email” workflow action

This is what I got when trying to attach a file. Not sure why it isn’t working?

Ahh, got it to work for anyone running into the same problem