Is there any available documentation on integrating with Salesforce? Anyone have any experience about using Bubble on top of SF?

We’ve integrated salesforce for some users but it’s quite customized at this point. We can talk about it if it’s necessary for your app. it might require some custom work but email us at [email protected] and we’ll take it from there.

What are your basic requirements and what kind of documentation you are looking for?
If you are new to this then it may seems bit complicated for you. But you can take a look at basics here
h t t p://knowledge DOT hubspot DOT com / salesforce-integration-user-guide-v2

Replace DOT to . and remove before after spaces " / "

Hi, my main objective for using bubble is to create mobile apps that connect to salesforce data API.
You mentioned that it needs custom work though.

How can I proceed with this? Do update me on how the process is and the related costs.
Thanks

We integrated with Blockspring that has a few blocks that connect with salesforce. Can you check, maybe you can do a lot with that. See this https://open.blockspring.com/tags/440

If that doesn’t do it, best is to reach out by email at [email protected], as I’m guessing this can be quite custom based on your need.

You should consult with professionally expert salesforce developer who can guide you throughout. A guy I last hired for my app development was working with Ficode.

I am a Noob on Bubble and have been playing with the BlockSpring plugin for Salesforce. After a few days of playing around I seem to have found some major limitations and wanted to see if anyone knows a way around it.

For example if I create a Query “Block” for the Accounts Object in Salesforce I can’t then create second Query for the “Contacts” or “Opportunities” objects because it over writes the previously created query. I am assuming it’s not a bug, just a limitation as there is no way to create a name for a block.

I have managed to get around it to a certain extent by creating blocks using each type described above but that still limits me to 4 objects and it is messy.

I also tried to changing the Data source Query and fields. It will let you do this however the issue is that the “Things” field options don’t update to reflect. They stay the same as the original query used to create the block. See below for an example of what I mean.

Here I have changed the Query from the Opportunity Object (the origional query to setup the block) to Contact Object for this repeating group. I also changed the fields to what I needed
. 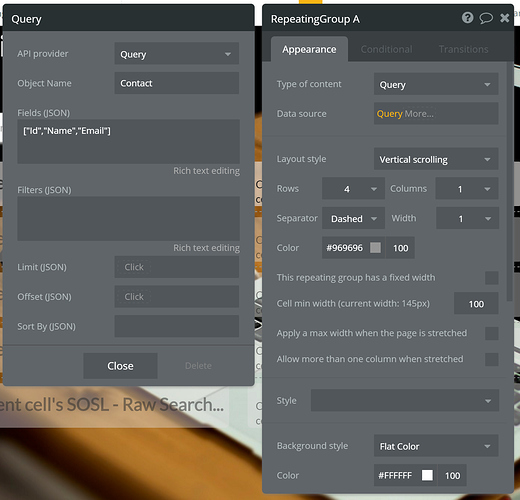 Now if I go to access the Query data (below) I only get the fields that where originally used to create the block and not email as configured on the query. 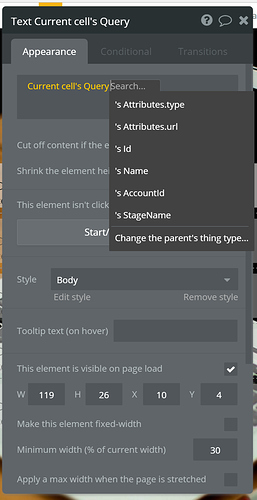 Interestingly in the above example it will return the name field of the Contact object rather than the Opportunity Object which means the Query function is doing it’s job it is just that I can’t access them because the Bubble fields won’t update.

So is there a (non messy) way around this or do I need to hope an prey the plugin/bubble gets an update to fix the limitation?